Accessibility links
How To Stay Safe During The Egg Recalls : Shots - Health News To minimize salmonella risks, cook eggs well  and wash your hands before and after handling them.

How To Stay Safe During The Egg Recalls

How To Stay Safe During The Egg Recalls 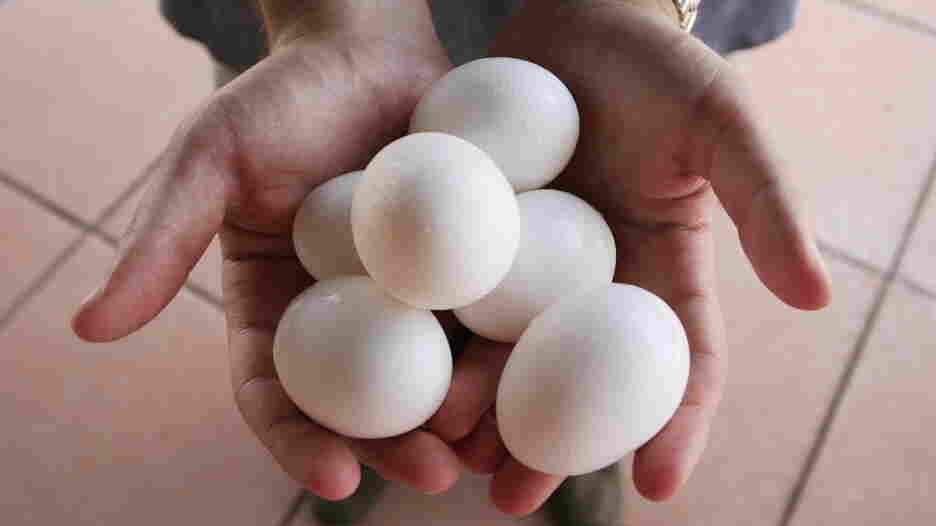 Some 1,300 people have become sick with salmonella and more than half a billion eggs have been recalled because contamination fears. So what's an egg-eater to do?

We listened in on the full interview. Some of her questions and his answers were edited for length.

How did these eggs get contaminated to begin with?

Schaffner: Salmonella are contained within the hen's intestinal tract. As the egg comes out, the egg's surface of the shell can be contaminated by fecal material from the hen. However, the hen can also be infected and -- as it's creating the egg -- introduce the salmonella into the interior of the egg. So the egg can be contaminated both on the outside and on the inside.

We hear about eggs and salmonella quite a bit. Are eggs particularly dangerous or efficient at harboring salmonella?

Well, they're very common. And because we like to consume them semi-cooked frequently -- and even occasionally raw -- there's a hazard.

Would it help to buy organic or cage-free eggs?

I've never seen data to suggest that those chickens are less apt to be salmonella-infected. They might be because, basically, they're farmed the way they used to be in the old days -- when farms had smaller flocks. Here, you have these gigantic egg-laying factories. And you can see that there are many opportunities for much wider contamination of the eggs.

Can you kill salmonella by cooking the eggs?

Yes, absolutely. The recommendation is to cook eggs thoroughly. No more soft-boiled. No more loosely scrambled. And no more over easy. Cook them very thoroughly.

Is salmonella a reality of modern food production? Is this just unavoidable given the scale of production?

In our modern environment, we create circumstances where salmonella contamination can be distributed nationwide. Our foodstuffs used be acquired locally, and so you would have small outbreaks of salmonella. Now, what happens is if you have a contaminated product, it can be distributed over the entire country -- or large portions of it. And so, the opportunity for very large outbreaks is much more now than it used to be.

Is pasteurizing an option?

It looks to be. There's a technology, that the folks that do this claim, that will not alter the taste or the utility or the mouth feel of eggs. And you can pasteurize them. That not only cleans the outside but kills the bugs in the interior of the eggs. It's not widely used yet and there's some people who suggest, "Well, maybe the eggs don't taste exactly the same."

How worried should people be? Is this as scary as it seems?

It's a bit scary, and I think we ought to be cautious. We ought to, when we use eggs, be careful. Wash our hands before and after egg preparation. And cook them very, very thoroughly.