Accessibility links
Pitching Phenom Strasburg Faces Elbow Surgery : Shots - Health News The season is over for the Washington Nationals' star pitcher Stephen Strasburg. He's expected to undergo Tommy John surgery to replace a torn ligament in his right elbow. If all goes well, he could be back in pitching form in 12 to 18 months. 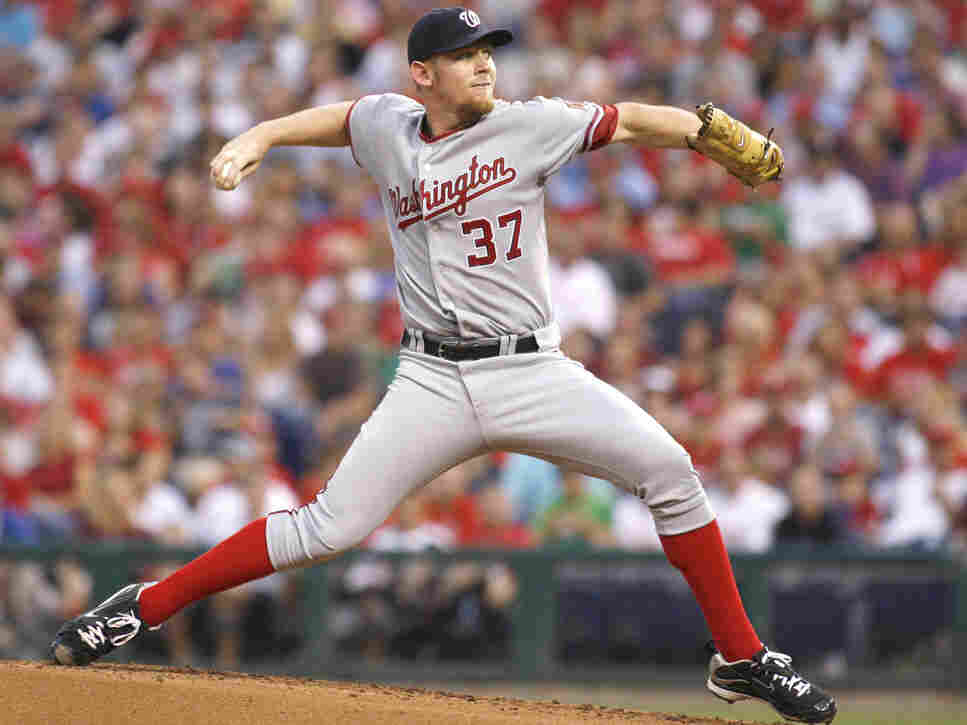 Washington Nationals' starting pitcher Stephen Strasburg throws against the Philadelphia Phillies in the first inning of a baseball game Aug. 21 in Philadelphia. Strasburg was removed from the game after complaining of arm pain, and the Nationals now say it is likely he will have to undergo ligament replacement surgery. H. Rumph Jr./AP hide caption 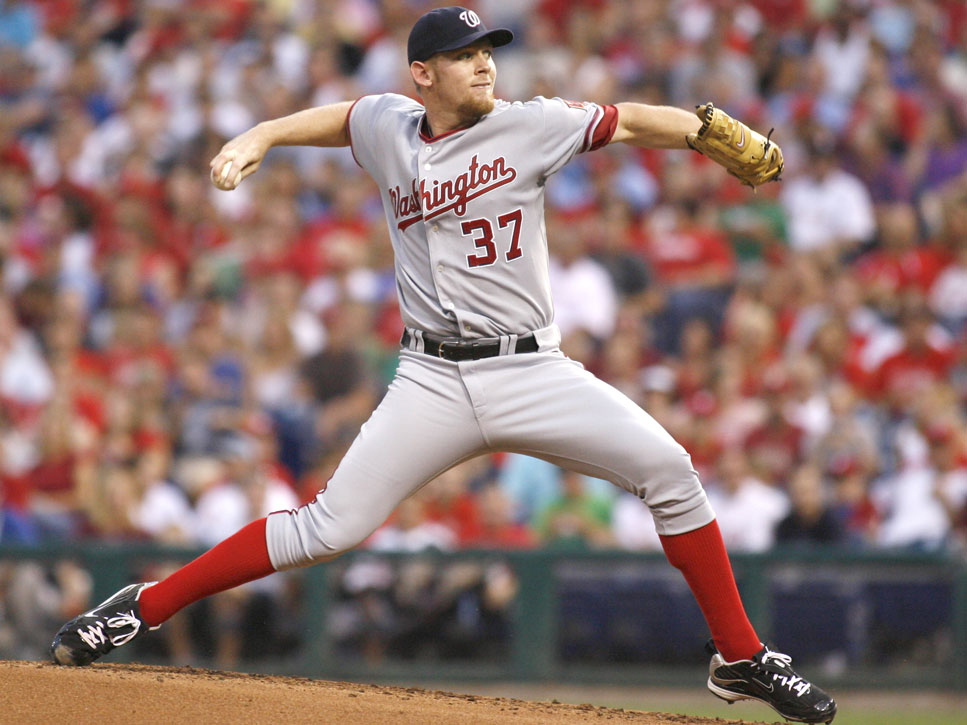 Washington Nationals' starting pitcher Stephen Strasburg throws against the Philadelphia Phillies in the first inning of a baseball game Aug. 21 in Philadelphia. Strasburg was removed from the game after complaining of arm pain, and the Nationals now say it is likely he will have to undergo ligament replacement surgery.

You don't have to live in Washington or even be a fan of the Nationals to have rooted for pitcher Stephen Strasburg, the most heralded rookie pitcher in at least a generation.

Strasburg got pulled from a game against the Philadelphia Phillies last Saturday after experiencing pain in his elbow, and you can see a video recap of his trouble here.

So, it's a real bummer to learn today that the 22-year-old right-hander has got a torn ligament in the elbow of his pitching arm. He's going for a second opinion in California, but the Nationals expect him to have Tommy John surgery to fix the problem. He'd be out 12 to 18 months afterward.

How does an injury like this happen? Levine told us it's a wonder that pitchers don't have these problems even more often. The forces on a pro pitcher's elbow are far above those that can tear a ligament in the lab.

Conditioning and good mechanics are what keep most pitchers in the game. Even so, the stress on the ulnar collateral ligament, the one that Strasburg damaged, can cause small tears that hurt a pitcher's power and durability over time, and eventually land him in the hospital.

"What's unusual in Strasburg's injury is that it's an acute event," Levine says. Sometimes this elbow ligament can pop, but more often, he says, the damage is gradual.

Can Strasburg's arm be fixed? Probably. Tommy John surgery, named for the Dodgers pitcher who overcame a 1974 tear with a surgeon's help, has a pretty good track record.  "If you've already become an elite athlete, the success rate is 70 to 80 percent" at least, Levine says. By some estimates, the success rate for first-time patients is as high as 85 percent.

In the procedure, surgeons usually take a tendon, which connects a muscle to bone, from somewhere else in a pitcher's body and use it to replace the torn elbow ligament. Levine says the replacement is "as strong or stronger" than the original ligament.

The most likely spare for Strasburg, and anyone else who has the surgery, is the palmaris longus tendon in one of his wrists. "It's kind of like the appendix of the forearm," Levine says. "It doesn't serve any real function."

About 10 percent of people don't have one though. If that's the case for Strasburg, the surgeons could use a knee tendon or even one from a toe. It's also possible to use one from a cadaver, Levine says, but that's not his first choice.

Whichever tendon the surgeon uses, Strasburg faces a long recovery. The Nationals say Strasburg could miss all of next season. And that wouldn't be unusual. Levine says it takes 12 to 18 months to return to form, longer that the recovery for any other orthopedic procedure.

"It's a matter of letting the ligament heal in the bone socket," he says, then a long process of reconditioning and rehabilitating every part of the body involved in a pitcher's motion -- from his feet on up.

"Sometimes the guys who've had it say it's takes up to two years before they feel they're completely back," says Levine.

So assuming Strasburg has the surgery and it's successful, will he have to change the way he throws, we wondered. That's hard to say and something the Nationals will probably spend a lot of time figuring out.

"Is there something he's doing to get to 100 mph that put him at increased risk?" Levine asks. "It's a rare thing to see a guy who throws the way he throws."

So there might be something in his pitching motion that upped the odds for a problem, or it could be just a freak accident, says Levine.

Finally, Levine points out that Strasburg's prognosis is far better than a teenage pitcher might have. Serious injuries, like Strasburg's torn ligament, are rampant among young athletes who overwork their bodies.

And those early injuries are far more likely to end a young person's future in competitive sports. "So many parents and coaches out there don't understand that they're contributing to this epidemic," Levine says. For more information, go to StopSportsInjuries.org