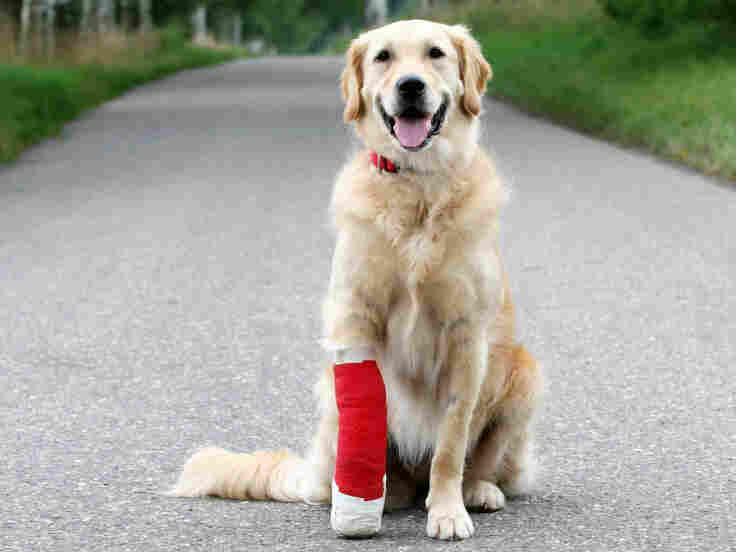 If you charge it, fixing Fido can cost more than you think. iStockphoto.com hide caption

Among the health care providers Cuomo claims are preying on vulnerable patients are some you might not expect: veterinarians.

As anyone who’s had a sick pet knows, however, charges at the vet can add up fast. Last year, while looking at health insurance for pets, NPR's David Kestenbaum found a hedgehog whose cancer care cost $2,700.

Back in 2003, Consumer Reports found veterinary care could be pretty pricey. Repairing a broken limb cost $350 on average. A doggy pacemaker could set you back $3,000. A simple wellness visit for a geriatric cat can cost as much as $340, the study found.

But few people have insurance to cover the bills.

So Cuomo's investigation focuses on health care credit cards, which he claims claims health care professionals pressure consumers into applying for. If the consumer puts the charges on the card, the provider gets paid within a few days. And, according to Cuomo, at least one card company gives practitioners a rebate of the fee they’re charged to offer the cards based on how much they generate in sales.

Although complaints about dentists predominate, consumer advocates say veterinary practices come in for their share of criticism, too.

The cards can be tempting to cash-strapped consumers. They often offer zero-interest loans during a promotional period of six months to more than a year.

But if the consumer doesn’t pay off the bill during that time, interest in excess of 25 percent is typically charged on the full amount, going back to the original date the service was provided.

Consumer advocates say there are other problems with the cards as well, including cases where consumers were misled into thinking they were signing up for an extended payment agreement with their provider rather than a credit card.

"Our advice is to steer clear,” says Mark Rukavina, executive director of the Access Project, a  Boston-based nonprofit that helps consumers resolve medical debts. Unless you’re confident you have the resources to pay off the amount before the teaser rate ends, "It will often just increase the pain."