Accessibility links
5 Big Health Issues On Campus : Shots - Health News Dropping off your wide-eyed 18-year-old on campus for the first time? Here's what college health officials say students and their parents need to keep in mind for a healthy school year. 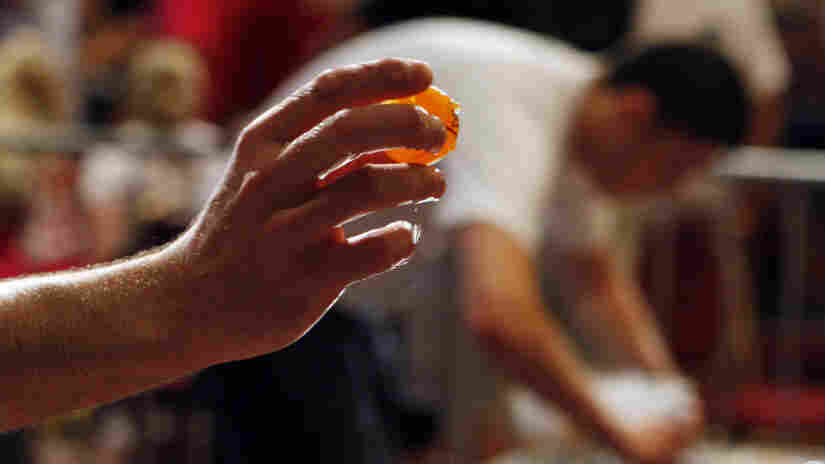 A young man is about to toss a ping pong ball emblazoned -- getbombed.com -- at  World Beer Pong Tour competition in Atlantic City, N.J., in June. What started out as a college drinking game has blossomed into a nationwide competition with a $25,000 first prize. Mel Evans/AP hide caption

This time last year college kids were stressing out about swine flu, hard as that is to believe in hindsight. With students streaming back to campuses, we wondered what health concerns are topping the agenda now.

We checked in with Dr. Al Glass, president of the American College Health Association, and the heads of health services at some colleges around the country to get a lead on what students face this time around.

Here are their top five issues:

Dr. Susan Even, director of the University of Missouri's student health center, agrees. At Mizzou, which is expecting a record enrollment this year, adjustment to a big school just compounds the problem, she says.

"College and university students tend to keep schedules that are really different from people who are out having jobs in the world," Glass says. Unfortunately, that's nothing new. Only 11 percent of college students in a sample of 191 undergrads had good quality sleep, a 2001 study in the Journal of American College Health found.

Although some students died from swine flu last year,"it didn't turn out to be the pandemic of illness that people were worried about," says John H. Turco, director of the Dartmouth College health service.

Still, the focus on H1N1 led to cultural changes at Dartmouth, Turco says. More people became aware of disease prevention and use of hand sanitizers has become routine.

Glass says infectious disease is a perennial concern. There's no particular bug on the radar this year, but "exposure to other infectious illnesses -- colds, upper respiratory infections, influenza" are inevitable.

Vaccines can help against some of the usual suspects. The Centers for Disease Control and Prevention recommends these for teens and colleges students.

Weight problems are everywhere, even college campuses. So what else does the CDC recommend? Exercise.

Adults should be active at least 2 1/2 hours a week. But some students may not be getting enough. Glass says too many college kids aren't heeding the advice and warns that college students aren't immune to the obesity epidemic.

Glass says a discussion about college health wouldn't be complete without talking about alcohol use.

"If [students] would make the decision to drink in college -- which, certainly, we're all aware a large number of them do -- to make those choices about what to drink, how much to drink those kinds of things need to be optimally made in a very responsible way," Glass says.

According to the National Institute on Alcohol Abuse and Alcoholism, about 4 in 5 college students drink. And when asked, 2 in 5 say they've been on a drinking in the past few weeks. Nearly 600,000 college students are injured while under the influence of alcohol each year.