Accessibility links
A Portrait Of Health: Prescription Drugs In America : Shots - Health News Kids tend to take medicines for asthma and ADHD. For older folks, drugs to treat blood pressure and cholesterol are most common. The proportion of Americans taking at least one drug has risen to 48 percent, the CDC says.

A Portrait Of Health: Prescription Drugs In America

A Portrait Of Health: Prescription Drugs In America 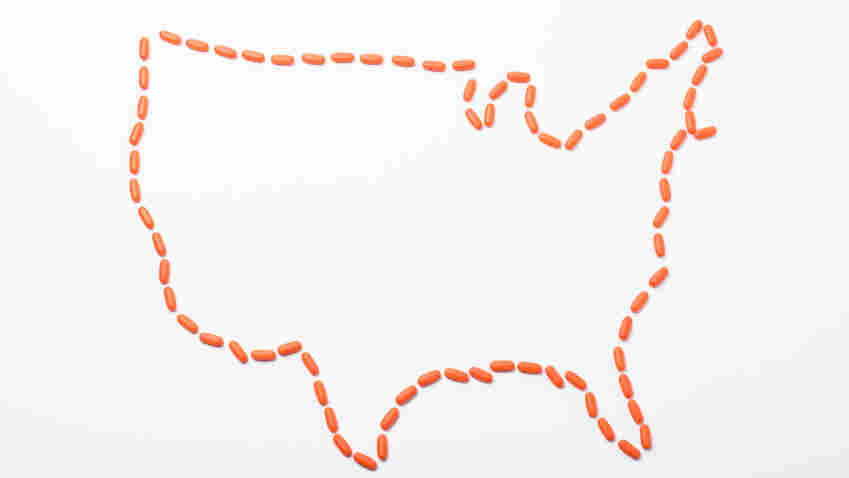 Prescription drug use is up in the last 10 years, with about 48 percent of Americans now taking at least one medicine. Greg Martin/iStockphoto.com hide caption

If you tell me just a little bit about yourself, I can make a pretty good guess about the prescription drugs in you medicine chest.

For starters, if you live in the U.S. I'll guess you're taking at least one prescription drug. I'll be right about half the time, according to data just published by the Centers for Disease Control and Prevention.

Who's on what? The top choices vary by age.

Kids (aged 11 and under) are big users of asthma drugs -- 9.6 percent of their prescriptions.

Adolescents (12 to 19) also take a lot of asthma drugs, but the most frequently prescribed medicines for this group are for ADHD -- 6.1 percent of prescriptions.

Adults (20 to 59) are most likely taking an antidepressant -- 10.8 percent of prescriptions -- followed closely by painkillers at 10.1 percent.

Older Adults (60 and up) are, as you might expect, the group that's taking the most medicines. Some 44.9 percent are taking a drug to treat cholesterol. Next most popular are two types of blood pressure meds, with 26.4 percent taking a beta blocker and 19.9 percent taking a diuretic.

Nearly 9 in 10 older people take at least one prescription drug. And, 36.7 percent of them take five or more drugs.