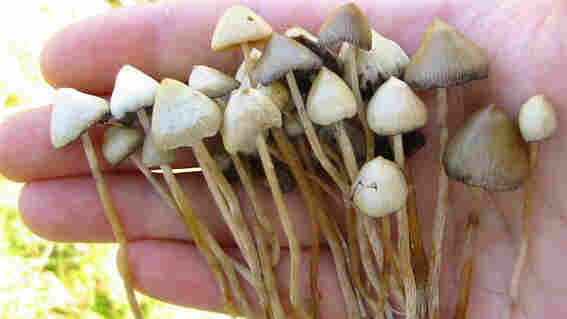 The hallucinogenic compound found in psilocybin mushrooms like these is getting a fresh look as a medicine to help patients cope with terminal illness. Wikimedia Commons hide caption

Is it time to give hallucinogenic drugs for medical use another try?

Some researchers in California make that case in a study of a dozen patients with advanced cancer. The patients, 11 women and 1 man, received a low dose of psilocybin, the active ingredient in "magic mushrooms" in one session and a placebo, consisting of water and the B vitamin niacin, which causes flushing, in another.

On a couple of measures of mental health, the patients showed less anxiety months after treatment and a big improvement in mood even a half-year after a single psychedelic session.

To be sure, this study, billed as a pilot test, had some flaws, most notably that each patient served as his or her own point of comparison, or control. And the researchers concede that it was pretty much impossible for the patients not to know pretty quickly whether they were getting the drug or the dummy medicine in a given session.

Also, among the patients, all volunteers, eight had previously taken hallucinogenic drugs. Four of them had tried such drugs decades before the experiment.

Still, nobody had a bad trip, the researchers said, and there was no evidence of physical or mental harm during the study, the first since the 1970s to explore the possible usefulness of psychedelic drugs in helping seriously ill patients cope with anxiety and the end of life.

The results were just published online by the Archives of General Psychiatry.

The scientists conclude the findings are strong enough to support further research. And there are some other studies already under way, including one at New York University that aims to enroll 32 patients.

One of the funders of the pilot study and the bigger one at NYT is the Heffter Research Institute, a nonprofit that specializes in the science of hallucinogenic drugs.