Accessibility links
Diet Pill Drama Continues, As FDA Weighs Old And New Drugs : Shots - Health News A panel of experts looks at lorcaserin, an experimental diet pill, the day after splitting on whether to leave the controversial weight-loss medicine Meridia on the market despite heart risks.

The latest experimental pill angling to become a part of America's fight against obesity is getting a grilling just outside Washington today. 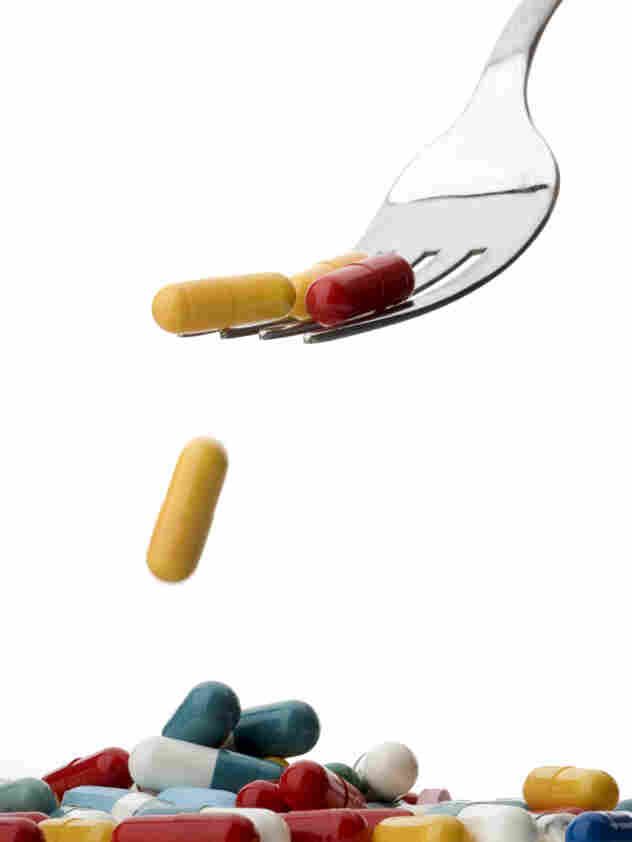 The prospects for new diet pills appear to be slipping away. Milos Luzanin/iStockphoto.com hide caption

A panel of experts advising the Food and Drug Administration is mulling Arena Pharmaceuticals' lorcaserin, the second of three new diet medicines in the queue right now at the agency.

The odds are long. In an assessment released ahead of the hearing, FDA scientists flagged "three noteworthy safety issues" with the new drug, which the company wants to market as Lorquess.

The potential hazards include damage to heart valves; mental health problems, including dizziness, abnormal dreams and memory trouble; and cancer, which was seen in rat studies but not human tests.

Against those risks, the benefits of lorcaserin were pretty modest. Overall, the drug barely helped people lose 5 percent or more of their body weight -- the key effectiveness threshold defined by FDA.

If you're interested in a blow-by-blow account of the hearing, check out the live-blogging by TheStreet.com's Adam Feuerstein.

The context for the panel meeting doesn't bode well for lorcaserin either. Yesterday, pretty much the same group split in a vote on whether to take diet pill Meridia off the market because of cardiovascular risks.

Earlier this summer, the advisers to FDA voted to tell the agency that it shouldn't approve Qnexa, the first pill in the new crop of diet drugs to get a going-over.

So the odds for magic pill to help the growing number of Americans deal with their weight problem don't look so good. But we won't know for sure until the FDA starts rendering its decisions.

Update: The panel voted 9 to 5 against approval of lorcaserin because the benefits don't appear to outweigh the risks.

In a statement, Jack Lief, president and CEO of Arena, said the company and its partner Eisai of Japan, "believe that lorcaserin has a positive benefit-risk profile. Arena will work closely with the FDA as the agency completes its review" of the application for the drug's approval.