Accessibility links
Where Your Brain Figures Out What It Doesn't Know : Shots - Health News There's a spot near the front of your brain where scientists believe you come to terms with what you know and what you don't.

If you've ever watched Who Wants to Be a Millionaire?, you've watched people engaged in something called metacognition. 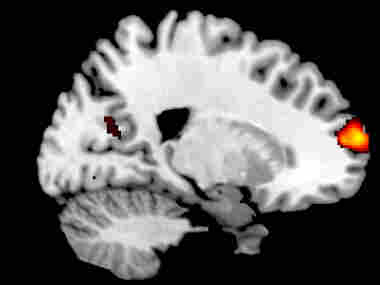 The highlighted spot in the gray matter of the brain is where you figure out what you you don't know. Science/AAAS hide caption

Contestants not only need to answer questions. They need to assess how confident they are in the cognitive processes in their own brain that produced the answer.

"You might have the opportunity to ask the audience or phone a friend," says Steve Fleming, a neuroscientist at University College London. But, he adds, "You need to know how sure you are about your own answer before you opt to use those lifelines."

That sort of self-monitoring is something we do all the time. Am I sure that person's expression is friendly? Do I really know the route to the train station? Is the man who just stepped onto the elevator really named Bob?

Researchers have found that some people are better at this than others. And the reason seems connected to a bit of brain just behind the eyes that helps us assess how confident we are in our knowledge and decisions, Fleming says.

Fleming and a group of researchers discovered this after studying 32 volunteers who played a computer game that's a bit like Who Wants to be a Millionaire, but without the big money.

Participants had to identify a patch of screen that was just slightly brighter than the rest of the screen. And every time they did this they had to say how confident they felt about their choice.

Then the researchers scanned the brain of every participant. And they found something.

"We isolated a region of the prefrontal cortex, which is right at the front of the brain and is thought to be involved in high-level thought, conscious planning, monitoring of our ongoing brain activity," Fleming says.

In people who were good at assessing their own level of certainty, that region had more gray matter and more connections to other parts of the brain, according to the study Fleming and his colleagues published in the journal Science.

She says knowing which parts of the brain carry out this process could help people with problems like schizophrenia or Alzheimer's.

"There are elderly patients who are becoming demented and some of them know that this is happening and some of them don't," Metcalfe says. "So if we're going to help those people it's really important to know what the brain correlates are."

The study could also help scientists figure out why some people with healthy brains do such a bad job judging their own mental abilities.

She says people are especially bad at judging their own skill at reading another person's emotions.

"In fact, there was one study where people who are narcissistic would say they are really spectacularly good at this and they were actually worse than everyone else," Metcalfe says."

But there may be hope for people who aren't good at knowing what they know, Metcalfe says. There are hints that people can improve with lots of practice.