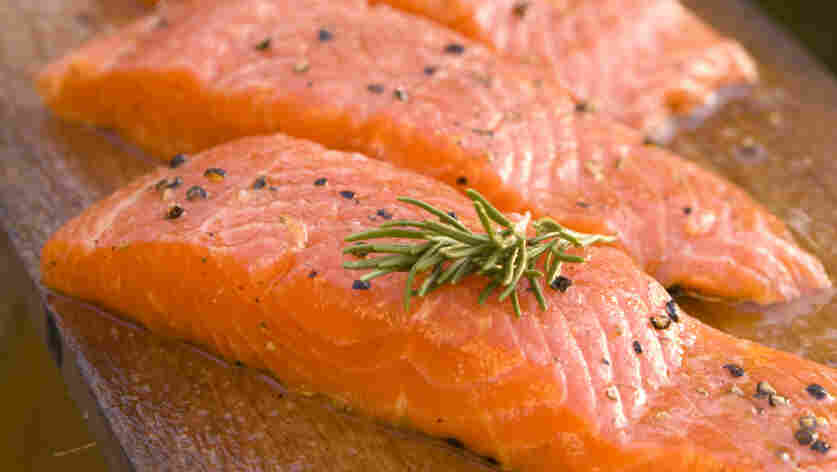 It may look like a salmon and taste like a salmon, but consumers aren't so sure about genetically engineered salmon. AquaBounty Technologies hide caption

If you build it he will come, a ghostly voice famously tells Kevin Costner in Field of Dreams.

But if scientists build an Atlantic salmon that grows twice as fast as regular salmon, will consumers eat it?

That's the question on a lot of peoples' minds today as the Food and Drug Administration wraps up a three-day series of meetings on a proposed new salmon -- the first genetically engineered animal designed for human consumption.

An advisory committee of animal health experts suggested yesterday that based on studies submitted by the the salmon's sponsor, AquaBounty Technologies, the salmon would be safe to eat and safe for the environment. Some members wanted more information on those fronts, but no one on the panel outright opposed it.

But the public comment part of yesterday's meeting illustrated just how strongly many consumers feel.

"There's a dangerously limited set of data... what's the rush?" she said.

Several scientists, including aquaculture technology expert Yonathan Zohar, say it is safe to eat and essentially the same as regular salmon. Plus, when grown the right way -- in self-contained pens on land -- it can preserve the environment and boost production of an important food source, Zohar says.

Fish are "the last major hunt and gather crop," he says. We don't hunt for chicken or beef or pork. The ocean cannot give any more."

But consumers aren't buying it, especially because it seems that the agency does not appear inclined to require labeling.

"FDA should require labeling to insure that any unexpected or unintended effects of engineering this salmon ... come to FDA attention," said Michael Hansen of Consumers Union. In a poll the group commissioned two years ago, 95 percent of consumers said food from genetically engineered animals should be labeled.

The agency has said there's no material difference between the flesh of the GE fish and the flesh of regular, farm-raised Atlantic salmon. Therefore, the law says they can't require different labeling.

Not so, said Margaret Mellon of the Union of Concerned Scientists. "It is against the law to withhold from the public information that's material, and I think information about whether animal foods are genetically engineered is highly material to all kinds of people," she tells NPR. "I think it is within the power of the FDA to interpret that term that way - they are simply refusing to do it, they are not incapable of doing it," she said in an interview last week.

More testimony from consumers on the labeling issue is expected at today's session. FDA hasn't said when it will make a final decision on the genetically engineered salmon - but the company says if it is approved, it could take about two years to bring the fish to a market near you.

So, what did scientist Mellon say when we asked her if she'd eat it?" My concern is, I'm not going to have a choice," she replied.