Accessibility links
Experimental Heart Valve, Without Surgery, Shows Promise For The Elderly : Shots - Health News A heart valve that doctors can implant with a catheter may help patients too frail to undergo open-heart surgery to repair a defective aortic valve.

Experimental Heart Valve, Without Surgery, Shows Promise For The Elderly

Experimental Heart Valve, Without Surgery, Shows Promise For The Elderly

Aortic stenosis is a nasty disease. The main valve regulating blood flow out of the heart gets stiff, leathery and constricted. Within two years of the first symptoms, half the people with the problem are dead. 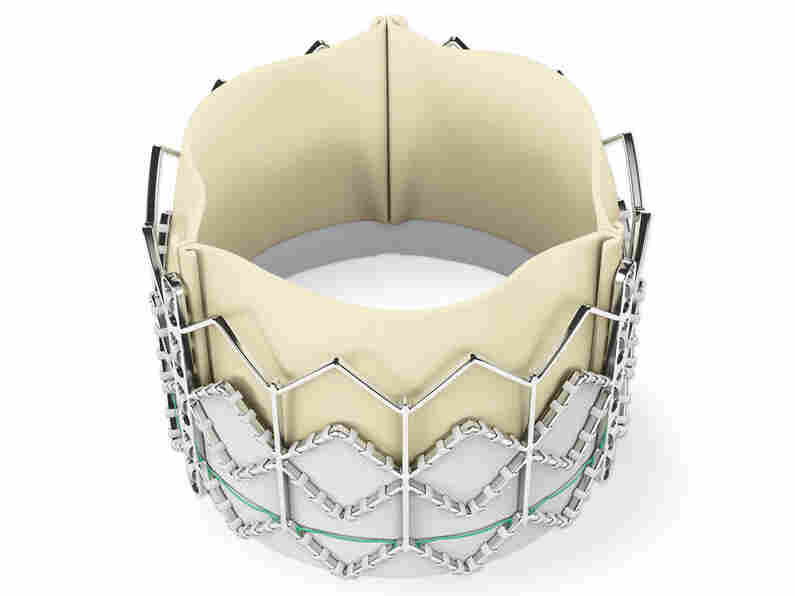 Heart specialists can implant this valve with a catheter instead of an open-heart surgical procedure. Edwards Lifesciences hide caption

The traditional treatment is surgery to replace the ruined aortic valve. But as the population ages, the growing number of people with the disease includes more and more who are too frail, or too sick with multiple diseases, to withstand open-heart surgery. By some estimates that's as many as a third of those with severe stenosis.

Results from a study being presented at a heart meeting in Washington today show that a new, non-surgical approach could give these high-risk patients a much better shot at living longer with fewer symptoms. (For a video look at how the procedure is done, click here.)

The results were just published online by the New England Journal of Medicine.

The procedure involves an artificial aortic valve, made from pieces of a cow's valve sewn to a metal frame. The assembly is crimped so it can fit through a tube, or catheter, that doctors thread through an artery in the leg up to the heart.

The prosthetic valve is positioned within the patient's faulty valve, then expanded with a tiny balloon and fixed in place.

The whole thing takes about 90 minutes compared to up to six hours for traditional open-heart valve replacement. Recovery is days instead of months.

About 360 patients unsuitable for surgery were randomly assigned to get the new procedure or an older treatment in which doctors use a balloon to pry open the constricted aortic valve.

A year later, 69 percent of the patients who had the new procedure were still alive, versus only 49 percent who had the old procedure, called balloon valvuloplasty. Three-quarters who got the new treatment were free of cardiac symptoms, or had only mild symptoms, compared to only 42 percent of those who underwent the older therapy.

The study was sponsored by Edwards Lifesciences, which makes the collapsible valve. The device hasn't been approved by the Food and Drug Administration.

But there were significant downsides. Patients who had the new procedure were more likely to have severe strokes, and more had bleeding from the site in the leg where doctors inserted the catheter. Study authors say device engineers are working to reduce these problems.

Someday, they say, the new procedure may be an alternative for the kind of lower-risk patients who now have to have their chests opened to replace diseased aortic valves.

For an cardiologist's view, see this video featuring the University of Miami's Dr. William O'Neill, who participated in the study.