Accessibility links
Pomegranate Juice May Not Be So 'Wonderful,' Says FTC : Shots - Health News The maker of a popular pomegranate juice gets slapped by another regulator for making health claims the government says the company can't back that up. A red flag: POM claim its products are 40 percent as effective as Viagra.

Pomegranate Juice May Not Be So 'Wonderful,' Says FTC

Pomegranate Juice May Not Be So 'Wonderful,' Says FTC 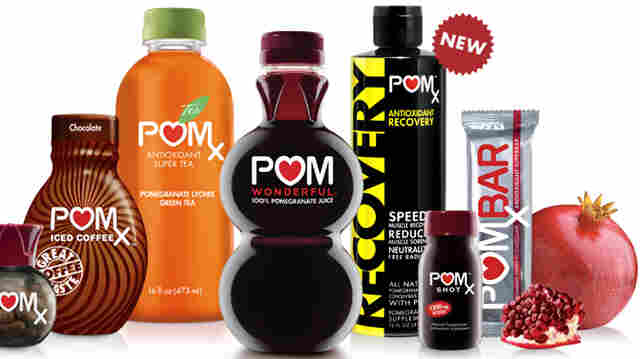 Another miracle food doesn't live up to its labeling, says the Federal Trade Commission.

This time it's charging the makers of POM Wonderful 100% Pomegranate juice and POMx supplements with making "false and unsubstantiated claims that their products will prevent or treat heart disease, prostate cancer, and erectile dysfunction."

The FTC kicked the administration's war on misleading labeling up a notch by filing the complaint against POM just six months after the Food and Drug Administration warned the makers of POM products that its claims were misleading.

Among the claims catching the eyes of the regulators were claims like "Super Health Powers" and "30 Percent Decrease In Arterial Plaque" and "Promotes Healthy Blood Vessels." The company said at the time that all statements it made were true and supported by scientific research.

The FTC, however, says, not so fast. "Contrary to POM's wonderful advertising, the available scientific information does not prove that POM Juice or POMx effectively treats or prevents these illnesses," said David Vladeck, director of the FTC's Bureau of Consumer Protection.

For example, POM claims that its products are 40 percent as effective as Viagra. We're not sure how they tested that, but the FTC complaint says the study the company relied on actually showed that the juice wasn't any more effective than a placebo.

The FTC proposes that POM get FDA approval before making any more health claims. That's not normally required in order to comply with FTC laws. (See FDA's labeling guidance here.) But in this case, says the FTC, a pre-approval would "provide clearer guidance for the company."

A hearing will be scheduled on the FTC complaint in 8 months.

POM says the FTC is "wasting taxpayer resources to persecute the pomegranate." It says it has conducted research "unprecedented among food and beverage companies" and that the commission is "acting beyond its jurisdiction, exceeding its authority, and creating a new regulatory scheme that attempts to treat our juice as a drug, which it is not."

POM, in fact, has filed a separate lawsuit against the FTC, charging that it has wrongfully raised the standard for scientific evidence in such cases.