Accessibility links
Grandma Offers Cautionary Tale On Ear Cleaning : Shots - Health News A Henry Ford Hospital ear surgeon says don't use cotton swabs to clean your ears because accidents with them can lead to deafness, paralysis and vertigo. A Michigan grandma found out the hard way.

Don't stick anything smaller than your elbow in your ear. We've all heard the warning, yet many of us still reach for the cotton swab when we feel a little plugged up. 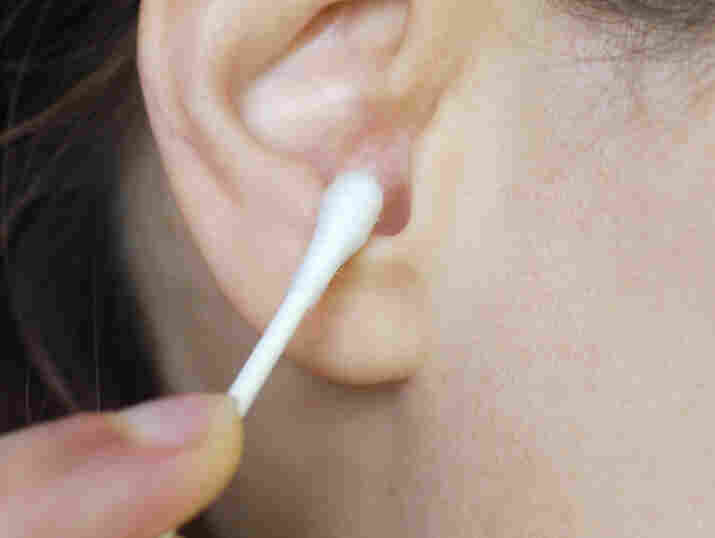 So obviously, the message is not getting through. Thousands of people each year go in for ear surgery, some of them because they've accidentally stuck the swab in too far.

One Michigan grandmother, Margaret Chessor, knows from first-hand experience how painful and debilitating it can be.

"I was just getting ready in the morning, and cleaning my ear with a Q-tip and a bee or a bug flew in front of the mirror. I went to swat it for some reason -- I  turned my head, hit the Q-tip and punctured my eardrum," she told Shots.

She said it was a "horrifying feeling" that left her with a severe case of vertigo and total hearing loss in her left ear.

Yes, vertigo is like it's depicted in the Hitchcock movie of the same name -- "like the whole room is just going to spin or tip over," she said.

She sought medical treatment a few hours later, and a few days later, found herself in surgery to fix the vertigo.

In Chessor's case, the doctors were able to repair the hole in her hear and the fistula created where the fluid from her inner ear leaked into her middle ear. And her hearing was restored as well.

But it doesn't always end so well, said Dr. Michael Seidman of Henry Ford Hospital in Detroit, who performed the surgery on Chessor and is presenting a paper on her case at the annual meeting of the American Academy of Otolaryngology -- Head and Neck Surgery Foundation today.

He told us he sees about six people a year who have put holes in their ears this way, and he performs about 2 to 4 surgeries a year to try to fix them.

"I didn't put it in that far," is something he said he hears a lot.

"In my world, two centimeters is two miles," Seidman said.

Puncturing the ear drum with a cotton swab can lead to everything from a hole in the eardrum to paralysis of the face, to deafness to vertigo.

And its all preventable.

"Ears are like the ovens that are self cleaning -- ears don't need to be cleaned," he said. Ear wax is normal and lubricates the ear canal and has antibacterial properties, Seidman said.

Occasionally people get an uncomfortable ear wax build up. Seidman recommends a mix of hot water and cool hydrogen peroxide in the ear, or covering your finger with a damp washcloth and gently cleaning the outer ear.

Or, you can see a doctor for a more dramatic removal. NPR's Joe Palca did a story a couple years back illustrating this in dramatic fashion.

So what did Chessor do with those cotton swabs?