Accessibility links
Binge Drinking: A Big Problem, Especially For The Prosperous : Shots - Health News What's a binge? Four or more drinks within a few hours for a woman and five or more for a man. The most likely to engage in extreme drinking are the well-off (household income greater than $75,000 a year) and high school kids.

Binge Drinking: A Big Problem, Especially For The Prosperous

Binge Drinking: A Big Problem, Especially For The Prosperous 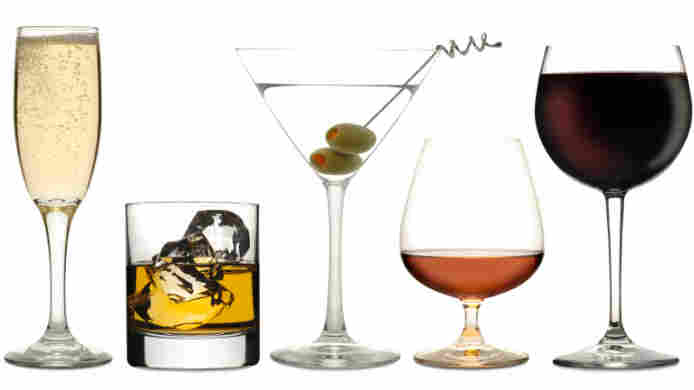 If you throw all these back at one sitting, you're a binge drinker. iStockphoto.com hide caption

Getting a serious buzz on is a serious threat to public health.

Some 15 percent of American adults went on a drinking binge in the past month, according to the latest estimates by the Centers for Disease Control and Prevention. And the most likely to engaged in extreme drinking are the well-off (household income greater than $75,000 a year) and high school kids.

What's a binge? Four or more drinks within a few hours for a woman and five or more for a man.

Now, it's probably obvious that binge drinking isn't so good for your health. In the short run drinking like that contributes to accidents and sexual transmission of disease. Keep it up, and there's liver damage and a higher risk for heart disease and stroke.

The CDC says this sort of extreme drinking is to blame for half the deaths due to excessive alcohol consumption. About 33 million Americans are binge drinkers. Most aren't alcoholics.

Among adults, young men, ages 18-34, are the biggest bingers. Whites are the ethnic group most likely to binge. And when you take a look at income, the bingeing prevalence was highest -- 19 percent -- in households making $75,000 a year. Bingeing was lowest at the other end of the income spectrum -- 12 percent for people in households making less than $25,000.

The problem, though bad, isn't a lot worse than it used to be. In 1993, the CDC says, about 14 percent of adults had gone on drinking binges. But as Dr. Thomas Frieden, head of the CDC put it, "Because binge drinking is not recognized as a problem, it has not decreased in 15 years."

Finally, the CDC's main conclusions about binge drinking come from a phone survey of more than 400,000 people conducted over landlines. A smaller, though still big, survey of nearly 16,000 people with cellphones showed an even higher rate of binge drinking -- about 21 percent.

For more on binge drinking, check out this CDC video.