Accessibility links
Rethinking The Food Pyramid: USDA Aims For 'Superior' Guide : Shots - Health News Nutritionists have criticized the U.S. Department of Agriculture's most recent food guide, MyPyramid, released in 2005. The agency says its working on a new, improved version. But don't expect to see it before next year.

After years of criticism from nutritionists, the USDA may update its five-year-old food pyramid. iStockphoto.com hide caption

We were interested to read over the weekend in the Washington Post that the demise of the Department of Agriculture's food pyramid – the government’s visual guide to healthful eating -- might be nigh.

The Post had it that the Centers for Disease Control and Prevention was considering a proposal to replace the pyramid with a model plate of food exhibiting a healthful meal. Mmmmm. 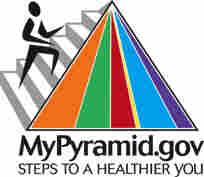 USDA is considering changes to MyPyramid, its food guide since 2005. MyPyramid.gov hide caption

But the CDC tells Shots it doesn't know anything about such a proposal, and says we're stuck with the pyramid for a while.

"The CDC can't just come up with something different on its own," said spokesman Karen Hunter. "We have to go with what the other agencies are doing."

The current pyramid, called MyPyramid, is the product of years of deliberation and revision by the USDA and its advisers. USDA has struggled to provide American consumers with simple, useful advice on what to eat. And the pyramid has evolved from a hierarchical representation (fats at the top, grains and beans at the bottom) to more confusing color scheme (blue=dairy, a sliver of yellow=oils) streaking down the graphic edifice.

Though the USDA's goals seems wholesome enough, few believe the guide has made much of a dent in the country's burgeoning obesity epidemic. Even nutritionists have struggled to understand it, according to Marion Nestle, professor of nutrition at New York University and author of Food Politics. Other public health advocates have gone so far as to call it a cataclysmic flop.

Not to fret. The USDA says a redesign of the pyramid is underway and will follow the release of the new Dietary Guidelines in December. In the next several months the agency will be soliciting input from consumers and health experts on possible improvements. Implicit is an acknowledgment that the pyramid is far from perfect.

"I believe we will have a superior product that will be embraced by the nutrition community, educators, and the public," John Webster, spokesman for the USDA Center for Nutrition Policy and Promotion, told Shots.

What might the next incarnation of the pyramid look like? Will it remain triangular or take on another, more elegant geometric form? The Food Hexagon? Webster says the agency is evaluating "whether a plate or some other image will be used to depict a nutritious diet." So the plate could have a future after all.