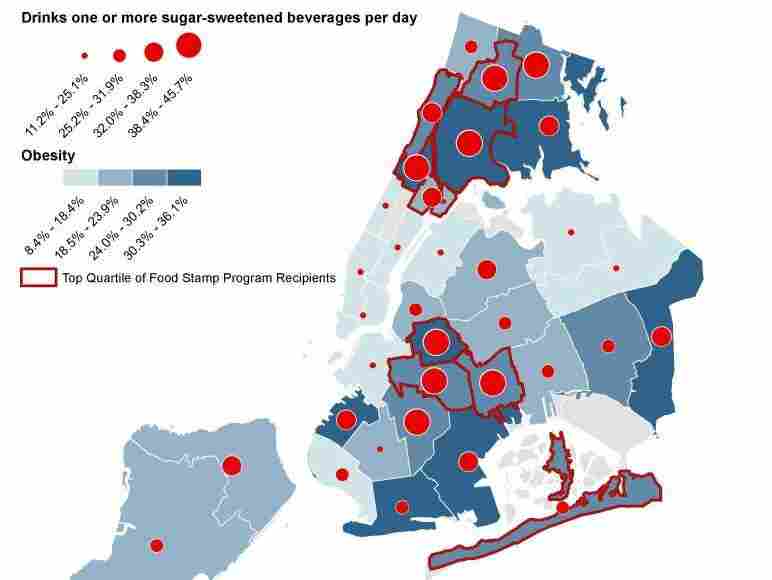 Here's where the soda drinkers are in New York City. NYC hide caption 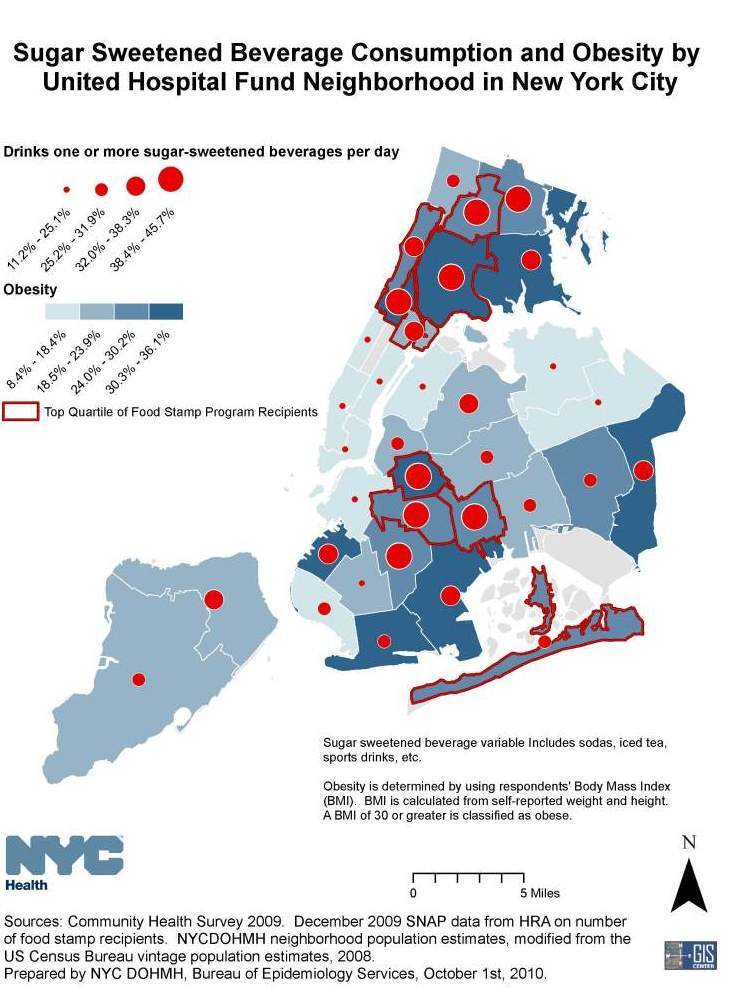 Here's where the soda drinkers are in New York City.

In all the years I lived in the Big Apple, I never thought of the place as a health spa exactly. Hot- and cold-running stress seemed more like it.

But Mayor Michael Bloomberg seems intent on shaping up New Yorkers, whether they like it or not. The latest public health push: the New York City and state health departments are asking the feds for a waiver that would let them bar the use of food stamps to buy sodas and other sugary drinks.

Eliminating subsidies for those nutritionally flawed beverages could help New York City with its weight problem, the health commissioners explain in a New York Times op-ed. Fifty-seven percent of adults and 40 percent of school kids are overweight or obese.

The ban would target drinks that have more than 10 calories per 8 ounces. But juice that doesn't have added sugar, milk and milk substitutes (even if they contain sweeteners) would be OK. Sugary drinks are a big factor in the obesity epidemic.

One knock on the ban is that it could stigmatize people who depend on food stamps, now called the Supplemental Nutrition Assistance Program, or SNAP. New York's application for a waiver anticipates that criticism and says:

[T]here are already certain items that cannot be purchased with SNAP benefits, such as alcoholic beverages and hot food products prepared for immediate consumption. ... The extension of the list of prohibited items would not create any stigma that does not already exist.

If the feds give the idea thumbs-up, it would be the first time it's been tried. A few years back, the Agriculture Department turned down a plan in Minnesota to exclude the use of food stamps to buy junk food, including soda.

At the time, the feds said the proposal would run afoul of the program's definition of food and would sow "confusion and embarrassment" in stores, the Associated Press reported.

Nutrition guru, New Yorker and food blogger Marion Nestle wrote, "I am, as readers of this blog well know, no fan of sodas. If people want to do something about controlling body weight, the best place to begin is by cutting out sodas.  Soft drinks contain sugars and, therefore, calories, but nothing else."

Still, she says if it were up to her, she'd prefer a carrot to a stick. Why not make food stamps "worth twice as much when spent for fresh (or single-ingredient frozen) fruits and vegetables" rather than banning sodas?