Accessibility links
Salt, Calories And Info On Key Fats Belong On Front Of Foods : Shots - Health News The Institute of Medicine left sugar off its list of top nutrients that should be included in the information on the front of food boxes and cans. It says there's no scientific agreement about how added sugar impacts health.

Salt, Calories And Info On Key Fats Belong On Front Of Foods

Salt, Calories And Info On Key Fats Belong On Front Of Foods

Ever bought cereal or snacks just because it says "high in fiber" or "low carb" on the front of the package? We admit it. We have. 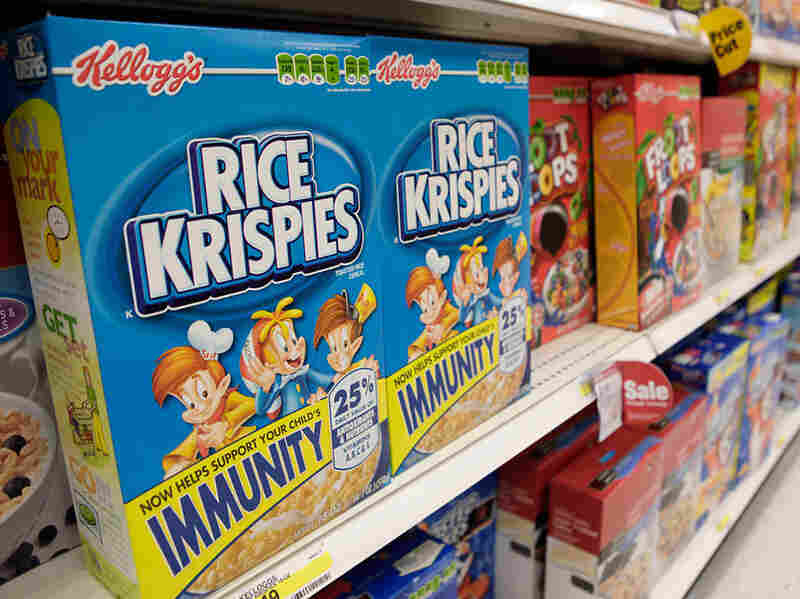 What's important for consumers to know about food at a glance? Paul Sanceya/AP hide caption

That's not necessarily so bad. But what's most important, says a report released by the Institute of Medicine today, is getting the skinny on four things: calories, saturated fat, trans fat and sodium.

That's because we consume way too much of those, and our overdoing it is strongly linked to diabetes and heart disease, the report says.

Well, the IOM says information about sugar, total fat, cholesterol, carbs, and vitamins and minerals other than sodium aren't quite as important to health. Some of this kind of information can already be found on the back of the package labeling, in the standard nutrition label on the backs of food packages.

But noted nutrition expert Marion Nestle picks a bone with the report on its treatment of sugar  -- particularly sugar added to foods. "I think consumers want to know about added sugars in food products," she says in a blog post. "I certainly do."

And the advocates over at the Center for Science in the Public Interest agree, saying sugar belongs on the front labels of at least some foods. "Unfortunately, without disclosing the amount of added sugars, a soft drink ...would look pretty good because it has no fat and virtually no sodium," CSPI Executive Director Michael F. Jacobson said in a statement.

Despite reports that sugar might be bad for your heart and New York City Mayor Bloomberg wants to ban purchases of sugary drinks with food stamps, the sugar industry hasn't shied away from fighting limits in the past.

The Institute says it didn't count added sugar on its top four list because:

Despite the overall increase in calories that they provide to the American diet, at this time evidence and agreement are lacking about adverse health effects of added sugars, the exceptions being the extra calories that they contribute to a diet and their dilution of
essential nutrient intake.

For the report, the IOM studied more than 20 different labeling systems developed by the food industry in the last several years -- information designed to help consumers make healthier food choices but also buy their products.

The Food and Drug Administration has stepped up enforcement in the last year on labeling claims is considering standardizing nutritional information on the front-of-package label.

The agency is asking food companies for advice on the issue, much as it did in the 1990s when it developed the Nutrition Facts label for the back of food packages.

The institute will issue a second report on how well consumers understand and use front-of-the-label information next.