Accessibility links
Blowing The Whistle On 'Brazilian Blowout' Hair Straightener : Shots - Health News Canada and Oregon have banned Brazilian Blowout after finding unacceptable levels of formaldehyde in the product. But the hair straightener's manufacturer says the product is 100 percent safe. 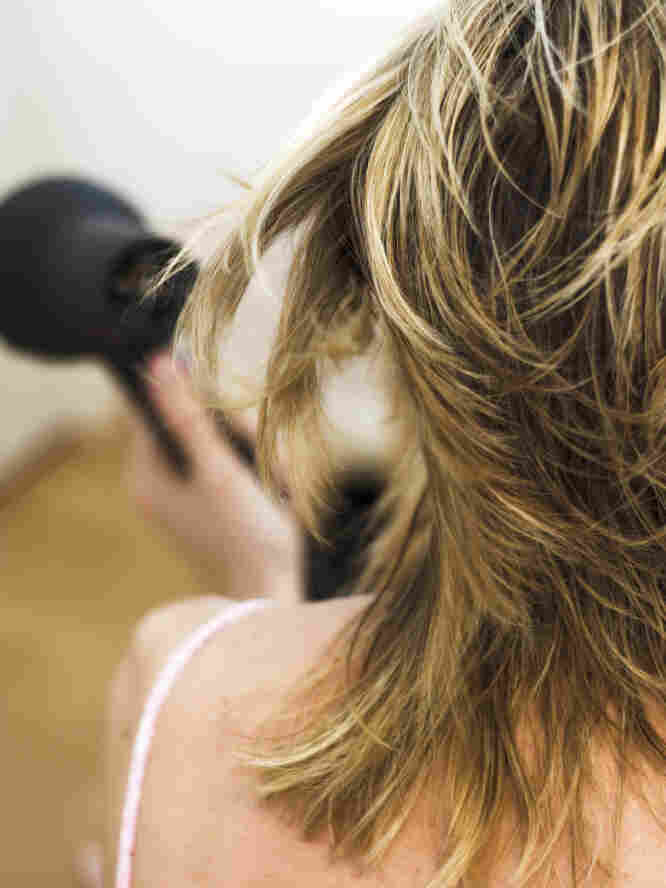 Questions about a chemical straightener may mean blowdrying hair is a safer way to go. Harvey Fitzhugh/iStockphoto.com hide caption

A hot new hair product which promises to turn frizzy locks silky and smooth may be making some people sick.

An Oregon hair stylist has prompted an investigation into Brazilian Blowout. Available only in salons, this hair smoothing treatment tames your tresses for about $250 a pop.

Molly Scrutton works at Platform Artistic Salon in Portland, Oregon. She gave the treatment to about 20 clients before she started to feel ill herself. She told the Oregonian her throat hurt, her chest ached and she started to wonder if the new hair product she was using was the culprit.

Scrutton started investigating and discovered that other beauticians who suffered similar symptoms had been exposed to dangerous levels of formaldehyde; a chemical the National Cancer Institute calls a cancer-causing substance. (Insert your own bad high school biology class memories of dissecting frogs preserved in the stuff here.)

Brazilian Blowout claimed to be formaldehyde free, but Scrutton was suspicious. She contacted the Oregon Health & Science University's Center for Research on Occupational and Environmental Toxicology.

They tested samples of Brazilian Blowout from the Portland salon and found formaldehyde levels between 8.85 percent and 10.6 percent -- far higher than the 0.2 percent considered safe by the Cosmetic Ingredient Review Panel.

Brazilian Blowout of California, the product's maker, claims the hair straightener is 100 percent safe. They commissioned their own study which says formaldehyde levels in Brazilian Blowout are far below what's considered acceptable.

Oregon is sticking to its own studies and is warning salon workers to use the product with caution. The Canadian Government has gone further. Its health agency is warning stylists and consumers not to use Brazilian Blowout.

The FDA has also received complaints and says it will monitor the issue.

In the meantime, using a hair dryer and flat iron to tame your mane may be the safer bet.