Accessibility links
Hormone Replacement Therapy Raises Risk Of Death From Breast Cancer : Shots - Health News New information on the increased risk of dying of breast cancer for women taking hormone replacement therapy has women and their doctors once again re-evaluating whether taking a popular drug is worth the risk. 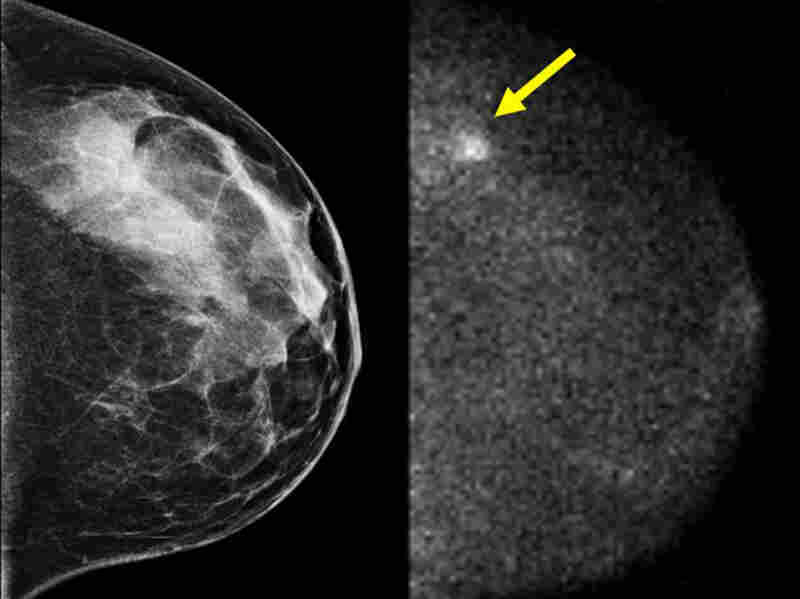 There's another round of bad news today for hormone replacement therapy (HRT).

Women taking a popular drug to alleviate post-menopausal symptoms increase their risk of dying from breast cancer, according to new results from a major government study.

On top of news in recent years that HRT doesn't protect against heart disease and that it increases the risk of breast and lung cancer, more women and their doctors will be taking a long hard look at this today.

It's been eight years since the big study called the Women's Health Initiative knocked the props out from under one of the biggest drug pitches of all time – that HRT could allow women undergoing menopause to hold onto their youth, and prevent ills such as heart disease.

The first results from the WHI, back in 2002, showed hormone replacement doesn't prevent heart disease. And it does raise the risk of breast cancer.

But only now can the WHI answer one of the big questions about hormone replacement therapy: Does it cause more women to die from breast cancer? And that answer is yes.

The latest study out of the WHI says women who took a popular combination of estrogen and progestin called PremPro may have twice the risk of dying from breast cancer as women who took a placebo. The report appears in the Journal of the American Medical Association.

The new study – an 11-year followup of about 13,000 WHI participants – confirms that hormone replacement raises the risk of breast cancer.

Many experts had hoped that the kind of breast cancers caused by hormone replacement would be less aggressive and more curable.

"This really is a paradigm shift. There was a whole group of people, including myself, who had been thinking hormone use was associated with an increased detection of breast cancer but not necessarily an increase risk of death from breast cancer. But this really nails it," he said.

According to the report, the breast cancers diagnosed among those on hormone replacement were more likely to be advanced at the time of diagnosis than those among women on a placebo. This partly because estrogen supplements make breast tumors harder to diagnose.

A note of caution, though: The increased risk of death from breast cancer is small. For every 10,000 women, about three die of breast cancer among hormone replacement recipients versus about two among those who didn't take the supplements, the study shows.

But when you multiply this among the millions of women who once took hormone replacements – six million at the peak – the impact is sobering.

After the first results of the Women's Health Initiative came out in 2002, about half of the women being followed stopped taking hormone replacement therapy – and the nation's breast cancer rate fell sharply.

Some experts think deaths from breast cancer will decline in the next few years as a result of these women abandoning hormone replacement.

But millions of women still take hormones for the bothersome hot flashes and sleepless nights of menopause. Sales of Prempro still total $1 billion a year.

Pfizer, which makes the drug, says the company stands behind Prempro's current labeling, which advises the lowest effective dose for the shortest period of time. Regarding the risk, the statement reads, in part:

“... hormone therapy is among the most thoroughly studied medicines and the increased risk of breast cancer compared to placebo has been included in Prempro’s label since its introduction in 1995. This analysis does not alter that risk, nor does it dispute hormone therapy’s effectiveness. FDA describes hormone therapy as ‘the most effective FDA approved medicine for relief of hot flashes [and] night sweats.’"

But in the wake of the new HRT report, some experts wonder if there's any way to tell what a safe course of hormone replacement is.

One of the authors of the new study, Dr. JoAnn E. Manson, a professor of medicine at Harvard Medical School and Brigham and Women’s Hospital, said women should not take the hormones unless they really need them.

“The data suggest it is cumulative long-term use,” Dr. Manson said. “Women should avoid long-term use. I think that’s the bottom line,” she told The New York Times.

But Dr. Peter Bach of Memorial Sloan-Kettering Cancer Center says there are no studies to support the safety of short-course hormone replacement. In a JAMA editorial, Bach says it's all well and good to tell women to talk it over with their doctors.

"But the reality is that informed decisions are not valid," Bach writes, "when the information underlying the decision is itself speculative."

Meanwhile, more than 9,000 lawsuits have been filed against the company by women who claim the drugs caused breast cancer. Recently, the Supreme Court declined to take up an appeal by the company, leaving the matter up to state courts.