Accessibility links
Quake Not To Blame For Haiti Cholera Outbreak : Shots - Health News The most likely explanation for the outbreak is a rise in temperature and salinity in estuaries around Haiti's Bay of Saint-Marc, says an expert. Shrimp-like copepods that carry the cholera bacterium thrive in those conditions. 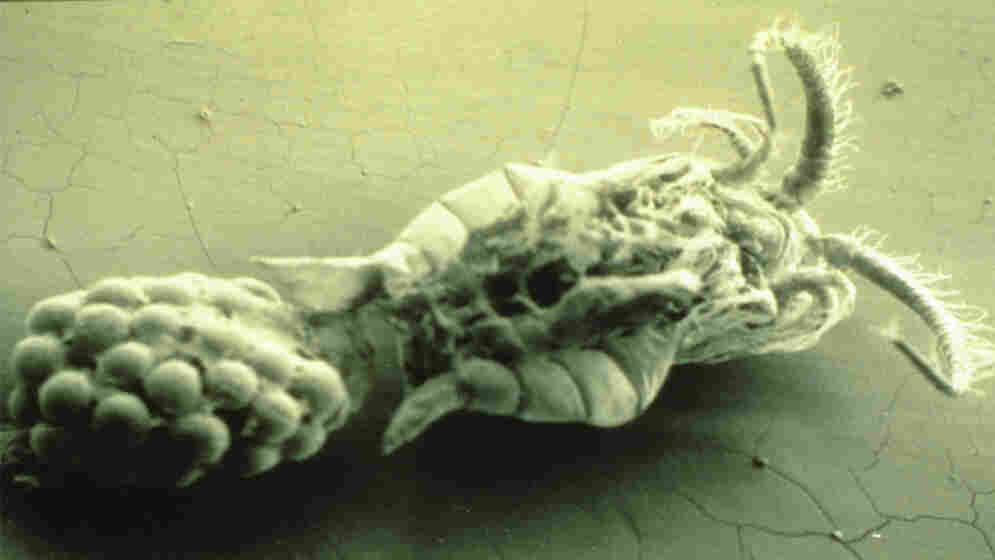 A closeup of Eurytemora, a kind of copepod that serves as a reservoir for the cholera bacterium. Courtesy of Dr. Rita Colwell, University of Maryland hide caption 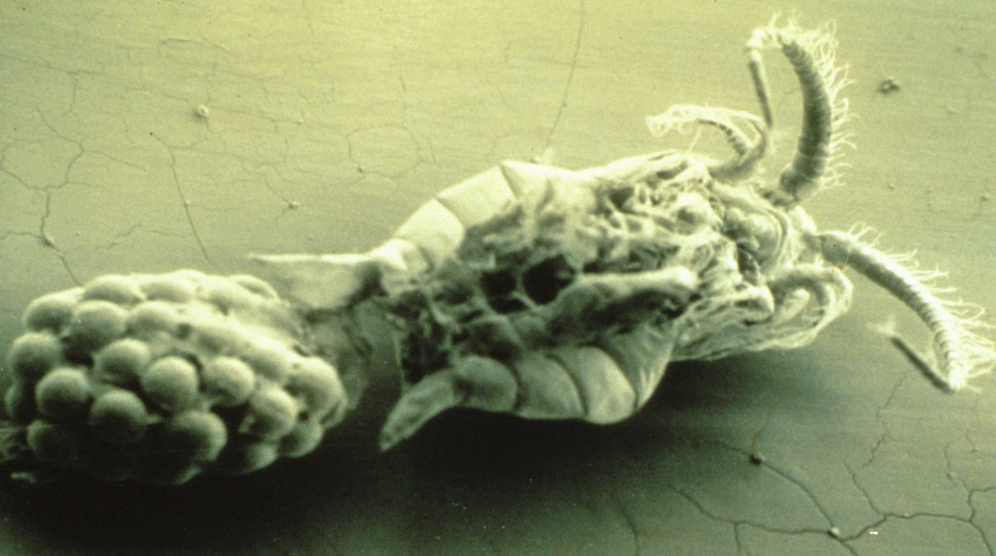 A closeup of Eurytemora, a kind of copepod that serves as a reservoir for the cholera bacterium.

Cholera plagues poor countries with bad sanitation. But that fits Haiti before and after last January's devastating earthquake. So why did the disease only pop up now?

There may not be immediate answers. But there are some intriguing hints.

Available evidence suggests the earthquake has nothing to do with cholera's sudden appearance in Haiti -- although the big shake will have a lot to do with how earthquake-devastated Port-au-Prince copes with cholera when and if the outbreak gets there.

Scientists have been mystified for years about cholera's long absence from the Caribbean. Most of Central and South America saw outbreaks after the disease struck Peru 19 years ago, sickening an estimated 500,000 people and killing around 3,500.

In the aftermath, Andrus says, "we received reports (of cholera outbreaks) from New York City and Montreal and up and down the Western Hemisphere. But interestingly, it never reached Hispaniola." That's the island Haiti shares with the Dominican Republic.

So cholera-watchers were startled when cholera suddenly appeared this month in Haiti. "Cholera is one of those diseases that keep surprising us," says Dr. David Sack of the Bloomberg School of Public Health at Johns Hopkins.

Sack remembers when Venezuela was suffering from a post-Peru cholera outbreak in 1991, "but it didn't make it across the 10 miles of water to Trinidad-Tobago. So I thought if it didn't happen then, it would be unlikely to occur later."

The most likely explanation, Sack thinks, is a rise in temperature and salinity in the river estuaries around the Bay of Saint-Marc in the Artibonite Department of Haiti. That area, 70 miles or so northwest of Port-au-Prince, is the epicenter of the current cholera outbreak.

"Cholera is an environmental bacterium," Sack says. "It can persist in the environment for many, many years without any human infections."

The Vibrio cholerae bacterium shrinks into a dormant, spore-like state, waiting for favorable conditions -- a warming of water temperatures, an increase in salinity, and particularly an algae bloom that can result from these environmental changes.

Plentiful algae amplify the population of a tiny shrimp-like creature called a copepod -- in particular, a kind called Eurytemora.

The University of Maryland's Dr. Rita Colwell (and a former director of the National Science Foundation) has shown that cholera bacteria like to hitch a ride on these tiny crustaceans and to colonize their intestines.

A cholera outbreak occurs when people ingest infected copepods. It spreads when feces from infected humans (most of them without cholera symptoms) gets into drinking water.

The link between water temperature, salinity, algae and copepods  explains why cholera outbreaks peak and fall with seasonal cycles in areas such as Bangladesh.

Scientists will undoubtedly try to puzzle out just what environmental disturbances unleashed cholera in Haiti. Whatever the particulars, the larger lesson is that cholera is "an organism that can never be eradicated but only controlled," as Colwell puts it.

That's why scientists say Haiti will probably have to deal with cholera for years to come.