Accessibility links
Chaos In Haiti As Cholera Patients Seek Treatment : Shots - Health News An emergency treatment center being built to relieve the pressure on a key hospital in the cholera epidemic was burned down, reportedly by people upset that it was too close to a school. Cholera cases are slowing, yet the scene remains chaotic. 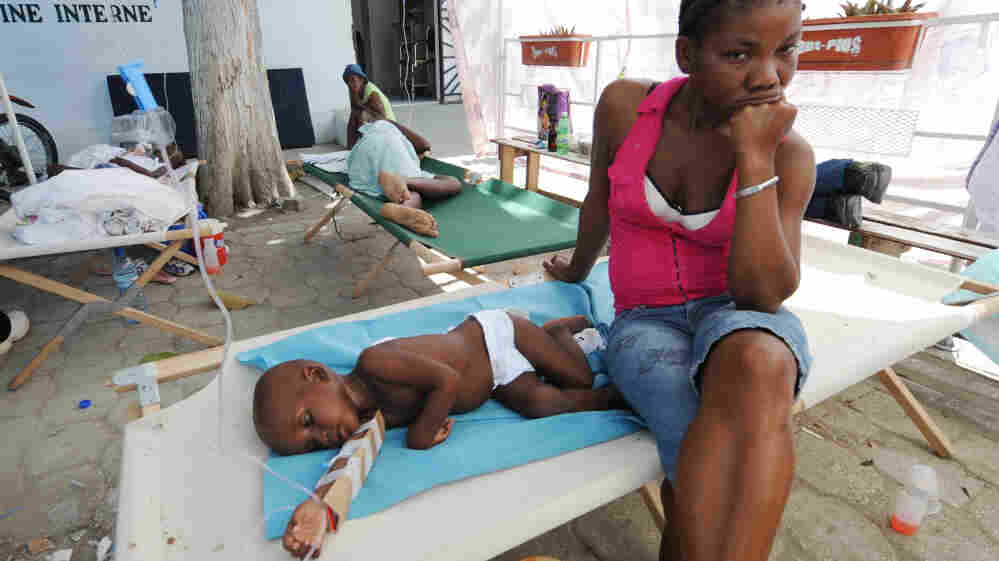 Sick cholera victims and families wait at St. Nicolas Hospital in Saint-Marc, north of Port-au-Prince. Saint-Marc residents burned down nearby tents Wednesday that were supposed to relieve pressure on the hospital. Thony Belizaire/AFP/Getty Images hide caption

Residents in the town of Saint-Marc yesterday burned down part of a cholera treatment center under construction, NPR's Christopher Joyce reports this afternoon from Haiti.

People were reportedly upset that the tent clinic was being built too close to a school.

The center was being built to relieve some of the intense pressure being put on St. Nicolas Hospital, which has treated the majority of patients affected by cholera in the current epidemic.  According to Doctors Without Borders, the treatment center would have had room for 400 patients.

But according to the group and what Joyce is hearing, the Ministry of Health has abandoned plans to construct the treatment center on that site.

Meanwhile, Joyce reports for All Things Considered Wednesday on the scene inside the hospital compound.

Doctors there say the number of cases has slowed but people are still coming in for treatment of the severe dehydration that results from diarrhea. If caught in time, most people can recover from cholera, but the situation at the hospital in Saint-Marc is "chaotic," Joyce tells ATC host Melissa Block.