Accessibility links
Cholera Vaccine Isn't The Answer For Haiti : Shots - Health News Vaccines can give up to 90 percent protection against cholera – at least in the short term. But don't expect them to get widespread use in Haiti to contain the current cholera epidemic. 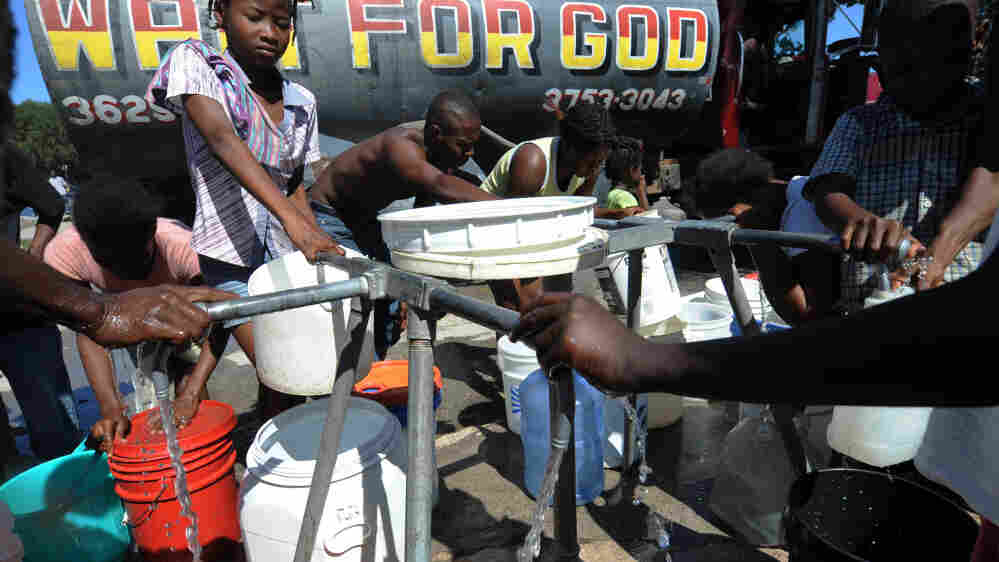 People distribute potable water near a tent city in Port-au-Prince. Officials say a vaccine would do little to prevent more cases of cholera there. Thony Belizaire/AFP hide caption

There are two vaccines that give up to 90 percent protection against cholera – at least in the short term. But don't expect them to get widespread use to contain Haiti's current cholera epidemic.

Dr. Jon Andrus is deputy director of the Pan American Health Organization and a vaccination specialist. He explained why cholera vaccine isn't the answer to Haiti's problem at a Wednesday teleconference.

NPR asked Andrus if the vaccine might be useful in targeted populations in advance of new outbreak in Port-au-Prince. Such a "ring vaccination" strategy was critical in eradicating smallpox.

Andrus explained that ring vaccination worked in smallpox because everyone who was infected had symptoms. So when a new case or a small cluster popped up, it meant other people without symptoms were not yet infected and were still eligible for a vaccine.

But with cholera, by the time the disease shows up, 80 percent of people are carrying it -- but without any symptoms.

"The horse is out of the barn," Andrus says, "so you can't determine with any accuracy where that bacterium is circulating...You already have transmission outside your ring."

There are other reasons why cholera vaccination isn't recommended during an outbreak. It requires two doses in most people, and three in young children. Keeping track of who's been vaccinated and getting them back for a second and third dose presents enormous logistical problems and a lot of personnel. And even with all that effort, it still takes three weeks at the least for immunity to build in the body, Andrus says.

The effort to mount a crash vaccination campaign would also surely detract from other public health measures known to be effective, like educating people about hand-washing and handing out safe water, soap and oral rehydration. Such measures prevent infections and reduce fatality rates to around 1 percent.

"Measures to prevent and treat this disease are so effective…that we don't vaccinate our own staff on the ground or staff we're sending there," Andrus says.

Having said all that, though, Andrus says PAHO is discussing whether to vaccinate some populations beyond the current reach of the outbreak.

But one big problem is the supply of cholera vaccine. There may be only 200,000 or so doses of Dukoral, the only vaccine that's been approved by WHO as safe. PAHO is trying to find out if the other vaccine, Shanchol, is available in bigger quantities. (It's expected to get the green light from WHO, but it's not clear when.)

So there may be an argument for using one or both vaccines in some Haitians in the path of cholera. PAHO and Haitian authorities will need to make that decision soon.