Accessibility links
FDA Questions Diet Pill In Latest Setback For Weight-Loss Medicines : Shots - Health News The Food and Drug Administration has a lot of questions about Qnexa, an experimental diet pill. Are the risks worth a modest improvement in weight loss? That remains the big bugaboo for the field of weight-loss medicines. 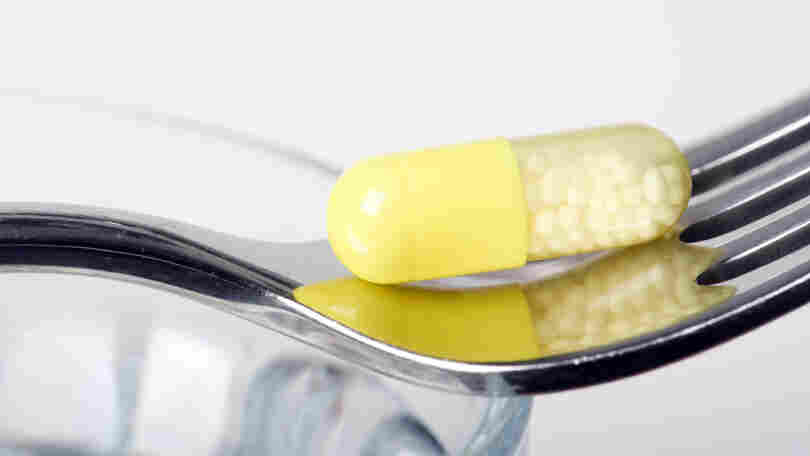 The menu may not have a new diet medicine anytime soon. iStockphoto.com hide caption

Here's a little piece of friendly advice. If you're waiting around for a diet pill to solve your weight problem, forget about it.

The upshot is the agency isn't going to approve Qnexa for a long time, if ever.

Even though the decision was expected because a panel of outside advisers gave the drug a thumbs-down in July, it's still a blow to the company and to the efforts, more broadly, to bring medicines to bear in the country's fight against obesity.

So what were the FDA's beefs with Qnexa? The letter wasn't released, but Vivus said in a statement the agency wants more info about how the company would mitigate the risks of birth defects for the babies of women of child-bearing age and some more data about heart risks.

The agency's questions don't appear insurmountable, in the view of some optimists. Shares in Vivus jumped by almost a third when the market opened Friday.

Some old ingredients may help Qnexa prevail. The once-a-day pill is a combination of phentermine, a stimulant and appetite suppressant, and topiramate, sold mainly to help control epilepsy seizures. While those drugs have risks, the side effects are pretty well understood at this point.

But are the risks worth the modest improvement in weight loss? That remains the big bugaboo for the field. It's been tough for the makers of medicines to show they can help people lose just 5 percent of their weight.

Even if they make it over that bar, as Qnexa did, there's the checkered history of diet drugs, including most recently Meridia, which is being withdrawn.

Given the obesity epidemic in this country, millions of Americans might turn to a new diet pill for help. So even rare side effects could end up causing problems for a lot of people.

That's one reason not to expect FDA — or doctors — to embrace any of the medicines anytime soon.