Accessibility links
Fish Oil Pills No Help For Alzheimer's Patients : Shots - Health News A clinical test of fish oil supplements found they didn't slow the progression of Alzheimer's disease. The findings deflate optimism about the approach, which seemed to hold some promise. 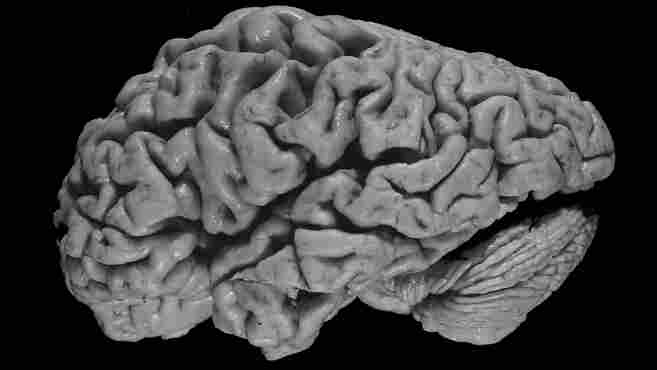 Fish oil supplements are all the rage, touted as a kind of 21st century wonder pill.

Older men and women swallow them because research suggests they may help them avoid heart disease. Pregnant women swallow them in the hope that the supplements might give their babies a cognitive boost, though that's far from certain.

A reason the supplements are thought to be helpful is they contain a particula omega-3 fatty acid called DHA.

But a study just out in the journal JAMA finds DHA won't stop the progression of Alzheimer's in people who already have a mild or moderate case of the disease.

Researchers at the Oregon Health and Science University decided to give supplements to patients with mild to moderate Alzheimer's because of some evidence that showed a diet high in DHA lowers the risk of Alzheimer's.

They gave supplements or placebos to almost 300 patients with Alzheimers for 18 months, then scanned their brains for shrinkage. They also gave them standard cognitive tests.

Maybe a supplement rich in DHA, they theorized, would slow the progression of the disease.

Alas, it wasn't to be. There was no difference in the rate of cognitive change on a test called the Alzheimer's Disease Assessment Scale or any of the other tests the patients were subjected to.

In other words, no real difference between the people on the DHA and the people on placebo. That left the wonder pills looking a little less wonderful today.