Accessibility links
Colleges Restrict Four Loko, As Health Concerns Rise : Shots - Health News After problems at a concert on campus, the University of Rhode Island becomes the latest school to warn about or restrict access to the beverages that combine the punch of alcohol with the stimulating effects of caffeine. 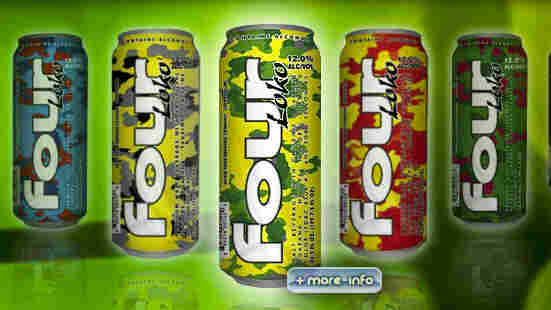 Four Loko is a no-go at the University of Rhode Island. Four Loko hide caption

With the move, the University of Rhode Island becomes the latest school to warn about or restrict access to the beverages that combine the punch of alcohol with the stimulating effects of caffeine.

At a concert on the URI campus last month, more than 30 people were treated for illnesses or injuries related to alcohol, the Providence Journal reports. No alcohol was available at the arena, but students apparently got hammered ahead of time.

URI's Dan Graney told the paper the students call it "pre-gaming or front-loading." Four Loko, and other drinks like it, are inexpensive and potent. They pose a real "danger," according to Graney.

Last month, dozens of students at Central Washington University were sickened and nine wound up in the hospital after drinking Four Loko. Phusion Projects, maker of the beverage, said the incident was "inexcusable" but also said its product wasn't solely to blame.

All the warnings about the drinks may be boomeranging. The student paper at Kansas State University reports that sales of caffeinated alcoholic drinks are up at liquor stores near campus.

"Some customers have seen (the drink) on the news and see it in the store and then want to buy it to try it," one liquor store employee told the paper.

People have safely combined caffeine and alcohol for years: rum and colas, Red Bull and vodkas and Irish coffees are standard fare in bars and restaurants everywhere.