Accessibility links
Can Electric Shocks To The Brain Improve Math Skills? : Shots - Health News Electrical stimulation to the brain can help a person’s mathematical abilities for up to six months, according to a new study.

Can Electric Shocks To The Brain Improve Math Skills?

Can Electric Shocks To The Brain Improve Math Skills?

I was never good at math. Growing up, calculus might as well have been nuclear physics as far as I was concerned. It was all just one long nightmare. 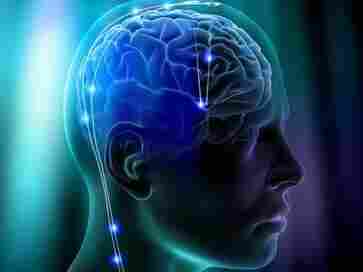 Which is why an article titled "Electrical Brain Stimulation Improves Math Skills,"  published in this week's Current Biology, caught my eye.  Finally, I thought, hope for the mathematically challenged. Hope for people like me.

In an experiment, researchers from Oxford University used a non-invasive brain stimulation technique called transcranial direct current stimulation, or TDCS, with 15 test subjects for twenty minutes a day over a six-day period.

Basically, the scientists ran a mild electrical current across the skull of the volunteers focusing on the parietal lobes, the part of brain that matters most for numerical understanding. They also had a placebo group that didn't get the electrical current in the right place.

With the current running, they taught the volunteers a system of numbers the scientists had invented. Later, they gave the research subjects tests to see how well they were able to absorb the information.

What they found was that the brain stimulation improved participants' ability to learn the new numbers. The placebo group did significantly worse that the test subjects that had the correct placement of the electrical current. Also, six months later the volunteers who'd received the treatment still performed well.

Juicing your brain won't turn you into Albert Einstein, the authors of the study write. And it was a very small experiment. But if more and bigger studies produced the same results, the technique might be helpful to the 20 percent of the population that has moderate to severe numerical disabilities, called dyscalculia.

Should you try this at home? Bad idea. "We are not advising people to go around giving themselves electric shocks, but we are extremely excited by the potential of our findings," said Dr. Cohen Kadosh, a study's lead author.

And will the electric current spell the death knell for math tutors in the immediate future? It's doubtful.

Daniel Ansari, a neuroscientist at the University of Western Ontario in Canada, told National Geographic News he doesn't expect the treatment to be available anytime soon. And, he said, "It doesn't necessarily show that it improves school-relevant learning skills" such as arithmetic.