Accessibility links
When Disabled Child Turns 21, Parents Face New Care Challenge : Shots - Health News The state of Illinois says Olivia Welter, who is severely disabled and turns 21 on Nov. 9, now belongs in an adult program or a nursing home. Her parents are suing to keep caring for her at home.

Families Fight To Care For Disabled Kids At Home

Families Fight To Care For Disabled Kids At Home 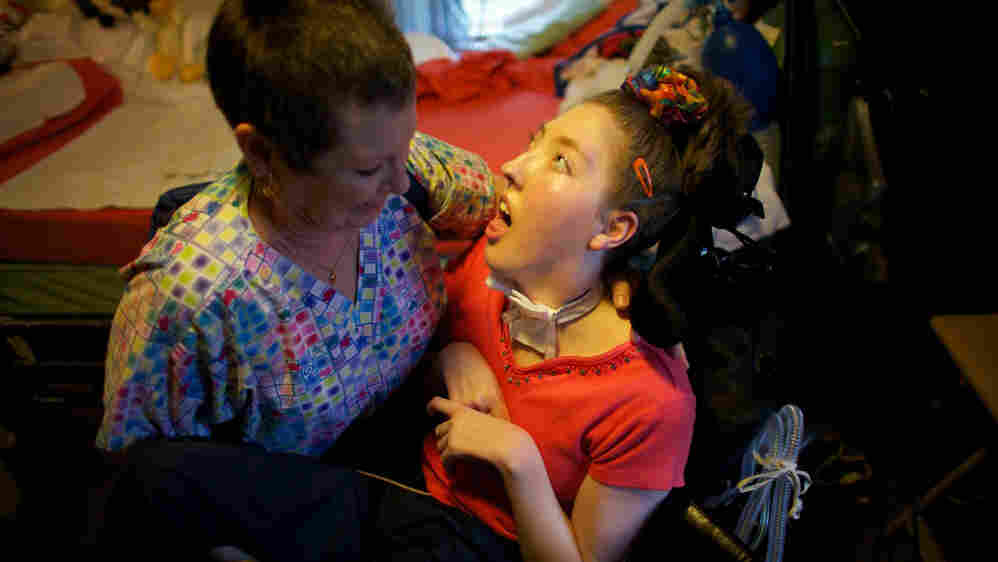 I've met many caregivers in my reporting over the past 25 years. I've rarely seen parents do as much for a child as what Tamara and John Welter do for their daughter Olivia, who was born with multiple disabilities.

“You do what you have to do for your child,” Tamara Welter says. She and her husband have provided the care that keeps Olivia at home — healthy and a central part of their family — thanks to their own sacrifice and to the funding provided by what’s been a generous state program.

But once Olivia turns 21 tomorrow, she's considered an adult, and she'll no longer qualify for the state program for children that has funded her care and her nurses.

Instead, the state says she now belongs in an adult program that will provide less than half the funding she gets now. Or it will pay the entire cost to send Olivia to a nursing home.

The Welters doubt their daughter would get the same level of care in a nursing home. And recent horror stories of neglect, like this one and this one in the Chicago Tribune, suggest they're right to be concerned.

So they're suing the state of Illinois, asking that their daughter continue to receive the same level of care.

Olivia needs a ventilator to breathe, 24-hours a day. She is fed--and gets her medicines--through another tube. A few times every hour, a nurse or her parents use another tube to suction the mucus from her mouth and lungs.

Until ten days ago, the Welters worried that Olvia's nurses would walk out the door tonight. But the state agreed to maintain the funding while the family's case goes through the courts. So for now, Olivia and her parents are in limbo. It may last a few months or several months.

If they lose, Tamara Welter says she'll become a full-time caregiver to keep Olivia at home. That means she'll quit her part-time job as a cashier at the Cracker Barrel. She took it to help pay for her son's college education. (Brian is out of school now and a teacher nearby. He also helps care for his sister.)

Still, caring for Olivia is hard work. John Welter says he, also, might need to quit his job. He's a professor of history and religion at Lincoln College. But then he'd then lose the health insurance that pays for parts of Olivia's care that the state doesn't pick up.

There are several trends in health care that are clashing here. First, until recently, children like Olivia rarely lived to see adulthood. Better medical technology has kept Olivia alive. But also the attentive, loving and constant care she gets in her own home.

Nurses, paid for by the state, work sixteen hours a day and are doing some treatment for the young woman multiple times in an hour. Her parents take over for the other 8 hours.

Olivia's been hospitalized just twice in the last seven years. She's had just one bedsore her entire life and that was a dozen years ago. Dr. Adalberto Torres, Olivia's physician at Children's Hospital of Illinois in Peoria, says that's the sign of exceptional care. "They've kept her happy and healthy," he says. "And one thing you can see with Olivia is when she is sad or happy."

But as more children live longer needing complex medical care, there's another trend at play. States are cutting--not expanding--the programs that pay for them.

At the start of the current fiscal year, "states were still suffering from the effects of the worst economic downturn since the Great Depression," notes the Kaiser Commission on Medicaid and the Uninsured.  According to the Center on Budget and Policy Priorities, 46 states faced budget shortfalls this year and the total state debt will hit $140 billion in the current fiscal year.

As a result of the recession, more people enrolled in Medicaid programs last year and the year before. According to Kaiser, enrollment grew by 8.5 percent in fiscal year 2010. The federal government helped out by increasing its share of Medicaid--a state and federally funded health insurance program for the needy.

But much of that extra money came from the stimulus package and that will end at the end of this year.

Tune into All Things Considered tonight for more on Olivia and others like her.