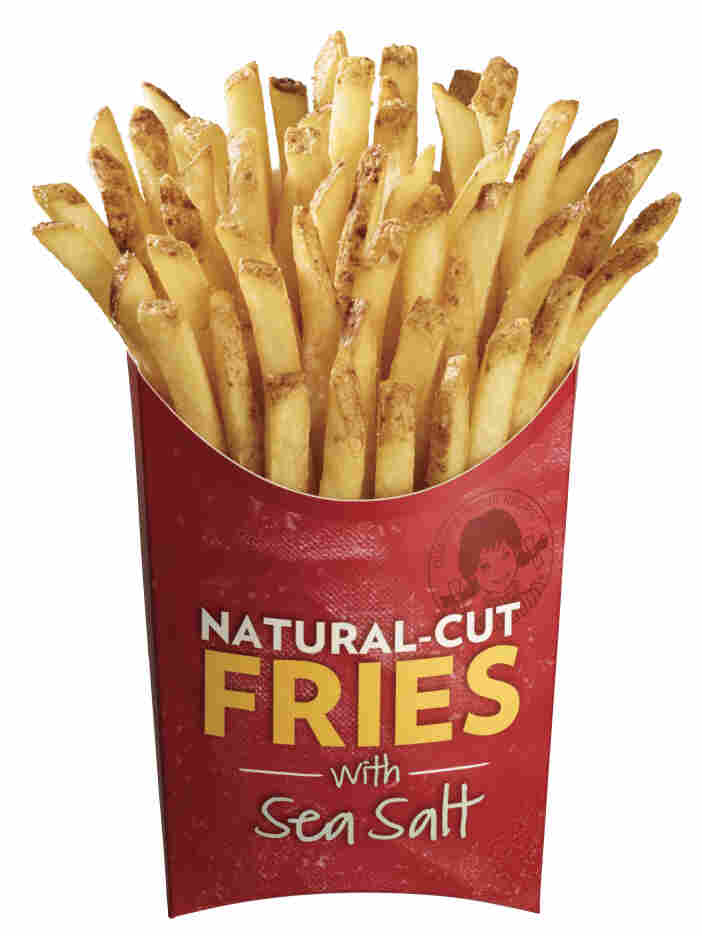 Now Wendy's, whose also-ran fries lag behind McDonald's for flavor, is trying a sprinkle of sea salt to liven things up.

But the taste upgrade comes at a health cost. The fast-food chain's new fries actually have a lot more sodium than the old ones. That's despite the fact sea salt sold in this country typically has larger grains than regular table salt and can deliver more flavor with less shaking.

Wendy's new fries are called "natural-cut fries with sea salt." According to a company announcement, today marks the launch of the first redesign of its fries in 41 years.

But the sodium amounts ought to set off a few alarms for the millions of us who already go overboard on the salt. Wendy's confirmed to us that the new medium sized fry goes from 350 milligrams to 500 milligrams. Young, healthy people shouldn't be putting more than about 1 teaspoon of salt, or 2,300 milligrams of sodium, into their bodies each day, the CDC reminds us.

But let's be real. Nobody we know is walking into a fast-food joint looking for health food. And the differences between sea salt and America table salt (rock salt) are minor.

"Basically this is all marketing," Mark Kurlansky, author of Salt: A World History, tells Shots in an e-mail. "Sea sounds a lot better than rock [salt]. But if the product is pure, it is the same," he says.

Wendy's is clearly aiming for taste and coolness here. The chain has launched a Facebook campaign to promote the new fry today, calling it "Fry For All."

"Wendy's has never had the best french fry," marketing chief Ken Calwell admits to USA Today. "If it's not your strength, you can start with a clean sheet."

The new fries are supposed to be better tasting because they leave a bit of the skin on and, of course, have a sexier salt.

Ocala, Fla., food blogger Rick Allen, who tasted the fries back in August when they popped up in the state, gives them an enthusiastic thumbs-up: "These fries are very much like Mom used to make; or better yet, like they used to make and sell at the county fair!"

But as more products feature sea salt, is the trend about to wash up?

Lynn Dornblaser, new products guru at Mintel, tells USA Today. "Sea salt has the potential to grow as fast as low-carb did.... Hopefully, it won't decline as fast."

UPDATE: A Wendy's spokesman confirmed that the sea salt granules the company uses for the new product are larger than table salt. "Although less sea salt is needed, we used an independent lab for testing and found the sodium level increases," he said.