Accessibility links
Dengue Vaccine Hunt Heats Up With Big Human Test : Shots - Health News Drug giant Sanofi-Aventis is moving ahead with a big clinical test of a vaccine that could protect people against the four main types of dengue fever. The results, if positive, could pave the way for regulatory approval in a few years. 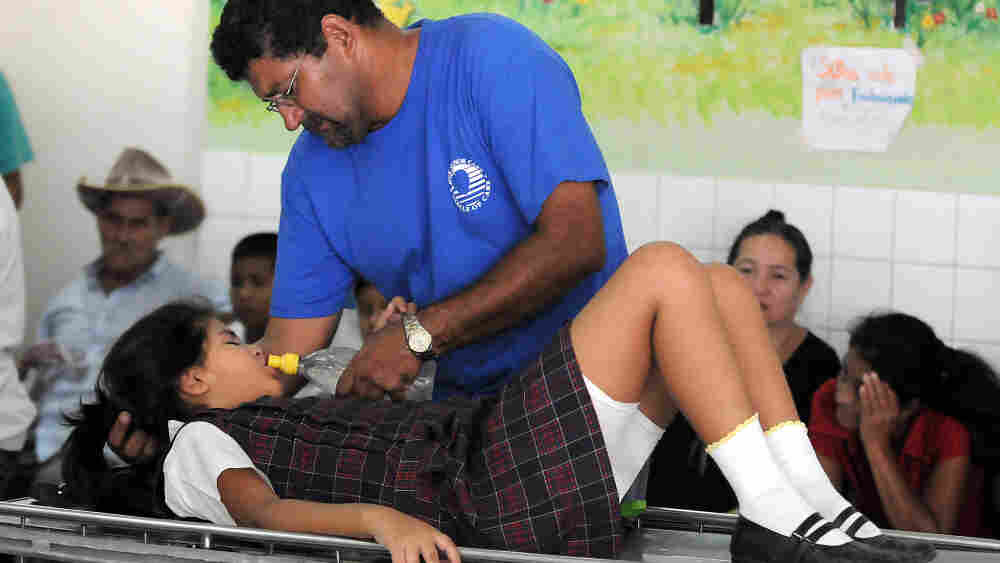 A man helps his dengue fever-stricken daughter in Tegucigalpa, Honduras. In June, Honduran authorities declared a state of emergency due to the high rate of dengue cases reported around the country. Orlando Sierra/AFP hide caption

The race to develop a vaccine against dengue fever may be getting a little closer to the finish line.

The dengue virus, little known in the United States, is endemic to most countries in the tropics thanks to the Aedes aegypti mosquito, which thrives in pools of standing water.

But if you've ever had the illness, you're unlikely to forget it. Sometimes called bonebreak fever, dengue is excruciating with raging fevers accompanied by severe headaches, nausea, and a rash.

Years of work on a vaccine appear to be paying off.

French pharmaceutical giant Sanofi-Aventis is putting its experimental vaccine into the kind of large clinical test that can produce the evidence needed to gain regulatory approval. This comes on the heels of what it claims were several successful smaller trials in Asia and Latin America. The latest study, being conducted in Australia, is expected to take two years to finish .

The World Health Organization estimates that 2.5 billion people worldwide are at risk of getting dengue, and most of them are in Asia and Latin America. But it's also on the rise in Florida and Texas; Key West has reported 57 cases in the last two years. And on Thursday, Miami-Dade County health officials had ominous news of their own: confirmation of the first "locally acquired" case there.

At this stage, the dengue vaccine race lacks some of the unexpected twists and bitter rivalries of the polio vaccine race, but it's gotten steadily more interesting as more heavy hitters take the field.

Aside from Sanofi, GlaxoSmithKline is conducting trials in Thailand, the United States, and Puerto Rico, while the U.S. government threw its hat into the ring with an announcement in August from the National Institutes of Health that it would start its own tests. And don't underestimate dark horse Brazil: its Instituto Butantan, best known for a snake farm where researchers milk snakes to make antivenoms, is now running its own trials with the NIH strains.

Every year there are 250,000 to 500,000 cases of severe cases of dengue and more than 20,000 deaths, typically from the worst permutation of the disease called dengue hemorrhagic fever, according to the World Health Organization.  There is no treatment for any version of it.

Most of the vaccines in trials right now are tetravalents, meaning that they aim to protect against all four dengue viruses, or serotypes. Safety concerns about tetravalents had slowed down the race, but Sanofi's dengue honcho Jean Lang tells Shots that its results in proof-of-concept studies showed the vaccine is "safe and well-tolerated" and that it produced a solid immune response against all four type of dengue viruses after three doses

George Washington University's Dr. Peter Hotez, who's president of the Sabin Vaccine Institute, says the spread of dengue in middle-income countries like Singapore and Brazil had added a lot of urgency. "It's a pleasant surprise that dengue has now piqued the interest of two large pharmaceutical companies," he says. Does Hotez see  take a gander at a possible winner? No. "There really could be multiple victors," he said.