Accessibility links
Global Health Leader Sees AIDS At Turning Point After 30 Years : Shots - Health News Since the HIV/AIDS pandemic peaked in 1999, safer-sex education and widespread condom use have brought down the number of new infections by 19 percent, according to a new report from UNAIDS. 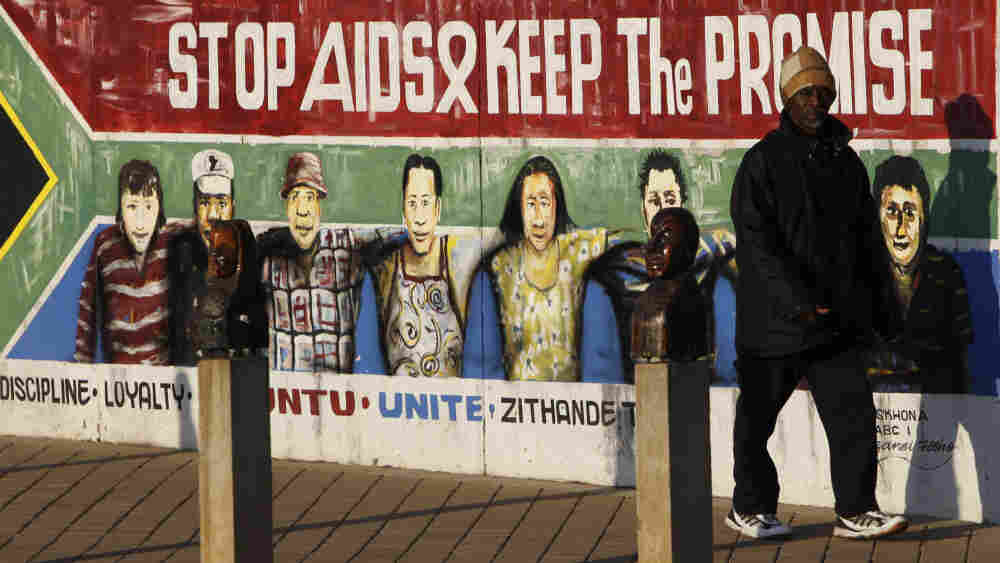 But all is not gloom and doom.

Since the pandemic peaked in 1999, safer-sex education and widespread condom use have brought down the number of new infections by 19 percent, according to a state-of-the-pandemic report just issued by UNAIDS, the United Nations agency charged with leading the fight against AIDS.

Nearly 20 percent fewer people are dying of AIDS than in 2004, largely because of new treatments. Just yesterday, we reported on a promising new daily regimen to prevent HIV transmission.

But these gains are at risk in a world struggling with economic stagnation. That has Michel Sidibé, the head of UNAIDS, deeply worried. He talked about it with me. Here's an edited version of our conversation.

What's the most important thing you want people to take away from this year's report?

I think the exciting news is we can say to the world that this year we have managed to break the trajectory of the AIDS epidemic. We have 56 countries that have managed to stabilize or slow down the rate of AIDS infection, which is very important. We are having fewer people infected, fewer people dying from HIV infection.

But last week the British Medical Journal published an analysis  by Stanford University researchers saying the goal of universal treatment is slipping out of reach. Do you agree?

We have been trying to make sure we increase the number of people in need of treatment. Just five years ago we had less than 500,000 on treatment. Today it's five million.

But we know that 10 million people are waiting for treatment. We know we will not be able to continue with the model we have because it is very costly. We need to sustain our progress and mobilize more resources.

Originally, 2010 was set as the goal for getting everyone on HIV treatment who needs it. Are you just pushing back the target date, or are you saying now that universal treatment is no longer a realistic goal?

Our goal is now 2015. That is realistic, if we manage to bring in the concept of what we call Treatment 2.0 – simpler, one-a-day pills that are not as costly, that can keep people on first-line treatment for a longer time without developing resistance to the virus.

One other major goal on this road is to make sure we don't have babies born anymore with HIV in the world. We still have 400,000 babies born with HIV every year in Africa.

We need to put all the pregnant women who are HIV-positive on treatment, and make sure that when their babies are born free of HIV, we keep those mothers alive. I think that is possible. The technology is there, and we can do it.

I gather you want more of the money to expand HIV treatment to come from the most heavily AIDS-affected nations themselves, rather than only from outside countries. And I was surprised to see in the report that 52 percent of HIV/AIDS funding in low- and middle-income countries now comes from those countries' domestic budgets.

Yes, for example, South Africa, which has had years of inertia, has been increasing its HIV/AIDS budget by 30 percent; they're putting $1 billion into the fight. We're seeing increases in Kenya, Uganda. But still, 94 percent of the people on treatment today in the developing world are based on resources from the Global Fund to Fight AIDS, TB and Malaria and PEPFAR (the US President's Emergency Fund for AIDS Relief). That is not sustainable.

We cannot put someone on treatment today, knowing this person will be on treatment for the rest of his life, based only on resources coming from outside the country. So it's very important to ask national governments to allocate between 2.5 and 3 percent of their revenue to HIV, depending on their HIV prevalence.

I gather contributions and pledges from donor nations to the Global Fund in the latest round are less than what the Fund says it needs to stay even.

I am really concerned, I am scared with what I'm seeing. Because I'm seeing a reduction for the first time in global resources for fighting HIV/AIDS. And that is very risky. Because the gains made through global solidarity are very fragile.

We have five million people on treatment – if we stop, these people will start dying six months from now. Most of them don't know what will happen to them. And most of them are from the poorest segments of society.

What can you do?

We need to mobilize more resources. It won't be possible (to sustain progress) with the traditional funding channels we have now.

The US is paying almost 60 percent of the total budget. Without its contribution, the AIDS response would certainly not be where we are today and we would risk a major collapse. But it's time to think about shared responsibility. We need to engage countries like China, Brazil and India in this concept of shared responsibility.

Are you finding countries receptive in the current economic climate?

People are saying we are in a global recession, we are facing a financial crisis, we have high unemployment. Which is true. But what I am saying to them is please, when you're making your macroeconomic adjustment, try to make it with a human face. We cannot say that in the name of a financial crisis, we will abandon those five million people on treatment.