Accessibility links
More Recall Woes For J&J Include Rolaids, Children's Benadryl : Shots - Health News A House committee investigation into Johnson & Johnson's spate of recent recalls continues for now, but when Republicans take over the committee in January, that could change. 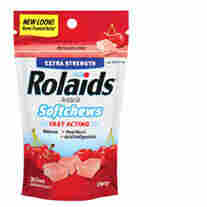 Tummy still a bit unsettled after the big eating holiday?  Reach for the Rolaids carefully. About 71,500 packages of the over-the-counter antacid have been recalled for quality problems -- not a lot of product -- but it's the latest in a seemingly endless parade of problems with medications made by pharmaceuticals giant Johnson & Johnson.

This latest recall was announced the Monday before Thanksgiving, a time when people were probably paying more attention to travel plans and gravy recipes than to bad news about popular remedies.

How bad a year has it been for J&J?  Let us count the ways. Here's the tally of recalls involving J&J products over the past 12 months:

These latest recalls throw more fuel on an investigation of J&J's practices by the House Government Oversight Committee. "We haven't gotten to the bottom of this yet," Jenny Rosenberg, communications director for the committee, told Shots.

Stay tuned when the 112th Congress convenes in January to see if the change in congressional leadership lets the Pharma giant off the hook.