Accessibility links
New Questions Raised On Chemicals In Soaps, Plastics : Shots - Health News A new study is linking higher levels of triclosan to allergies in kids and Bisphenol-A exposure to changes in adult immune systems raises new health questions. But the concerns about these chemicals are far from settled. 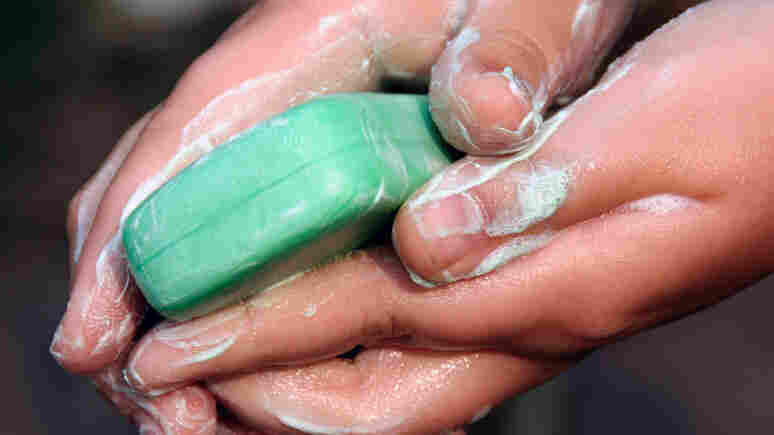 Scrubbing too much might be a problem, scientists say. iStockphoto.com hide caption

There may be such a thing as being too clean, says Allison Aiello, an associate professor at the University of Michigan School of Public Health.

Aiello and her colleagues published a study that suggests kids with higher exposure to triclosan -- which gets into our bodies via everything from antimicrobial soap to toothpaste to cutting boards -- may cause them to be more frequently diagnosed with allergies.

Meanwhile, adults exposed to higher doses of Bisphenol A (BPA), which is found in many plastics like the linings of food cans and baby bottles, may also have trouble with their immune systems, the study finds.

The study looked at data collected from the 2003-2006 National Health and Nutrition Examination Survey. Researchers compared urinary BPA and triclosan with cytomegalovirus (CMV) antibody levels and, separately, a diagnoses of allergies or hay fever in a sample of U.S. adults and children over age 6, to determine immune system changes.

Exposure levels were well within existing limits - but the findings raise questions about how much exposure could cause changes in our bodies.

The authors caution that the study is not definitive -- more research needs to be done to pin down the exact relationship between the chemicals and the immune system.

"We wanted to begin to address this gap in our understanding of how prevalent chemicals such as BPA and triclosan influence immune function, because our immune systems play a crucial role in determining our overall health status," Erin Rees Clayton, a U-M researcher told the Montreal paper The Gazette.

Both triclosan and BPA have long been suspected of causing health problems, the 100 million dollar question is whether we should worry about the low-level exposure most of us get.

Some governments aren't waiting for all the answers.

The European Commission voted to ban BPA from baby bottles on Thursday, just a week after Sen. Dianne Feinstein (D-CA) dropped her efforts to get a similar ban attached to the food safety bill now going through the Senate.

The American Chemistry Council thinks all the fuss is premature. ACC's Steve Hentges told USA Today: "Based on the science, an international panel of experts organized by the World Health Organization recently concluded that public health measures on BPA are premature."

The FDA is studying BPA's impact on human health and safety.

Meanwhile, the FDA has also been studying triclosan. It said in April that it doesn't have enough data to recommend consumers stop using products containing triclosan.