Accessibility links
Why It's So Easy To Give Kids The Wrong Dose Of Medicine : Shots - Health News Nearly all of the top over-the-counter children's medications contained confusing dosing instructions, according to a new study. For example, the instructions on the bottle give teaspoon measurements, but the dosing cup marks milliliters.

If the recommended dose on a bottle of allergy medicine is a teaspoon or tablespoon, lots of us reach in the kitchen drawer. 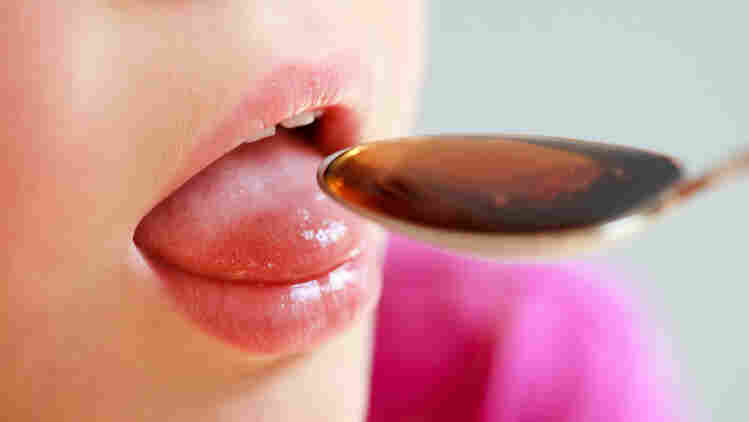 How does your child's spoonful of medicine measure up? iStockphoto.com hide caption

But kitchen spoons are notoriously inaccurate. "They can be way off," says physician Darren DeWalt of the University of North Carolina. Some kitchen teaspoons are twice as big as others, says DeWalt.

Even if you mean well, it's very easy to make a mistake. In theory, the little plastic "dosing" cups or droppers that come with medicine bottles should improve accuracy. But a study just published online by JAMA finds 98 percent of the top-selling 200 over-the-counter children's medications sold in 2009 came with confusing inconsistencies in dosing instructions.

A common mix-up: The instructions on the bottle give teaspoon measurements, but the dosing cup marks milliliters, or ml. And who remembers this conversion?

The Food and Drug Administration has issued draft guidelines aimed at making the instructions on over-the-counter medicines less confusing.

They're moving closer to adopting consistent units of measurement, so that the directions on the bottle match the markings on the dosing device.

"It will take between now and next year to fully implement the guidelines," says CHPA's Barbara Kochanowski. So far, the group hasn't committed to a milliliter-only system.

These changes may seem small, but UNC's DeWalt, who wrote an accompanying editorial for JAMA, argues that they're important. He says deaths from overdoses of over-the-counter medicines are fairly rare. But think about potent allergy medicines. "If I was to give my child too much Benadryl, it would pretty much knock them out," DeWalt says.

DeWalt argues that pharmaceutical companies spend hundreds of millions of dollars bringing products to market, but they don't spend very much money explaining to parents how to give this medicine to kids.

"I think a little more attention to this could provide a safer environment," he says. And maybe help parents -- and kids -- sleep a little easier.