Accessibility links
Pregnant Women Overcame Fears About Vaccine During Swine Flu Crisis : Shots - Health News Data just out from the Centers for Disease Control and Prevention show that half of pregnant women got flu shots last flu season, despite worries about how the swine flu immunization might affect them and their babies. 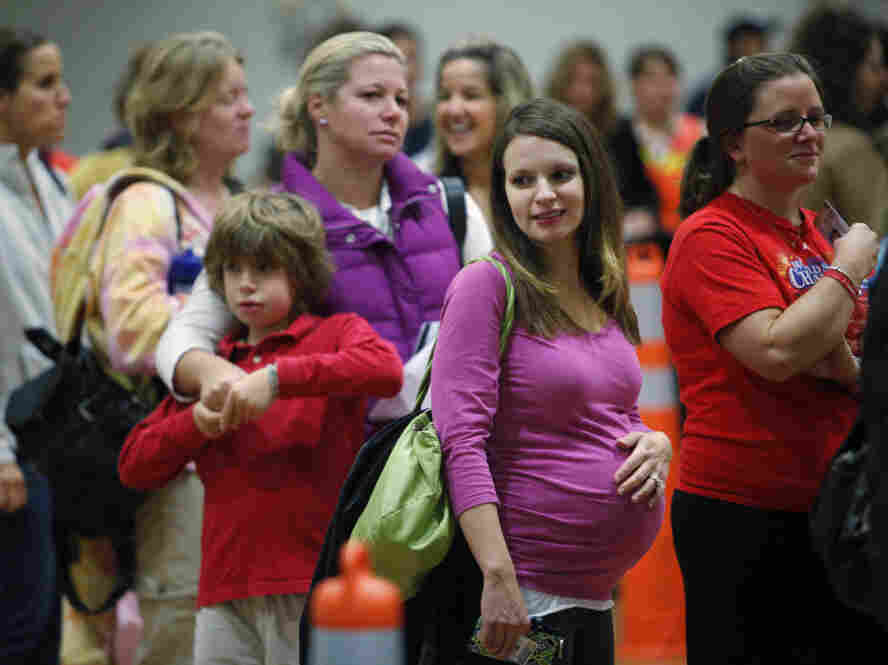 Nicole Andreacchio, second from the right, was seven months pregnant when she went to get vaccinated against swine flu in Maple Glen, Pa., in October 2009. Matt Rourke/AP hide caption

Faced last fall and winter with a new pandemic flu virus that was especially dangerous for pregnant women, those women overcame their fears of flu vaccine to a remarkable degree.

Data just out from the Centers for Disease Control and Prevention show that half of pregnant women got flu shots -- both the seasonal kind and the special H1N1 swine flu vaccine. In the prior two flu seasons, only 11 to 24 percent of pregnant women got vaccinated, despite a lot of jawboning from health officials.

In fact, last flu season pregnant women got vaccinated at a substantially higher rate than adults in general.

Getting pregnant women vaccinated against the flu is always an uphill battle. They're understandably reluctant to put anything into their bodies unless they're convinced it won't harm their unborn fetus. And many doctors are wary too.

Vaccination was a particularly hard sell during the flu pandemic of '09-'10, because of the perception that the special vaccine made for the new H1N1 flu was rushed through testing.

The new data come from surveys of more than 11,000 women in 10 states. There was a wide swing in vaccination rates among those states -- from 37 to 68 percent for seasonal flu vaccine, and 27 to 72 percent for swine flu vaccine.

Still, that's a big jump over the ordinary. Health officials would like to sustain it, but it's anybody's guess whether that's possible without the kind of massive campaign they mounted last year.

One key to immunization success, the CDC says, was that many doctors urged pregnant women to get vaccinated. Two-thirds of women whose health care providers recommended it got the vaccine, versus only 20 percent of those who didn't get that advice.

From 25 to 31 percent of women who didn't get flu shots said it was because their doctor didn't mention it.

But a much larger proportion of unvaccinated women said they didn't get flu shots because they were worried about side effects for themselves or their babies. Nearly two out of three cited that as the reason they didn't get the pandemic H1N1 vaccine, versus less than half for seasonal flu vaccine.