Accessibility links
Why One Walgreens Can't Fill Prescriptions : Shots - Health News A decades-old law in North Dakota shuts most big chain pharmacies out of the state. But is there a downside for consumers?

The drug store that Bonnie Thom and her daughter own isn't just the only pharmacy in their 1,000-person town of Velva, N.D. -- it's the only one in their county. 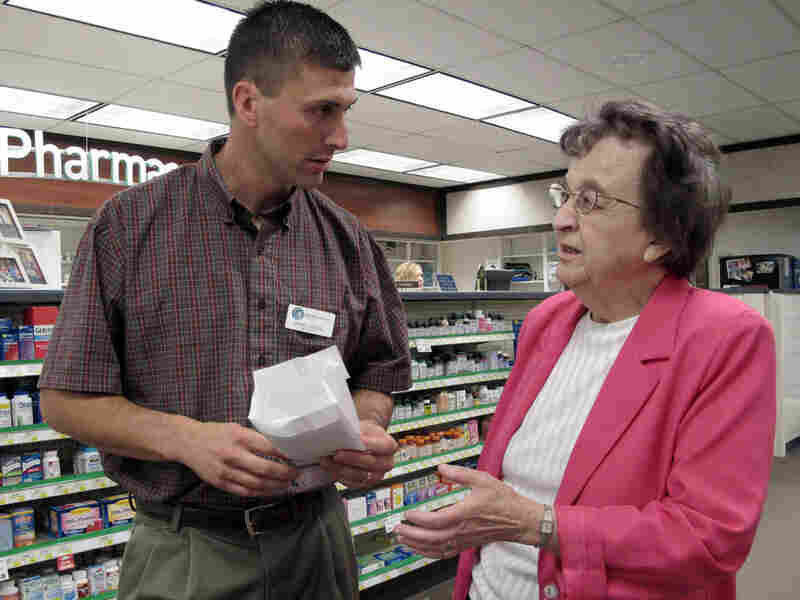 Shane Wendel, a pharmacist and owner of the Central Pharmacy in New Rockford, N.D., speaks to customer Marvel Ebenhahn about her prescription. "I get to choose how I direct patient care, and what I spend my time on to help my patients," Wendel tells Shots. Dale Wetzel/AP hide caption 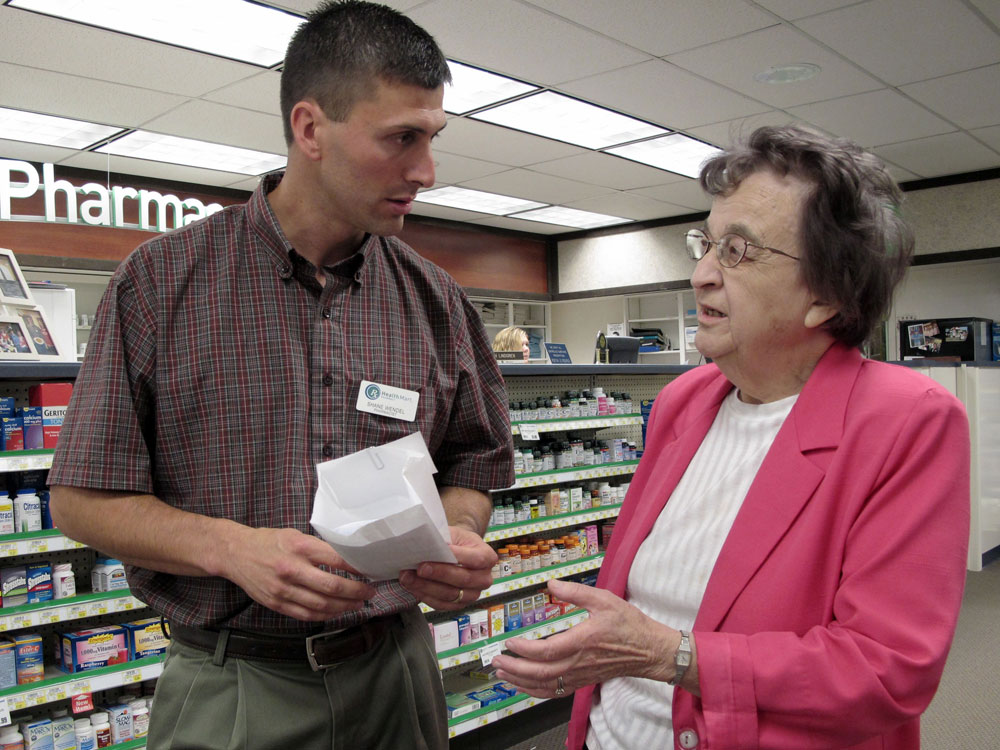 Shane Wendel, a pharmacist and owner of the Central Pharmacy in New Rockford, N.D., speaks to customer Marvel Ebenhahn about her prescription. "I get to choose how I direct patient care, and what I spend my time on to help my patients," Wendel tells Shots.

Their pharmacy is pretty typical: It offers vaccinations and blood pressure screenings, and it sells greeting cards, school supplies and cosmetics. What they don't have is a corporate headquarters to answer to.

And in North Dakota pharmacies, that's the norm.

Because of a state law passed nearly 50 years ago, North Dakota is the only state that requires its pharmacies be 51 percent owned by a pharmacist.

The state does have a few exceptions. Hospitals are allowed to operate their own pharmacies, and chain store pharmacies older than the law were grandfathered in. Otherwise, most of the state's nearly 250 pharmacies comply.

Opponents say the law puts consumers at a disadvantage. If larger stores like  Target, Wal-Mart and Walgreens could set up pharmacies in North Dakota, it would mean lower drug prices, says Patrick Davis, a consultant for North Dakotans for Affordable Healthcare, a coalition of North Dakota citizens, hospitals and health care groups.  (Davis says the group has received more than $200,000 in funding from Wal-Mart and Walgreens.)

"I think you have to realize there's a hunger for the consumer in North Dakota to get lower prices," Davis says, adding that many people say they go outside the state to buy prescription drugs.

The nonpartisan site Stateline reports that there might be something to that. It cites a Kaiser Family Foundation analysis that shows North Dakota per capita spending on drugs and other medical goods in 2004 was higher than in neighboring states.

Consumers might gain savings on drugs -- even if it means driving farther -- at the big chain pharmacies. But they could lose out on access to health care if the small pharmacies shut down, especially in the rural, remote regions of the state where the local pharmacist might be the only health care practitioner for miles. Mike Schwab, executive vice president of the North Dakota Pharmacists Association, says that the state's ownership law means access.

"In North Dakota, we have more [pharmacists] per 100,000 people than surrounding states in the Midwest," he says, referencing figures from the U.S. Department of Health and Human Services.

The personal contact pharmacists have with their patients can result in consumers saving money, too. Shane Wendel, a pharmacist and owner of the Central Pharmacy in the 1,500-person town of New Rockford, N.D., says he fills much fewer prescriptions than he would if he were working in a national chain.

"That allows me a lot more time to visit with patients, engage with patients," he says. For Wendel, that can mean working with patients to make sure they're aware of more affordable options if they're prescribed a pricey drug.

With stalwart supporters on both sides of the issue, it's no surprise that the ownership law has been challenged a lot. In fact, the issue went to the U.S. Supreme Court in 1973; a bill to repeal the law failed in the state's legislature in 2009; and just this year, groups gathered signatures on a petition to put the issue on the November ballot (but their petition was rejected because it didn't list the initiative's sponsors when it was circulated).

The ownership law may resurface again in the state's legislature as soon as 2011, and if it gets repealed, Thom says she's not sure what would happen.

"As in any business, there's only so much business to go around -- and keep everyone in business," Thom says.

She offers competitive prices, she says.  But if chains stores opened pharmacies 25 miles up the road in the much-larger town of Minot and started operating them as a loss leader, Thom is uncertain whether she has the reserve to weather the storm.