Accessibility links
Diet Pill Endorsed By FDA Advisers : Shots - Health News Contrave, an experimental diet pill, got a recommendation for approval, reversing a trend against such medicines lately. If the Food and Drug Administration goes along with the advice, it would be the first diet drug approved in more than a decade.

Hey, guess what? An experimental diet drug can actually get a thumbs up for approval from a panel of experts whose job is to give advice to the Food and Drug Administration. 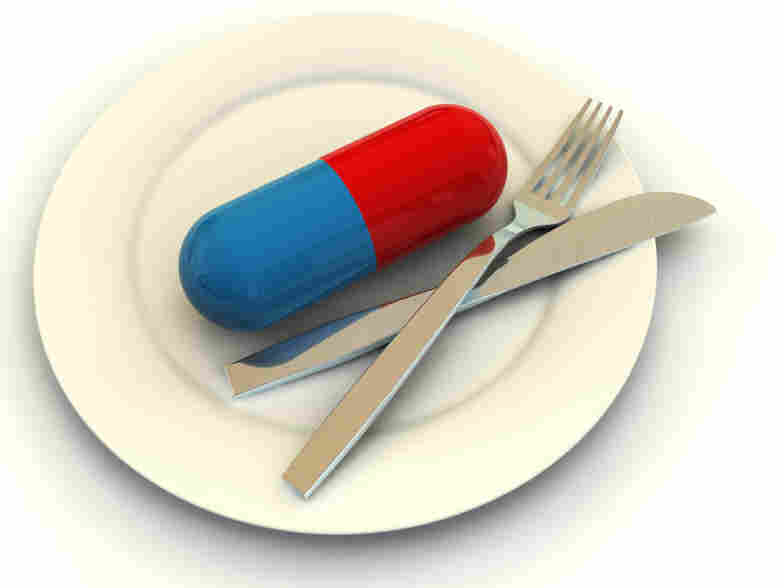 Is a new diet pill coming to the menu? iStockphoto.com hide caption

Lately these panel meetings have been about as much fun as watching a hanging judge go about his business. But Orexigen's drug Contrave beat the rap laid down on two other diet pills -- Arena's lorcaserin and Vivus' Qnexa. Previously, the same panel had voted down those two medicines.

In a 13-7 vote, the group of experts recommended that the FDA approve  Contrave, a combination of two already approved medicines -- antidepressant buproprion and naltrexone, typically used to fight alcoholism and drug dependence.

Probably just as important as the overall nod in favor of the drug was a separate 11-8 vote by the committee recommending that a study of the heart risks posed by the drug be done after FDA approval -- not beforehand.

The FDA usually follows the advice of these panels, but not always. The agency has a January deadline to make a decision, though it's entirely possible the regulators will say they need a little more time, as they did recently for the evaluation of an experimental lupus drug called Benlysta.

So much for the good news. Now a dose of reality. Cardiologist Sanjay Kaul, an influential voice on this panel and others, voted against Contrave. "The 13-7 vote is going to create a buzz in the press reports and not accurately reflect the tepid enthusiasm for this drug," Kaul said, according to the blog CardioBrief.

What's the problem? Well, the weight loss found in studies of the drug is pretty modest -- around 5 percent after about a year. That's the minimum FDA considers to be successful. On another count, Contrave comes up short. It didn't beat the weight-loss people taking a placebo achieved by more than 5 percentage point.

And there are some real risks: higher blood pressure and a quickening of heartbeats. Kaul unfavorably compared the drug's combination of puny weight loss and heightened cardiovascular risks to the profile for Meridia, recently taken off the market. "There is an opportunity for us to learn from history, or else we are likely to repeat it," Kaul said in a follow-up note to CardioBrief.