Accessibility links
Max Starkloff, Pioneer In Independent Living For Disabled, Dies At 73 : Shots - Health News After an automobile left him a quadriplegic, Starkloff lived in an nursing home for more than a decade. He was determined to find a way to live independently and made it a life's work. 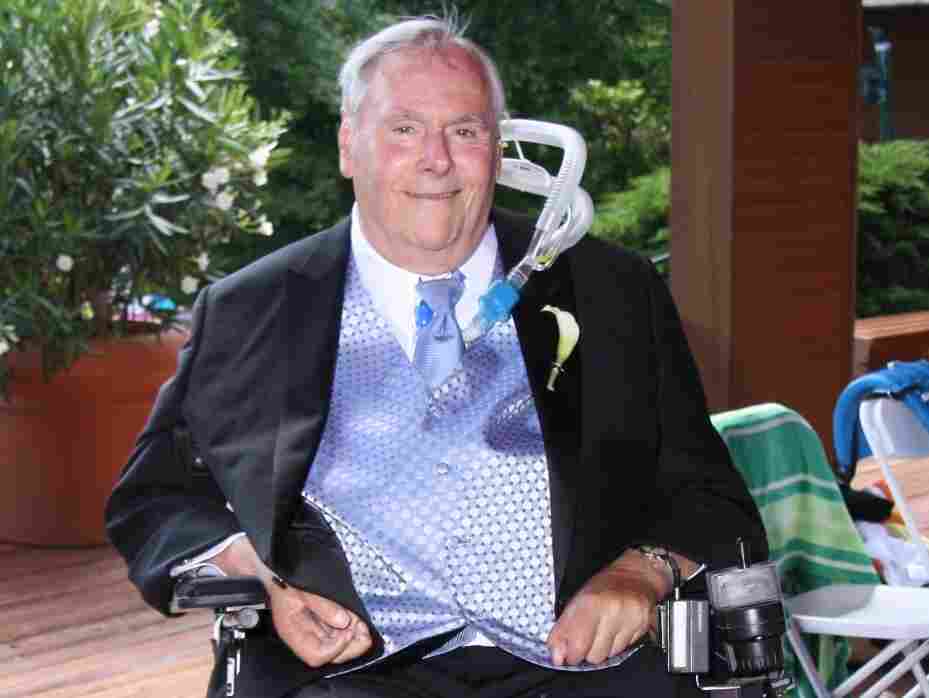 Max Starkloff on the wedding day for his daughter Meaghan. Courtesy of the Starkloff family hide caption 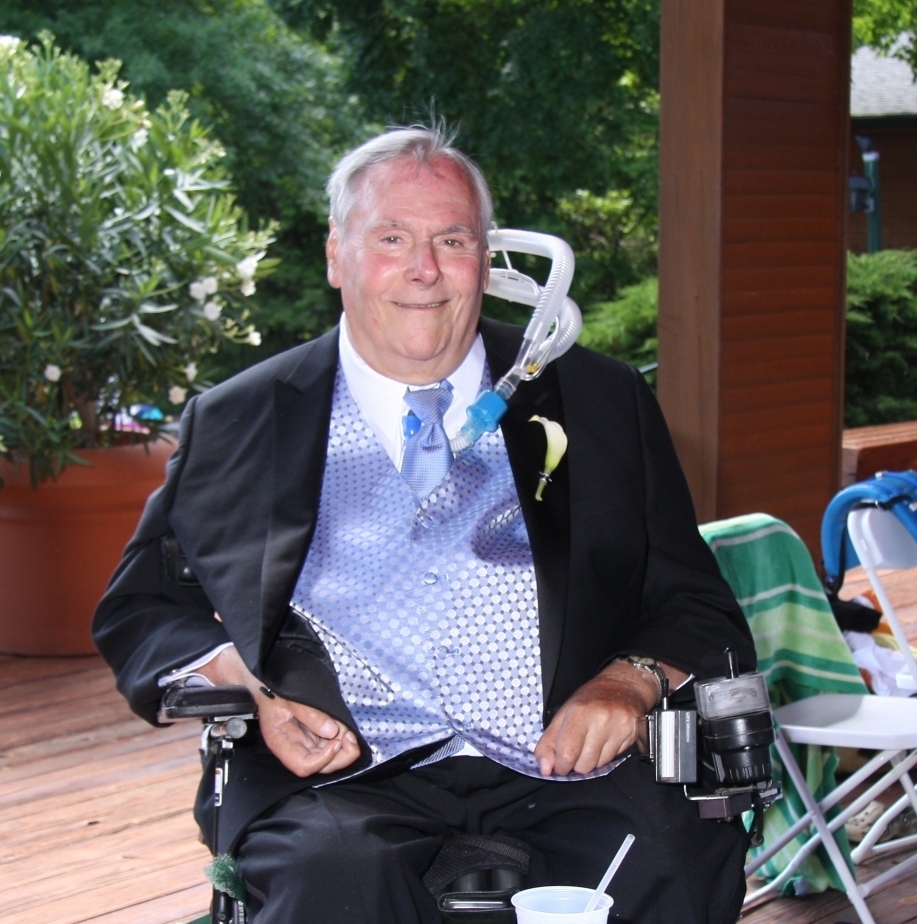 Max Starkloff on the wedding day for his daughter Meaghan.

Courtesy of the Starkloff family

Max Starkloff lived in a nursing home on a hill outside St. Louis from the time he was 26 until he turned 38. The day after he moved out, he did something he knew he couldn't do and stay in a nursing home: He got married.

Starkloff and his wife Colleen then started Paraquad, a group that became a national leader in helping other people with severe disabilities live at home, find jobs and lead regular lives. Starkloff died of complications from the flu on December 27. He was 73.

He lived much longer than anyone had expected when he became a quadriplegic in 1959. His Austin-Healy convertible slipped off a winding road at midnight.

Starkloff became a pioneer of something called the "independent living movement" -- a grassroots movement by young people with severe disabilities to take control of their own care. At its core was a desire to lead life "not as a patient," Starkloff explained, but like anyone else: to get a job, find love, marry, raise a family -- all things that Starkloff achieved. And to do that meant living outside a medical institution like a nursing home.

At St. Joseph's Hill Infirmary, the nursing home where Starkloff lived for more than a decade, one of the Franciscan brothers taught the handsome ex-Marine how to paint, by clenching a paintbrush between his teeth. Starkloff studied the German Expressionists and tried to mimic their style.

He thought he had found, through art, a way to come to peace with his fate to live as a quadriplegic. A St. Louis newspaper story in 1964 told, as the subtitle promised, "how a courageous former Marine, paralyzed from neck down in auto crash, found a new interest in life--in painting."  The story tried to find the happy ending to cruel fate. "Determination and a will to be creative met and merged with an artistic talent, a talent which might never have been discovered had the accident not have happened," the writer said of Starkloff.

But Starkloff wasn't sure. Did he truly possess a hidden talent or was he simply getting well-meaning but paternalistic encouragement? He got his answer when he showed his work to other artists: Not bad for an amateur.

The discovery of the false flattery made Starkloff angry and depressed and, finally, he decided he needed to do more to help himself and not rely so much upon others.

One night, in his nursing home bed, a dream spurred him on. "It sounds corny, but it's true," Starkloff once told me in an interview. "I had a dream that I started an organization to deal with all these issues, mainly housing." He'd have to build an alternative to a nursing home for a young quadriplegic. But he had no idea what to do next.

The solution came when a friend invited him to California in 1970. One of the Franciscan brothers at the nursing home drove him. They ended up in Berkeley, where a group of quadriplegics, led by a man named Ed Roberts, was changing the way Americans looked at disability.

Roberts, a post-polio quadriplegic who spent most of his day in an iron lung, entered the University of California, Berkeley in 1963 and soon dozens more people with severe disabilities, hearing about him, enrolled too. "I'm paralyzed from the neck down, not the neck up," Roberts would say.

He and his friends started the Physically Disabled Students' Program, dedicated to solving any problem that stood between a student with a disability and academic achievement. That meant finding attendants to help them get to class or tracking down engineering majors who could quickly fix a broken wheelchair, since sending a chair back to a dealer could keep a student out of class for weeks.

Starkloff returned to St. Louis determined to raise money to set up something similar. It was a few years later that a romance blossomed with Colleen Kelly, the attractive physical therapist who worked at St. Joseph's. They started dating, which created a bit of a scandal at the nursing home, especially when Colleen would visit his room and lock the door.

Once they married, they raised money for Paraquad. The group got the city to put wheelchair lifts on buses, install sidewalk curb cuts and build those wheelchair-accessible apartments Max had dreamed about. Paraquad became a model for other independent living centers around the country. There are now more than 450 of them around the country, according to the National Council on Independent Living.

And Max Starkloff became a model for other disabled people around the country. He and Colleen were the parents of three children. In addition to starting Paraquad, they more recently the Starkloff Disability Institute.  A funeral mass was celebrated for Starkloff today in St. Louis.