Accessibility links
Who Isn't Wearing A Seat Belt Yet? : Shots - Health News Wearing seat belts has become the "social norm," says the Centers for Disease Control and Prevention. About 85 percent of adults buckle up. States with stricter laws have better results than those that don't. 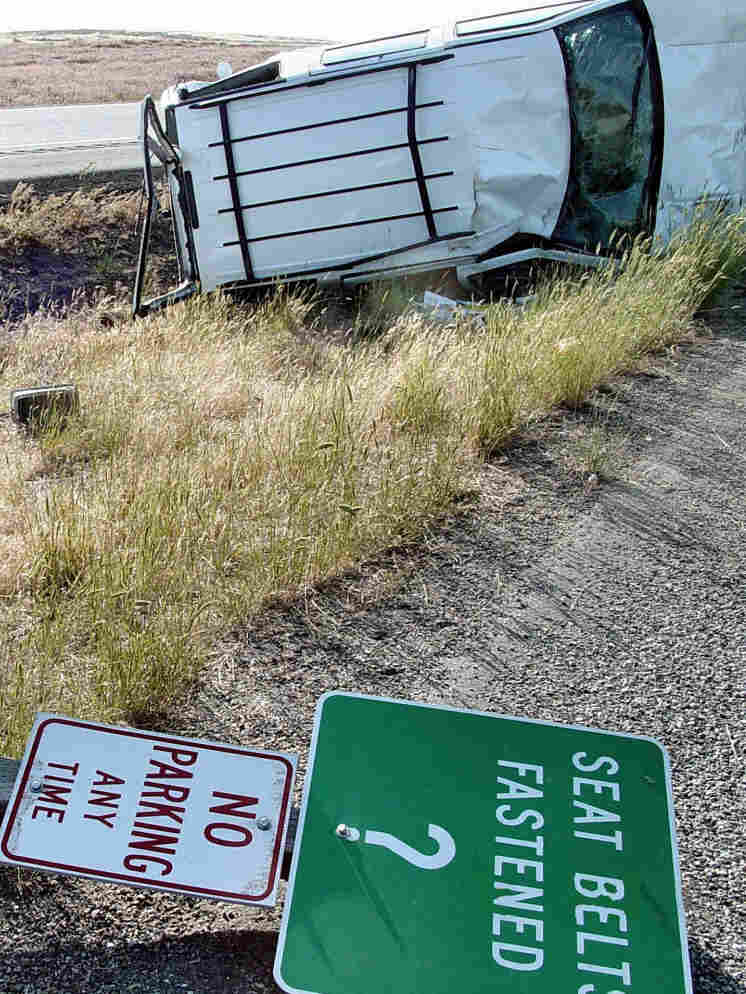 The aftermath of a crash east of Boise, Idaho, in June 2003. Two passengers in the rear seat were not wearing seatbelts and were ejected in the rollover. Van Waggaman/AP/Idaho State Police hide caption

From laws that give cops the power to bust people for not wearing seat belts to kids reprimanding parents from the back seat for not clicking them on fast enough, there are plenty of strong incentives for buckling up.

And, overall, the push for seat belt safety is paying off. The Centers for Disease Control and Prevention figures 85 percent of people were buckling up in 2008 compared with 80.5 percent in 2002, according to a study that was just published.

Still, it must be said, the numbers come from people's own reports about their seat belt habits. The researchers don't think people are exaggerating, though. And even if they are a bit, it's pretty clear that seat belt use is quite high. The CDC even goes so far as to call it "the social norm."

Women are a little more likely than men to wear seat belts. As people get older they're also more likely to strap in, too.

So who's not buckling up? The lowest rate of seat belt use -- 59.2 percent -- was in North Dakota. South Dakota and New Hampshire were only a little better.

States that have primary enforcement laws, meaning a cop can give you a ticket for not buckling up even if you haven't broken some other law, have higher rates of seat belt use -- 88.2 percent overall.

In fact, the CDC researchers note that while a little more than a third of Americans live in states with secondary enforcement laws -- where you've got to screw up something other than belts to get cited --  they account for just about half of the people who aren't buckled in. Still, even there 79.2 percent of adults are strapping themselves in when traveling by car.

For a rundown of state laws, check out this page on the website of the Governors Highway Safety Association.