Accessibility links
Hopeful Signs But Many Questions For Giffords' Medical Outlook : Shots - Health News Rep. Giffords responded to a simple verbal command to show two fingers after surgery, a sign that for now, the speech center of the brain is at least partially intact.

Hopeful Signs But Many Questions For Giffords' Medical Outlook

Hopeful Signs But Many Questions For Giffords' Medical Outlook 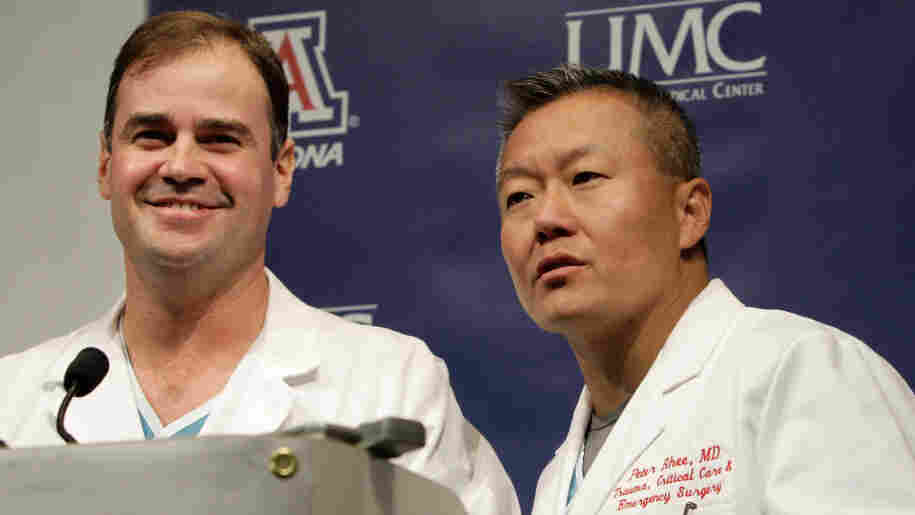 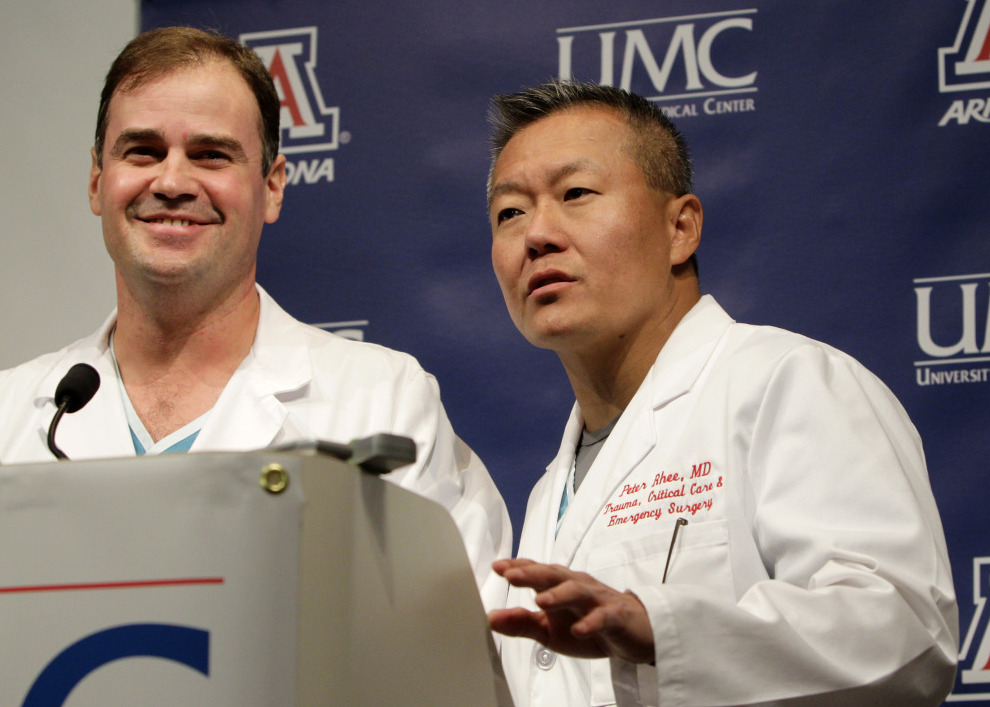 Update: Doctors at the University Medical Center in Tucson said during a media briefing Monday that Rep. Giffords' condition has "stabilized." There has been no change since yesterday, according to UMC chief of surgery Rainer Gruessner.

Giffords is still able to understand basic instructions to move her fingers and toes, neurosurgeon G. Michael Lemole, Jr. said. He said that shows that "not only are the centers in the brain working but they're communicating with one another."

Brain scans show no additional swelling in the brain. "No change is good," Lemole told reporters. "Every day that goes by and we don'’t see an increase, we will be more optimistic."

We have a little more information on the trajectory now.  NPR producer Amy Walters asked if there had been damage to Giffords' vision. "The track of the bullet is higher, away from the base of the skull, where those nerves enter and exit, so that’s a positive thing," Lemole said.

But the injury may have affected her vision, he added, because the nerves that control and process vision run through several different areas of the brain.  Lemole declined to offer an assessment of how well Giffords is able to see. "[I’m] not in a position to do that at this time," he told Walters.

Lemole also declined to answer NPR’s question about whether there’s been any movement in the lower half of her body.  "I don’t want to go into those specifics regarding her case."

The hospital will not have another press conference until Wednesday unless Giffords' condition changes, or there is a change in the other 7 patients remaining in the hospital, according to Gruessner. He said one patient is in serious condition in the intensive care unit; the rest are in the regular hospital wards: four are in serious condition and two are listed in good condition.

There are still many questions surrounding the condition of Rep. Gabrielle Giffords (D-AZ). We expect to hear more at a press conference at noon eastern time today, and NPR's Jeff Brady will be there.

At a press conference Sunday, neurosurgeons at University Medical Center in Tuscon, Arizona, told reporters that Giffords had responded to a simple verbal command to show two fingers after the surgery. That's pretty significant because it means that, for now, the speech center of the brain is at least partially intact, allowing her to process instructions.

It also indicates that she still has some control over muscles and isn't  completely paralyzed.

But Dr. Peter Rhee, who's in charge of her management in the intensive care unit, said she was not verbalizing prior to surgery, which could mean there has been some damage to her ability to speak.

Doctors are watching closely for any verbal communication by Giffords at this point. But they say it may be awhile because the mechanical ventilator that helps her breathe does not permit her to talk. Rhee said Monday morning that she may be able to breathe without a ventilator in a few days.

Also, Giffords is in a medically induced coma -- standard treatment after traumatic brain injuries.  Among other things, the coma reduces the electrical activity of the brain and promotes healing of the brain tissue. Doctors adjust the level of sedation so that they can "wake" Giffords and do the tests needed to judge her function.

Giffords' doctors have been remarkably forthcoming with details on her surgery and condition. In the case of Vice President Dick Cheney, for example, doctors at George Washington Univerisity rarely gave more than basic information about his condition.

Plastic reconstructive surgeons operated on the area above the eyebrow to relieve pressure from a broken bone that was affecting the eye socket, neurosurgeon Dr. Michael Lemole said.

The chief medical concern for Giffords over the next hours and days will be the amount of swelling that occurs in the brain. As tissue dies around the bullet’s path, it exudes fluid. Sometimes the swelling from this fluid is so extensive that it requires additional surgery to relieve pressure on parts of the brain that are still intact.

Surgeons removed the skull on the left half of the brain during surgery Saturday, to give the damaged brain room to swell. Rhee says it will be reimplanted later on. Removing the skull in this way has been one of the major advances in neurosurgery in recent years, partly due to the experience gained during the wars in Iraq and Afghanistan.

Lemole said the next 48-72 hours will be critical.  If Giffords does recover – and that is not certain at this point – any recovery and rehabilitation would take a minimum of weeks, if not months or years, Lemole said.