Accessibility links
Study: Antibiotics Defeat Ear Infections In Kids : Shots - Health News Two studies bring new evidence to the long-running debate on whether antibiotics work for children's ear infections. But experts say doctors should be sure the child really is suffering from an ear infection before writing a prescription. 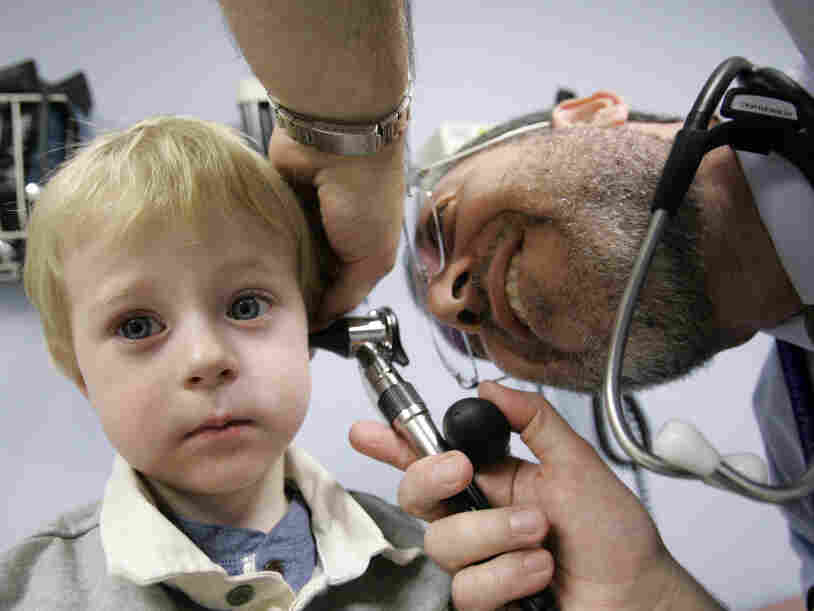 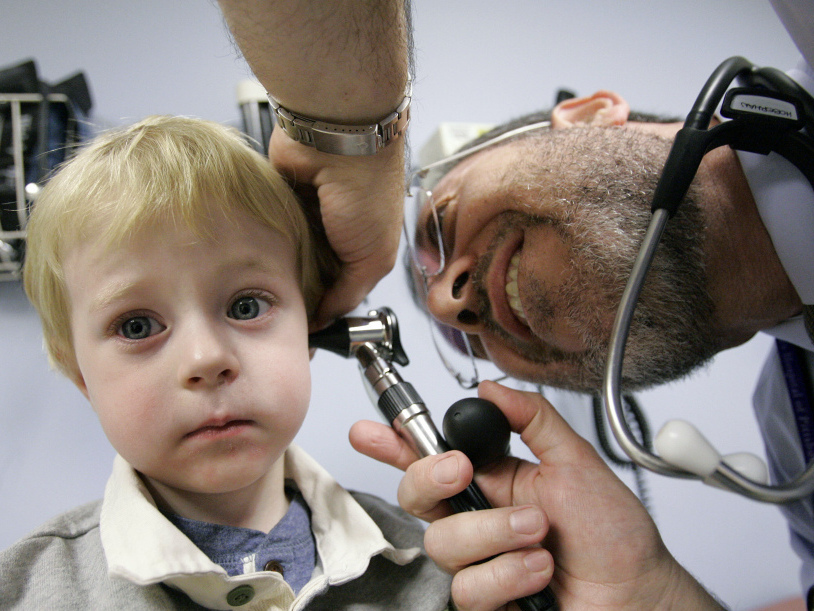 Giancario Gemignani-Hernandez, 2, of Pittsburgh, has his ear examined by Dr. Alejandro Hoberman.

Two new studies add substantial weight to one side of a long-running controversy over whether to give antibiotics to young children suffering from ear infections.

The "wait and see" approach has been enshrined in current guidelines from the American Academy of Pediatrics. It's based on a slew of studies over the past couple of decades indicating that most children with ear infections get better without antibiotics. Some researchers also worry that too many prescriptions are fueling resistance to the drugs.

But the new studies, from the United States and Finland, come down firmly on the side of early antibiotic therapy for kids under age 2 or 3. Both studies, which appear today in the New England Journal of Medicine, find these kids get over painful ear infections faster, and have less severe symptoms, if they get prompt treatment with Augmentin, an inexpensive antibiotic often used to treat respiratory infections.

But there's a big "if." Study authors and other experts say doctors should be sure the child really is suffering from an ear infection before writing that prescription.

Much of the confusion, experts say, has been caused by studies that weren't careful enough about the diagnosis.  If many children in prior studies didn't really have ear infections, then it's not surprising the antibiotics didn't work for them, says Dr. Jerome Klein of Boston University, who wrote an editorial that accompanies the new studies.

But here's the rub – diagnosing ear infections in very young children, who tend to squirm, is not easy.

To do a correct diagnosis, says Dr. Alejandro Hoberman of the University of Pittsburgh, the doctor needs to be able to see the child's eardrum, which may mean cleaning out earwax first. If the eardrum is red and bulging outward, that's a strong sign of a middle-ear infection. The bulge is most likely caused by pus from a bacterial infection that needs antibiotic treatment.

"It is a two- and sometimes a three-person operation to see the eardrum," says Hoberman, who led the US study.

Dr. David Spiro of the Oregon Health Sciences University is an advocate of the wait-and-see approach to treating ear infections. He coauthored a 2006 study that supported it. But Spiro thinks "the pendulum will swing the other way" – that is, toward immediate antibiotic treatment – because of the new studies.

So what's a concerned parent to do? Hoberman says they can cut through some of the fog by asking doctors if their child has the telltale "bulging eardrum" sign that indicates a true ear infection.

And, he notes, they shouldn't be afraid to press their pediatrician. "How bulging is the eardrum? Is it really bulging this time? Or does it look like fluid in the ear? It's OK to ask the question," Hoberman said.