Accessibility links
Doctors Were Big Spenders On Health Lobbying in 2010 : Shots - Health News Amid last year's debate over the federal health overhaul, the American Medical Association was the biggest spender for lobbying operations among health care groups. Overall, though, the top 10 health care players spent 9 percent less than they did the year before.

Doctors Were Big Spenders On Health Lobbying in 2010

Doctors Were Big Spenders On Health Lobbying in 2010

The health care battles didn't end for doctors with the passage of the federal health law last year, and their lobbying shows it.

The American Medical Association was the biggest spender for lobbying operations among health care groups last year. The AMA, which supported the Democratic health law, faced a serious backlash from members angry that planned cuts in Medicare reimbursements weren't reversed by the law. To overturn the cuts, the AMA mounted a strong campaign on Capitol Hill.

The AMA spent nearly $22 million for the year, an increase of nearly 9 percent. That effort helped the organization secure in December "a one year reprieve from the scheduled cuts resulting from the broken Medicare physician payment system," said AMA President Cecil Wilson in a statement to KHN. 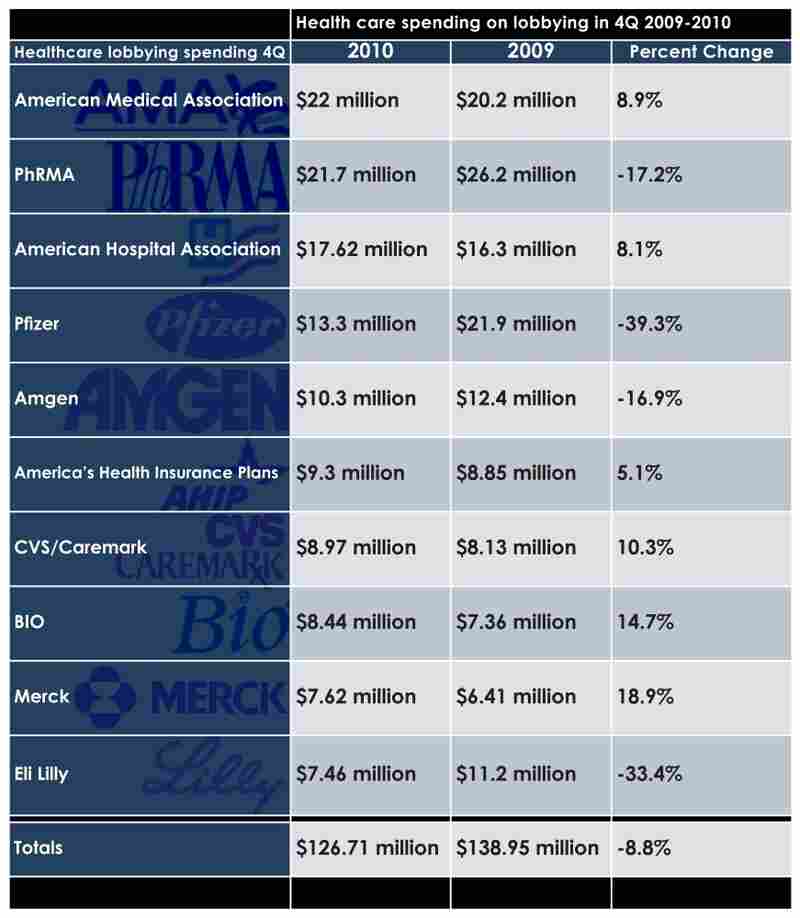 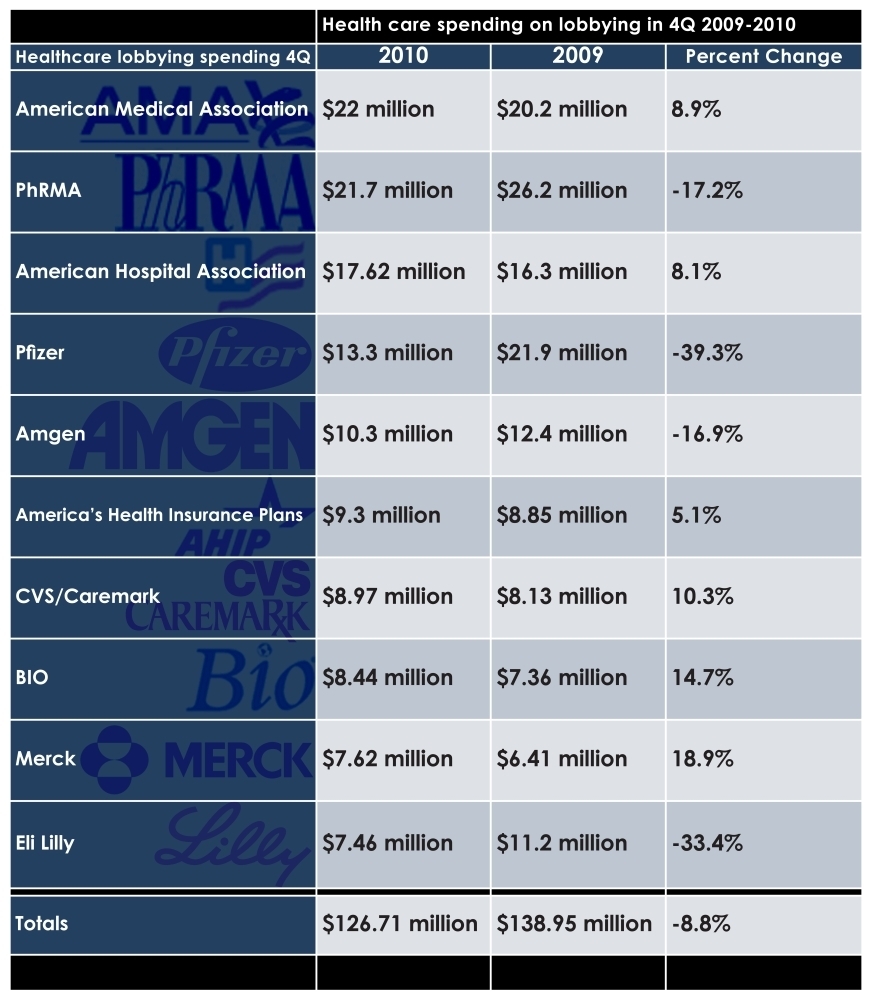 Overall, however, the health law's enactment brought a decrease from the massive effort stakeholders staged during the heated congressional debate in 2009. Ten key health care players spent about $127 million on lobbying, down nearly 9 percent from 2009, according to lobbying documents filed with the Senate Office of Public Records on Jan. 20 for the fourth quarter of 2010 and records from the Center for Responsive Politics as of Jan. 26. The drop was led by pharmaceutical companies and that industry's lobbying group, the Pharmaceutical Research and Manufacturers of America, which cut its lobbying expenditures by 17 percent for the year. PhRMA aggressively lobbied to get the health law passed in 2009, and then announced in early 2010 that its CEO, Billy Tauzin, was leaving.

"When legislation is moving, that is when we are engaged," said Wes Metheny, PhRMA senior vice president, when asked why there had been a decline in spending. The health law passed last March.

However, at least one major drugmaker, Merck & Co., and the CVS/Caremark increased their spending.

In addition to the AMA, the American Hospital Association, America's Health Insurance Plans and the Biotechnology Industry Organization all spent more in 2010 on lobbying than in 2009, driven by lingering issues related to the health overhaul and the Medicare reimbursements.

"The doctors and hospitals still had to get a fix on" Medicare reimbursement rates, said Randy Fenninger, a senior policy adviser at Holland & Knight, whose firm represents hospitals, doctors and insurers. "And for the insurance and biotech industry, there was a lot of (federal) rulemaking which kept them very, very active."

In addition to the 10 health care players, the seniors group AARP, which lobbies on health care as well as a number of other issues, boosted its expenditures by 5 percent to $22.05 million. AARP supported the health law and among its top issues in 2010 was getting a $250 rebate check out to Medicare beneficiaries caught in the "doughnut hole" for prescription drug reimbursements.