Accessibility links
Sudden Cardiac Arrest: Don't Try It At Home : Shots - Health News A national study of 13,000 cardiac arrests that occurred outside a hospital finds the chances of survival are much higher among people whose cardiac arrests happenin public versus than for those whose hearts stopped at home or in a nursing home. 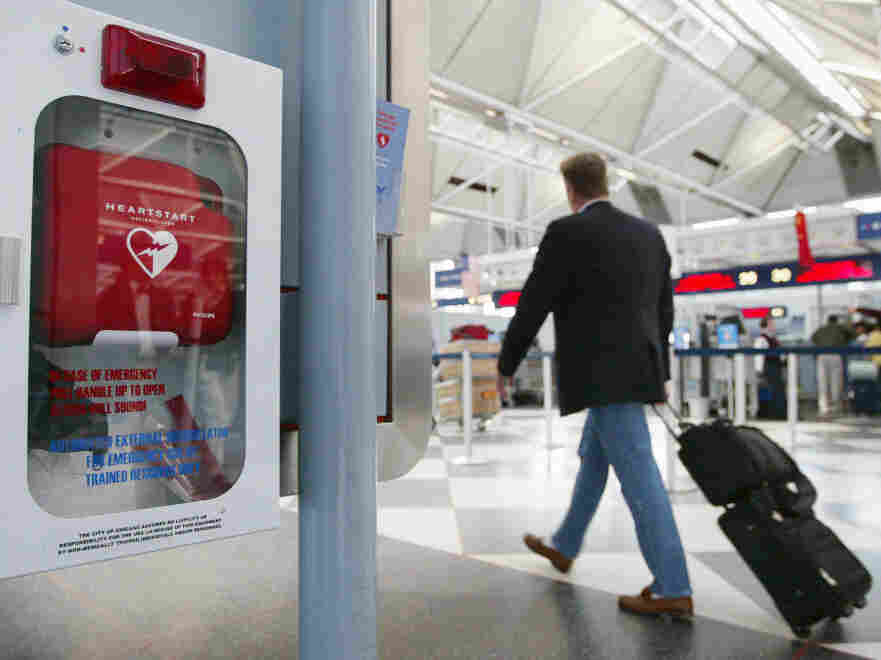 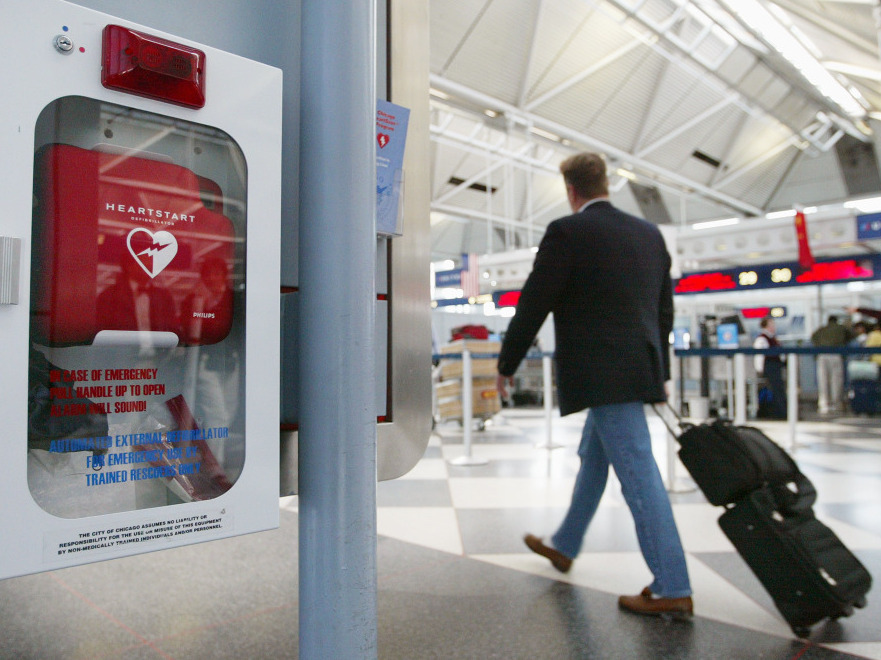 A traveler passes an automated external defibrillator at O'Hare International Airport in Chicago.

Here's a tip if you want to survive a sudden-death heart attack: You'll be much better if you have it in a public place.

A national study of 13,000 cardiac arrests that occurred outside a hospital finds the chances of survival are much higher among people whose cardiac arrests happen in public versus those among those whose hearts stop at home or in a nursing home. The results appear in the latest New England Journal of Medicine.

Here are the numbers: Survival (being discharged from the hospital) was 34 percent for people who had a cardiac arrest in public — but only 12 percent for those stricken at home. That's a 2.5-fold difference.

How come? For starters, when someone has a cardiac arrest in public, it's much more likely a bystander will call 911, or even grab one of those automatic defibrillators that are popping up in more and more places. The devices, though not perfect, can detect abnormal heart rhythms and then shock the heart back into a normal beat.

But this didn't really explain the difference in survival between the outcomes in public and private places. The study found that people having a cardiac arrest in public were more likely to have one that was "shockable" – that is, it was a type of rhythm abnormality that can be treated with a defibrillator.

Overall, only about one in four cardiac arrests are shockable, meaning the heart's main pumping chamber goes into a jazz riff called fibrillation or a frantic rhythm called tachycardia. Either way, you're dead within minutes unless someone shocks your ticker back into line with a defibrillator.

But, curiously, the frequency of shockable heart attacks was higher in public than at home. Nearly 4 out of 5 cardiac arrests in high-traffic public places where automatic defibrillators were available were the more favorable types. That's why survival rates were higher for those struck in public, especially if a bystander administered a shock.

The difference didn't seem to be a matter of greater delays in getting treatment at home. And when people whose cardiac arrests occurred at home got prompt defibrillation treatment, their survival rate wasn't much better than those who got early CPR.

Whatever the reason, study authors say their results underscore the value of putting more automatic defibrillators in public places and making everybody more aware of their importance and how to use them.

And does this mean there's no point in buying an automatic defibrillator for the home? Not necessarily, says Dr. Gust Bardy of the Seattle Institute for Cardiac Research.

Bardy, in an editorial that accompanies the new study, notes there's no evidence showing the home defibrillators save lives. But there's no known downside, and if a spouse or companion really uses the device right away, it should save some lives.

Surprisingly, Bardy's much more skeptical about home CPR – even the more streamlined version that involves only chest compression and does away with the mouth-to-mouth breathing part.