Accessibility links
Why Bacon Is A Gateway To Meat For Vegetarians : Shots - Health News Some vegetarians have spent years accruing knowledge on meat's sinister health effects, factory farming, and the horrors of animals being fattened for slaughter. But bacon sometimes trumps it all, with its powerful aroma, delicate marbled fat , and weekend traditions. 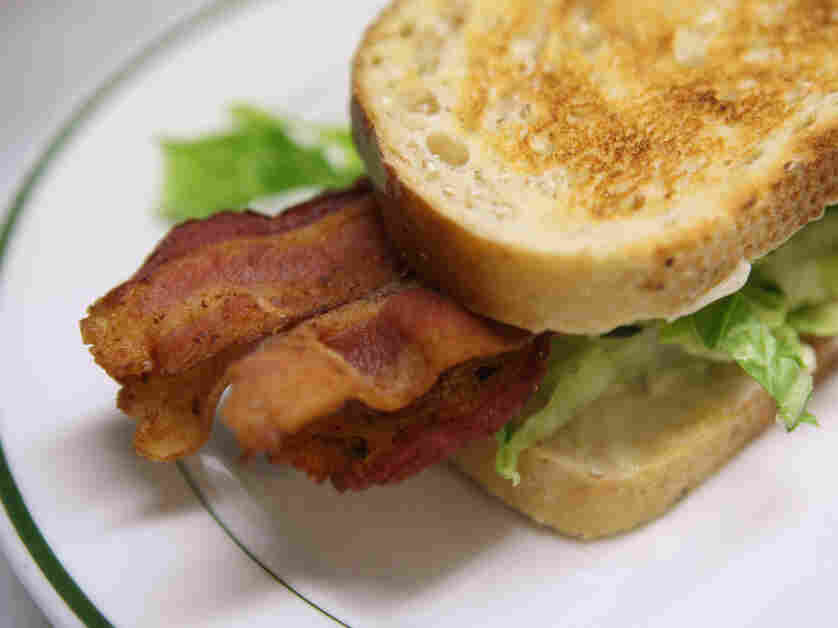 Bacon is cut from the pig's belly, and is one- to two-thirds fat. Justin Sullivan/Getty Images hide caption 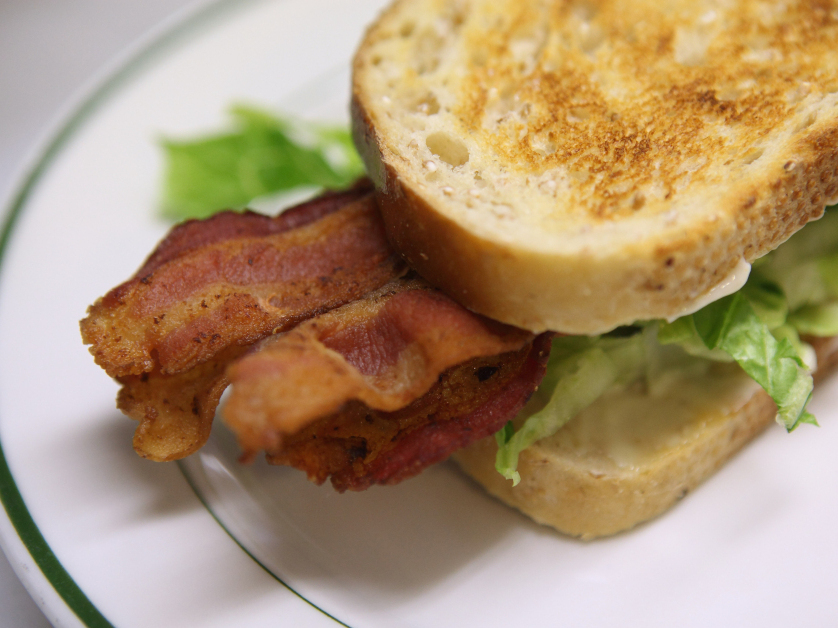 Bacon is cut from the pig's belly, and is one- to two-thirds fat.

Recently, an old friend who has been a vegetarian for more than 15 years shocked us with a story: Last weekend, she ate bacon. Several strips. Straight out of the frying pan where her boyfriend was cooking it.

This wasn't the first time she'd encountered it sizzling there, in all its glistening glory. But for some reason, this time it overpowered her. She was guilty yet gleeful when she told us that she'd allowed bacon back into her life.

But she's not alone. We've heard this story before from many people. It seems that bacon has a way of awakening carnivorous desires within even some of the preachiest of vegetarians. And we set out to find out why.

We asked some scientists who study how food tantalizes the brain, and sociologists who've looked closely at vegetarianism, about bacon's seductive powers.

Our story was familiar to Johan Lundstrom. He's a scientist who runs a lab at the Monell Chemical Senses Center. He studies how the brain processes sensory information, like smell, for a living. He also told us he had an ex-girlfriend who became an ex-vegetarian once she tasted bacon.

Because bacon is one- to two-thirds fat and also has lots of protein, it speaks to our evolutionary quest for calories, Lundstrom says. And since 90 percent of what we taste is really odor, bacon's aggressive smell delivers a powerful hit to our sense of how good it will taste.

"There's an intimate connection between odor and emotion, and odor and memory," Lundstrom says. "When you pair that with the social atmosphere of weekend breakfast and hunger, bacon is in the perfect position to take advantage of how the brain is wired."

Bacon has special status in foodie circles, and that too seems to have enhanced its power over wavering vegetarians. Some have dubbed 2011 as the Year of Meat. BaconToday.com is a veritable daily bacon news source. And in New York you can find Bacon-Palooza, an event NPR covered on All Things Considered last year.

We even talked to a vegetarian, Gwen Sharp, about this, who said, "I have long thought if for some reason I ever started eating meat again, I would start with bacon." We also discovered a chapter — from a scholarly food book — titled "'Bacon sandwiches got the better of me:' Meat-eating and vegetarianism in South-East London."

Still, bacon has plenty of thoughtful opponents, among them Jonathan Safran Foer, author of the recent bestselling vegetarian treatise Eating Animals. Even Stephen Colbert was unable to convince Foer to eat bacon.

Sure, it's loaded with fat and salt, and Americans eat far more of it than what's good for the planet. But in the immortal words of Homer (Simpson, not the other one), "Mmmmm. Bacon."