Accessibility links
Taco Bell Enlists Superheroes To Bite Back At Beef Lawsuit : Shots - Health News Will Taco Bell's Super Delicious Ingredient Force defeat Baron von Bland? A cartoon is part of the fast-food chain's spirited defense of its seasoned beef. A lawsuit claims many of the ingredients aren't beef at all.

Taco Bell Enlists Superheroes To Bite Back At Beef Lawsuit

Taco Bell Enlists Superheroes To Bite Back At Beef Lawsuit

Here's something you don't see every day from a food company: A spirited defense of its products using a spoof of a Saturday morning superhero cartoon.

Can you resist rooting for the Super Delicious Ingredient Force in its quest to defeat Baron von Bland?

The company is in the spotlight after a class action suit was filed by an Alabama law firm, alleging that Taco Bell is playing a little loose with its claims about its seasoned beef taco filling. 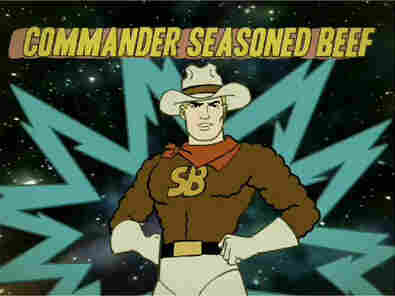 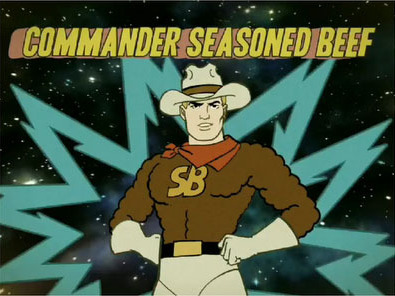 The suit alleges that most of the filling does not meet USDA standards to be called beef because most of it includes stuff other than beef — like oats and seasonings and fillers.

Taco Bell says its beef is 100 percent USDA inspected, and that its recipe is 88 percent beef, 12 percent "secret recipe."

The company is also launching a "Thank you for suing us" full-page ad explaining just what is in its secret recipe for seasoned ground beef.

The ad reveals the ingrediens include water, Mexican spices, onion powder, salt, oats, caramelized sugar, cocoa powder and "other ingredients that contribute to the flavor, moisture, consistency and quality of our seasoned beef."

Why add things to the beef? "Otherwise we'd end up with nothing more than the bland flavor of ground beef, and that doesn't make for great-tasting tacos," Taco Bell's ad says.

The bottom line is — we don't really know that much about what makes our food taste good —and maybe we should take a closer look. Remember Blueberrygate?

A tip of the hat to the company for having a little fun with its response, but food scientists, whip out your test kits. This one's gonna require a little analysis.

The Taco Bell superhero cartoon described in this post was created before the filing of a lawsuit that claimed the chain has misrepresented the ingredients in its beef filling. However, Taco Bell referred to the video, part of the chain's ongoing marketing of its products, in its response to the litigation.