Accessibility links
An Obscure Enzyme May Help Predict Which Cancers Will Spread : Shots - Health News Researchers at the National Institute for Child Health and Human Development say they have a found a way to better predict which cancers will spread within a few years. The test, though intriguing, remains experimental.

An Obscure Enzyme May Help Predict Which Cancers Will Spread

An Obscure Enzyme May Help Predict Which Cancers Will Spread 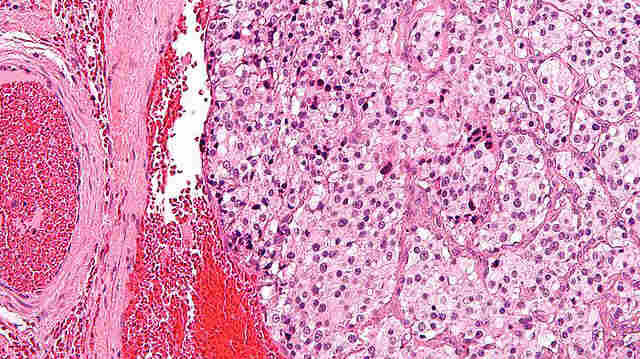 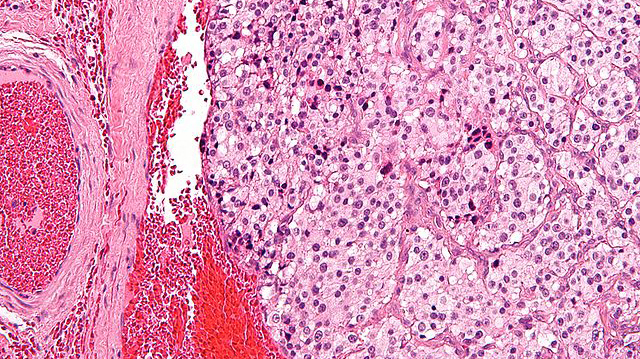 A micrograph of a rare paraganglioma tumor.

Most cancer patients don't die of their initial tumor. It's metastasis —or spread of the cancer to other organs — that ultimately kills them.

That's why a lot of researchers are looking hard for chemicals that predict whether a particular patient's tumor is likely to metastasize. A team of federal researchers claims to have found such a marker — and they say early tests show it's very promising.

The new marker was a surprising find because researchers didn't think it had any relation to cancer. It's a molecular variation of an enzyme that's involved in activating insulin and other hormones.

Biologist Y. Peng Loh of the National Institute for Child Health and Human Development and her colleagues call it "a major breakthrough in biomarker discovery" and say it will prove "invaluable" in predicting cancer recurrence. Their report was released today in the Journal of Clinical Investigation.

The claim is based mainly on 99 patients with liver cancer and another 14 who had rare endocrine tumors called pheochromocytomas and paragangliomas.

Patients whose tumors had high levels of the new marker were much more likely to have cancer recurrence than those who had low levels.

In the liver cancer patients, for instance, a high level predicted metastasis in nine cases out of 10. When levels of the marker were low, patients had a 76 percent chance of being cancer-free two years later.

For now, the use of the marker to unravel cancer is strictly experimental. But Loh says the team was particularly impressed that the new marker was a better predictor than standard "staging" of the liver cancers, based on the size of the primary tumor, the presence of cancer cells in nearby lymph nodes, and evidence of distant spread.

For instance, among 18 patients with early-stage liver cancer, five had high levels of the new marker – and four of these had cancer recurrence within two years. "These patients would normally be told their cancers are not likely to recur and they do not receive further treatment after the surgery," Loh says. But the preliminary marker results suggest such patients should be watched closely for recurrence – despite their favorable early stage.

On the other hand, Loh says, "we found in 12 liver cancer patients with stage IV (advanced) cancer, five of them with very low levels [of the market] did not show recurrence of their cancer two years after surgery." Such patients might not need to be treated aggressively.

Other cancer experts were interested in the new results, but not yet convinced.

"The striking difference in recurrence rates is certainly intriguing," Dr. Barbara Burtness of Fox Chase Cancer Center in Philadelphia told Shots. "But I don't think there's enough here to draw the conclusion that this is a new biomarker."

Burtness would want results from more patients, and a lot more detail on them than the current study provides.