Accessibility links
Dogs Earn More Cred For Sniffing Out Cancer : Shots - Health News In the last five years, dogs of different breeds and ages have shown over and over they can smell cancer on the breath and in tissue samples from cancer patients. But scientists are still unsure about what the dogs are smelling. 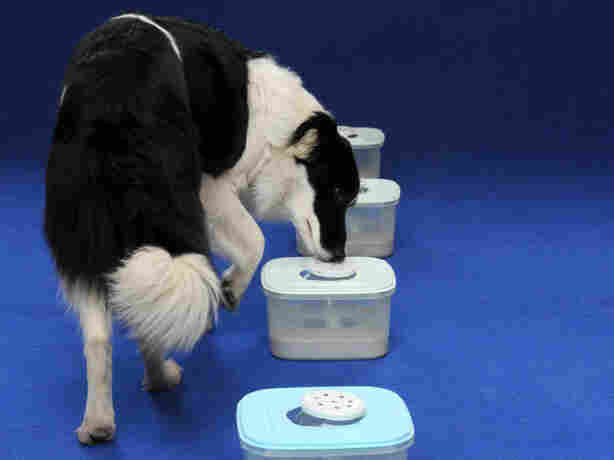 Panda, a Border Collie sniffer dog, checks out samples at the Dogs Against Cancer and For Life Foundation in Hungary. Barnabas Honeczy/AP hide caption 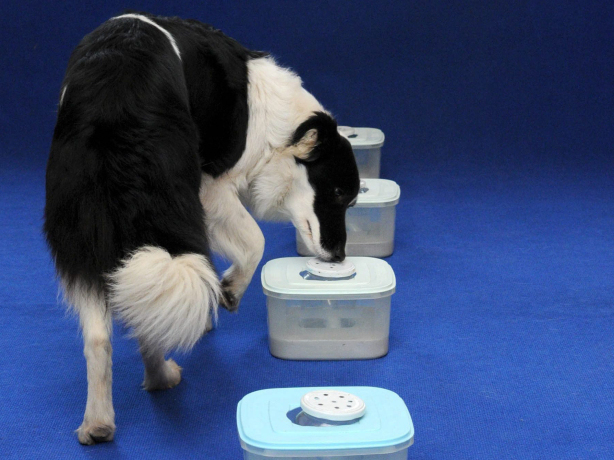 Panda, a Border Collie sniffer dog, checks out samples at the Dogs Against Cancer and For Life Foundation in Hungary.

The evidence just keeps mounting that ordinary dogs can be trained to use their noses to detect various kinds of cancer with near-perfect accuracy — better than any standard test for the disease.

In the latest study, Japanese researchers report that an eight-year-old black Labrador was 97 percent accurate in nosing out colon cancer when she was asked to choose among watery stool samples doctors collected from 185 patients with and without cancer.

The dog was almost as good at spotting cancer in breath samples. And when the researchers put breath and stool samples from patients with breast, stomach and prostate cancers alongside those from healthy people, the dog got those right too.

This all suggests, the authors write, that "common scents may exist among various cancer types." Their study appears in the journal Gut, an affiliate of the British Medical Journal.

The dog's "scent judgment," as the study authors call it, was not affected by whether patients were smokers or not, and the dog wasn't confused by other conditions, like inflammation or infection.

Moreover, the dog was equally good at sniffing out samples from patients with early-stage cancers as with advanced malignancies.

And all the dog expected as compensation was the chance to play with a tennis ball. She signaled which sample smelled like cancer by sitting down in front of it. She didn't sit when she smelled a sample from a patient without cancer.

The whole thing sounds bizarre, but a growing number of studies indicates it's not a fluke — or a hoax. Scientists who do these studies generally have been careful to make sure the humans in the room with the dog didn't know which samples were cancerous. This helps avoid the Clever Hans problem — the horse that appeared to solve math problems but was really responding to subtle cues from its handler.

Scientists' interest in canines as cancer diagnosticians began a dozen years ago with a case report that a household pet appeared to sniff out its mistress's melanoma. Another woman claims her dog became obsessed with her right breast, leading to the discovery of a cancerous lump.

Over the past five years, credible, peer-reviewed studies have shown dogs — of various breeds and ages and after only a few weeks of training — can become whizzes at spotting cancer in breath, blood, urine and tissue samples from patients with lung and breast cancers, ovarian cancer and bladder cancer.

Where is this leading? Well, perhaps not to dogs working in the cancer clinic just yet. "It may be difficult to introduce canine scent judgment into clinical practice," the authors of the new Japanese paper concede. For one thing, it's not cheap to train the dogs, and their scent ability varies between different dogs and even within the same dog on different days. Those factors make it hard to standardize a canine-based diagnostic test.

The more intriguing question is: Just what are these dogs smelling?

Some scientists are trying to find out using chromatography and mass spectroscopy, which can detect trace amounts of chemicals in a sample. (A dog's nose can reportedly discriminate at the parts-per-trillion level.) They hope to one day build an electronic nose as good as a dog's.

The answer to what dogs are smelling could shake up more than cancer diagnosis. It would probably shed light on what cancer is and how best to attack it at the molecular level.