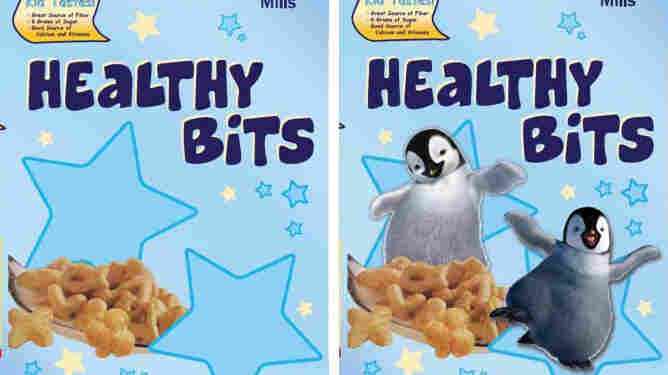 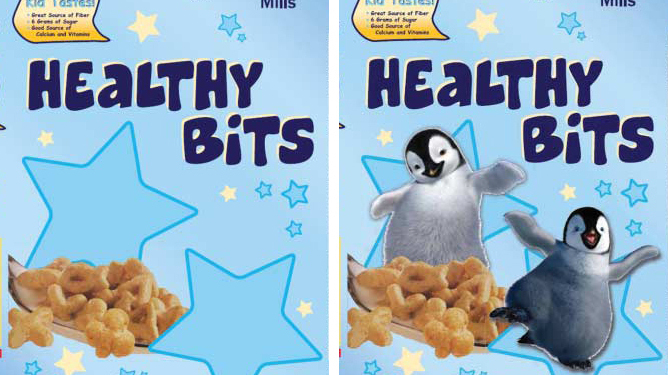 Courtesy of Matthew A. Lapierre

It probably comes as no surprise to most parents, and regular readers of our blog, that kids prefer the taste of cereals marketed with popular cartoon characters.

But a new study suggests that a box sporting Shrek or Dora the Explorer may also make children forget their reservations about unhealthful foods.

Researchers at the University of Pennsylvania's Annenberg School of Communication gave 80 kids (ages 4-6) an unfamiliar looking cereal from a box labeled either "Healthy Bits" or "Sugar Bits." Half the boxes were decorated with cartoon penguins; the other half weren't.

After seeing the box and tasting the cereal, the kids rated the cereals on a scale of 1 to 5 smiley faces.

To the researchers' surprise, the kids universally liked the Healthy Bits. Penguin or not, it earned about 4.5 smileys. Even more surprising, they rated the cereal labeled Sugar Bits significantly lower — less than 3 smileys — when it came from an undecorated box.

The results appear in the March issue of the journal Archives of Pediatric and Adolescent Medicine.

Why did the kids not go for the penguin-free "sugary" cereal? Hard to say exactly. But Matt Lapierre, one of the study's authors, tells Shots that "one of the explanations we've been working with is that kids grow up with this negative association with sugar."

So healthier eating habits may be resonating with kids after all, fueling their negative perception of the researchers' Sugar Bits faux brand.

But add a friendly penguin to the box and Sugar Bits rated just as high as Healthy Bits. The presence of a cartoon character was enough to override the children's misgivings.

The study concluded that "not only do appealing ... characters manipulate young children's subjective judgments, the resulting heightened preference
for food products featuring these characters is likely to contribute to unhealthy eating habits."

A five-year-old might pass on a plain box of Frosted Flakes, but add Tony the Tiger and they're grrrrreat.