Accessibility links
Was $105 Billion Really 'Hidden' In The Health Law? : Shots - Health News Rep. Michele Bachmann (R-MN) says she was shocked to learn that last year's health law included $105 billion in "hidden" funding that no one knew about. Democrats say the money is surprising only if one failed to read either the bill or the official cost estimates.

Listen
Was $105 Billion Really 'Hidden' In The Health Law?

Rep. Michele Bachmann (R-MN) says she was shocked – shocked – at what she only recently found out about last year's health law. 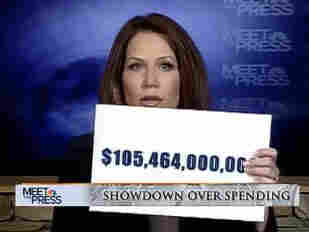 "There is a Congressional Research Service report that just was issued in February, and we discovered that secretly, unbeknownst to members of Congress, over $105 billion was hidden in the Obama care legislation to fund the implementation of Obama care," she said Sunday on Meet the Press. "This is something that wasn't known."

For one thing, the report to which Bachmann referred was an update of a report originally issued last October.

For another, the money was clearly spelled out both in the bill and in the Congressional Budget Office's estimate of its cost. "Michele Bachmann obviously didn't read the bill, because there was absolutely nothing hidden in that legislation," said Illinois Democrat and Chief Deputy Whip Rep. Jan Schakowsky, who serves on the House health subcommittee.

In fact, said Schakowsky, $40 billion of the $105 billion now at issue is for the Children's Health Insurance Program. That's hardly something that flew under the radar.

"There was a robust debate about whether or not that should be included," she said. "So this idea of somehow, now at the last minute, there was a secret addition to some kind of funding — I saw her hold up a sign on television, $105 billion — is absolute nonsense."

But Republicans on the House Energy and Commerce Health Subcommittee, who held a hearing on the disputed dollars, say it's anything but nonsense. They say that by providing mandatory advance spending under the sole control of the secretary of Health and Human Services, Congress is ceding its authority to the executive branch.

"We have created a slush fund that the secretary can spend from without any congressional oversight or approval," said Subcommittee Chairman Joe Pitts (R-PA).

Democrats, however, said there is nothing in the health law that Republicans themselves haven't put into plenty of laws when they were in charge.

Take the 2003 Medicare prescription drug bill, for example, which was passed with predominantly GOP votes and signed into law by President George W. Bush.

"That bill was chock full of mandatory goodies," said Rep. Frank Pallone (D-NJ). "There was the $1.5 billion to fund startup administrative costs for implementation ... and there was an unlimited appropriation to fund the transitional drug assistance program."

What's really at issue, Democrats say, is Republicans' continued attempts to try to undermine the health law any way they can. Said Rep. Henry Waxman (D-CA): "The legislative proposals being discussed today are marked by irony and hypocrisy."

When it comes to the health law, there's no sign that will end anytime soon.