Accessibility links
Radioactive Milk Only A Danger After 58,000 Glasses : Shots - Health News Reports of radiation-contaminated food in Japan have raised concerns. Here's a reality check: At the highest radioactivity levels detected so far, you'd have to drink an 8-ounce glass every day for 160 years to raise your lifetime risk of getting cancer by 4 percent.

Radioactive Milk Only A Danger After 58,000 Glasses

Radioactive Milk Only A Danger After 58,000 Glasses 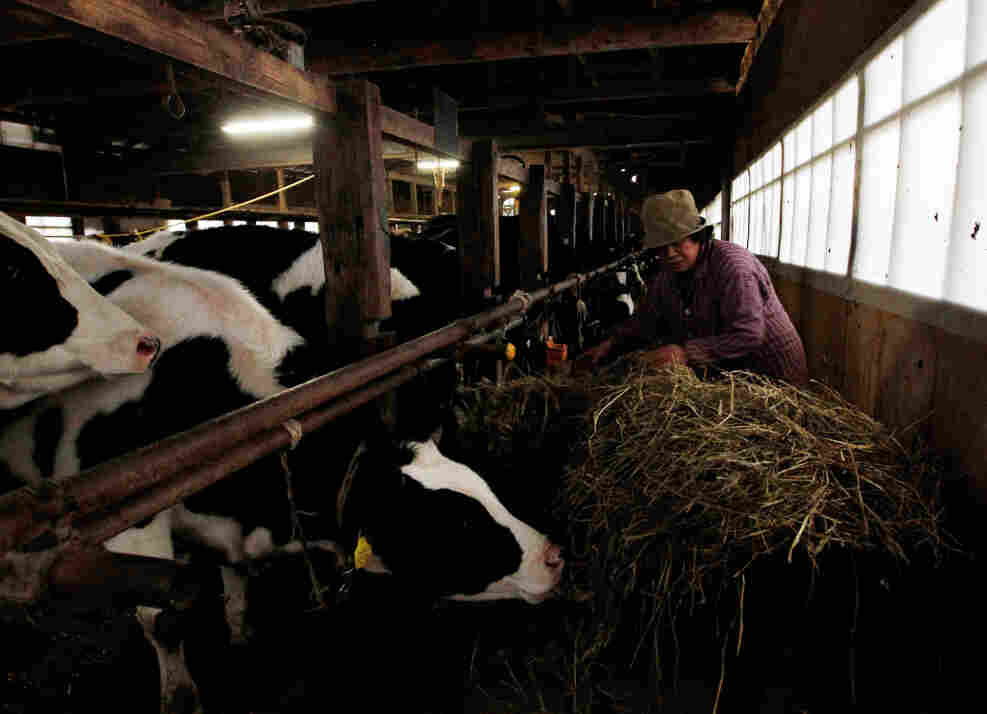 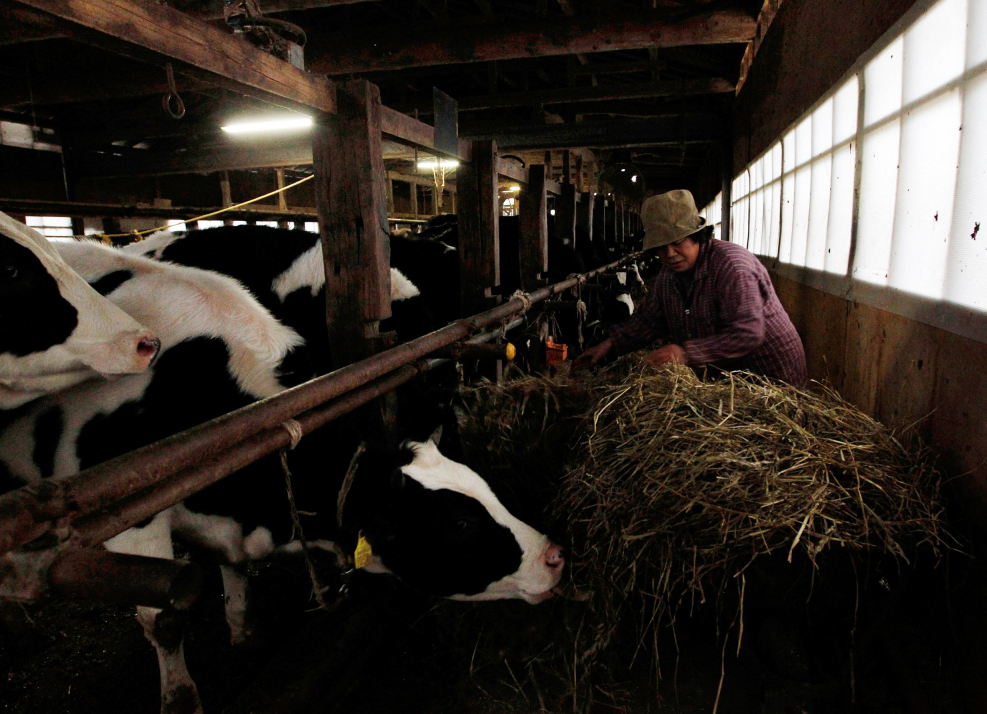 A woman feeds her cattle at a farm in Futamata, Fukushima prefecture, March 20, 2011.

The World Health Organization weighed in Monday on the risk of eating food contaminated by radiation emitted by the still-troubled Fukushima Dai-ichi power plant.

Peter Cordingley, a Manila-based WHO spokesman, told Reuters that the radioactive-food situation is "a lot more serious than anybody thought in the early days, when we thought that this kind of problem can be limited to 20 to 30 kilometers."

At Geneva headquarters, WHO spokesman Gregory Hartl told the Associated Press that Japan must act quickly to keep radioactive food out of the marketplace.

This calls for a reality check.

So I had an hour-long chat with Peter Caracappa, a health physicist at Renssealaer Polytechnic Institute in Troy, N.Y. He's been running some calculations on the radioactive iodine-131 and cesium-137 levels being reported in Japanese milk, spinach and drinking water.

Before we get into the details, Caracappa's bottom line is that the risk of ingesting even the most highly contaminated Japanese foodstuffs reported so far is very, very small.

"The long and the short of it is that we're not going to be able to detect any statistically significant change in the cancer rate for anyone as a result of the events in Japan," he told Shots.

To understand why, let's look at how the amounts of radioactivity found in spinach and milk from northern Japan in the past few days relate to two metrics:

We started with spinach. Its broad leaves tend to catch whatever radioactive dust is floating around.

Caracappa calculated for me the implications of eating the most radioactive sample of the vegetable reported so far — a bunch of spinach grown in the open air near Hitachi, a Japanese city about 70 miles south of the Fukushima power plant. Japanese authorities reported over the weekend that 2.2 pounds of this particular spinach sample contained 54,000 becquerels of radioactive iodine-131. (A becquerel is a measure of radioactivity.)

That spinach reading is by far the highest reported so far.

It takes a million becquerels to reach a nuclear plant worker's annual limit of radioactivity — and remember, that's not enough to do any measurable harm, in the short or long term.

Caracappa figures someone would need to eat 41 pounds of that Hitachi spinach to reach the nuclear power plant worker's annual exposure limit. "That's a significant amount of spinach," he allows.

But what about cancer? That's probably what most people worry about when they hear about radioactivity in food. Well, it takes 20 million becquerels to yield a Sievert's worth of exposure; remember, that's what it takes to increase a lifetime cancer risk by 4 percent.

That translates to 820 pounds of spinach – more than two pounds a day for a year.

Well, nobody eats spinach every day. But many people drink milk every day. And one lot of milk sampled from the town of Kawamata, 29 miles from the power plant, reportedly contained 1,510 becquerels of radiation per kilogram.

To reach the radiation dose limit for a power plant worker, you'd need to drink 2,922 eight-ounce glasses of milk. To raise your lifetime cancer risk by 4 percent, you'd have to drain more than 58,000 glasses of milk. That would take you 160 years, if you drank one 8-ounce glass a day.

But wait a minute. Consider this:

So unless the Fukushima Dai-ichi plant keeps releasing iodine-131 at the same rate it did one day last week, it doesn't seem as though there's too much to worry about.

And anyway, Japan exports very, very little milk – and, according to its Ministry of Agriculture, Forestry and Fisheries, no spinach at all.

Oh, and what about cesium-137? It's more worrisome, since a given amount takes 300 years to decay away to a non-radioactive form. But the few cesium-137 readings reported from Japanese foodstuffs so far show much lower becquerel levels. And cesium-137 doesn't get dispersed over nearly as wide an area as iodine-131.