Accessibility links
'Citizen Scientists' Crowdsource Radiation Measurements In Japan : Shots - Health News Amateurs armed with Geiger counters are taking radiation readings in Japan and sending their results to a website for mapping. Radiation experts caution the results, while intriguing, are prone to error. 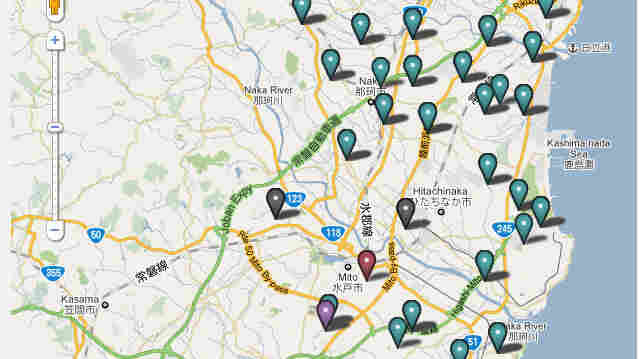 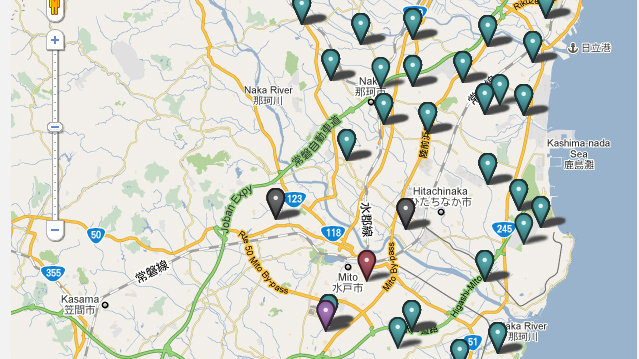 A cluster of radiation reading mapped by RDTN.org

Marcelino Alvarez was getting frustrated and a little paranoid last week as he watched news reports about radiation levels in Japan and plumes drifting across the Pacific.

"There were a lot of talking heads speculating about how this could happen or that could happen," says Alvarez, a Web developer, news fiend and all-around data junkie. "But not a lot of facts."

Alvarez got an idea: Enlist an army of citizen scientists to buy Geiger counters — they're advertised online for several hundred dollars — and send radiation measurements to a website for posting and continual updating.

"We thought there was something noble to the notion of having people purchase their own detection devices and post data," Alvarez says. "The word 'crowdsourced' has been used to describe this."

By last Saturday the Portland, Ore.-based group launched a website called RDTN.org — "radiation" without the vowels — and began putting up data on a map of Japan. Last we checked there were 100 or so data points from citizen scientists, official Japanese sources, and a data-aggregating site called Pachube.

Is this a good idea? Or the latest example of garbage in producing garbage out?

There's no question crowdsourcing is a great way of finding out what's going on in real time by aggregating the input of lots of people in Tahrir Square,Tehran or Benghazi. But what about technical data, of the sort measured in sieverts? Might that require some expertise of a kind citizen scientists shouldn't be assumed to have?

I put the question to a couple of experts in radiation detection and analysis.

Kim Kearfott, a professor of nuclear engineering and radiological science at the University of Michigan, sounded notes of caution. "Radiation detectors sometimes can read very high and sometimes very low," she told Shots. "It depends on the proper calibration. The device should be calibrated to the type of radiation energy it's going to be exposed to."

In addition, there's a lot of variation in background radiation in the environment, influenced by such things as altitude, rock outcroppings or mining operations, even nearby hospitals that do radionuclide testing.

"Perhaps most importantly," Kearfott says, "radiation detectors can become contaminated. If they do, they will give you very, very high spurious readings."

Keafott's all for "as much monitoring as possible," she told us. "But one must interpret the radiation reports on RDTN.org rather skeptically."

The other expert is Evan Douple, associate research director of the Radiation Effects Research Foundation in Hiroshima, which has been monitoring the health of atom bomb survivors for six decades. He agrees that calibration of off-the-shelf radiation detectors is "a big factor" in getting meaningful data.

"On the other hand," Douple says, "if the network becomes widespread, it could provide indications of hot spots or potential plumes or interesting activities. So it could be interesting, depending on how it's analyzed."

So far RDTN.org hasn't turned up any hot spots. But the network is still small. Expanding it quickly may be a problem, as Alvarez, the mastermind, acknowledges. There's been a run on handheld radiation detectors, so they're not so easy to get — even if lots of people could be persuaded to shell out a few hundred dollars to join the team.

"If we could get these devices cheaper and more dependable, it could be a network for radiation detection," Alvarez says. "We're nowhere near that level of sophistication. It most certainly is a work in progress and it's still too early to assess it."