Accessibility links
Why We May Not Learn Much New About Radiation Risks From Fukushima : Shots - Health News A leading radiation researcher in Japan says it will be tough to study health effects from the Fukushima accident in the population at large. The doses are likely to be small and very difficult to estimate. 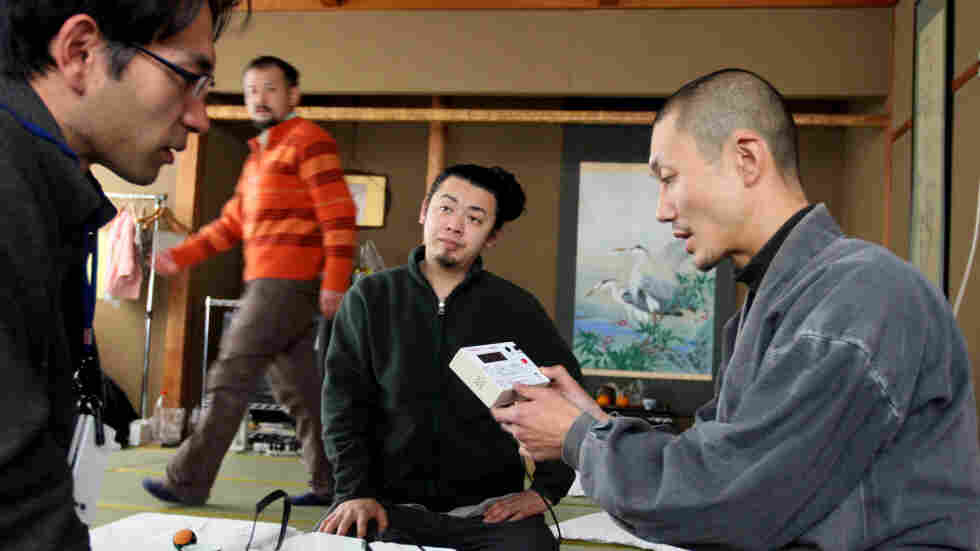 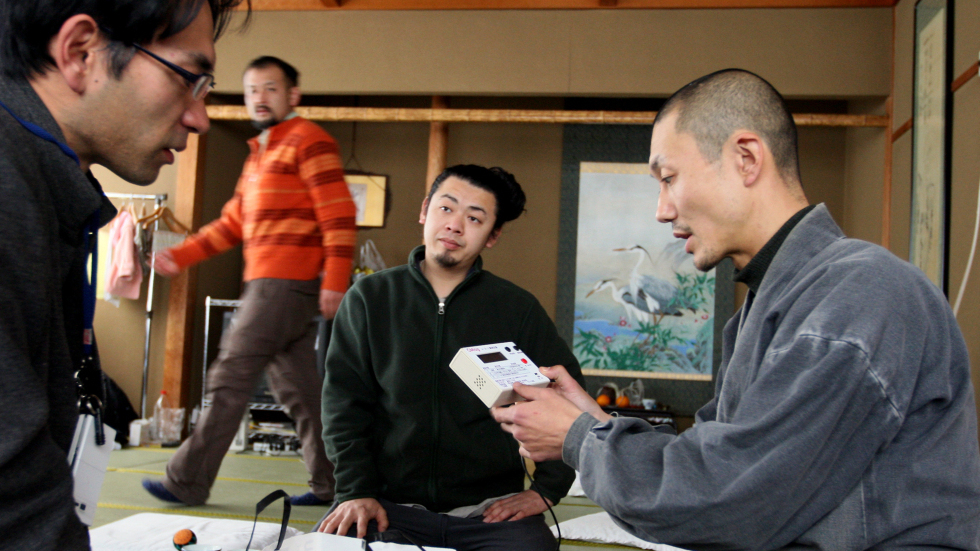 Japanese Buddhist monk Tanaka Tokuun, who was evacuated from Fukushima prefecture, looks over an instrument measuring radiation levels at a hotel on March 17.

To be more precise, doses below 100 millisieverts are in a gray zone. Safety standards — such as the one that limits drinking water exposure for infants to less than about 2 millisieverts — are based on extrapolation from the best data scientists have. Those figures come mainly from a 60-year study of health effects of the atomic bombs dropped on Hiroshima and Nagasaki in August 1945.

That was a unique research opportunity — and let's hope it remains that way.

But some scientists think the Fukushima power plant disaster — the second-worst nuclear power accident in history — offers another precious opportunity to learn more about what happens to people exposed to radioactivity in the millisievert range.

An article posted Wednesday by The New Scientist quotes experts who say there's no time to lose in setting up a study that would map radiation doses and monitor the health of those who've been exposed in the Japanese incident.

One of those experts points to the Hiroshima-based Radiation Effects Research Foundation as the obvious candidate to do the work. It has conducted the six-decade-long project following atomic-bomb survivors.

I called Evan Douple, RERF's associate chief of research, to ask what he thought of the idea. What he said surprised me.

Here are the highlights from our conversation, edited mainly for length.

What do you think about the idea of studying health effects from the Fukushima Dai-ichi accident?

I think it would be very unwise. There just isn't any evidence that there are enough exposed people at high-enough doses to expect to see any health effects that are measurable.

But even if it showed no health effects, wouldn't it be a good idea to use this opportunity to settle that question — or at least add more evidence on what low-level radiation doses actually do or don't do?

It just wouldn't work. We have no idea what actual doses people got. I would not expect to see significant new data emerge from that type of project. And it would take 30, 40 or 50 years to get an answer.

How did you do it in the Hiroshima and Nagasaki survivors?

Also, those 120,000 people received doses from just sub-lethal down to essentially no extra dose. So there's this complete range of doses with literally tens of thousands of people at each level. That's one of the important values of that study.

And you couldn't do the same kind of reconstruction of probable doses from the Fukushima power plant?

Exactly. Well, we don't know the geometry of the emissions. Most of it depends on weather conditions and changing wind direction. And people are moving, evacuating. It would be very difficult to reconstruct what their doses were as a function of time. Some have taken potassium iodide tablets, which confuses the issue.

Given what you said about the impossibility of doing the kind of long-term study you mounted of the atom-bomb survivors, can we learn anything from the current episode?

On the basis of our current estimates, there shouldn't be measurable numbers of cancers. So you won't be able to count them, ever. But once the dose estimates are put together and extrapolated, you should be able to make a crude estimate of the health effects, based on the RERF data. And I think that estimate will surprise a lot of people.

And they'll be surprised because?